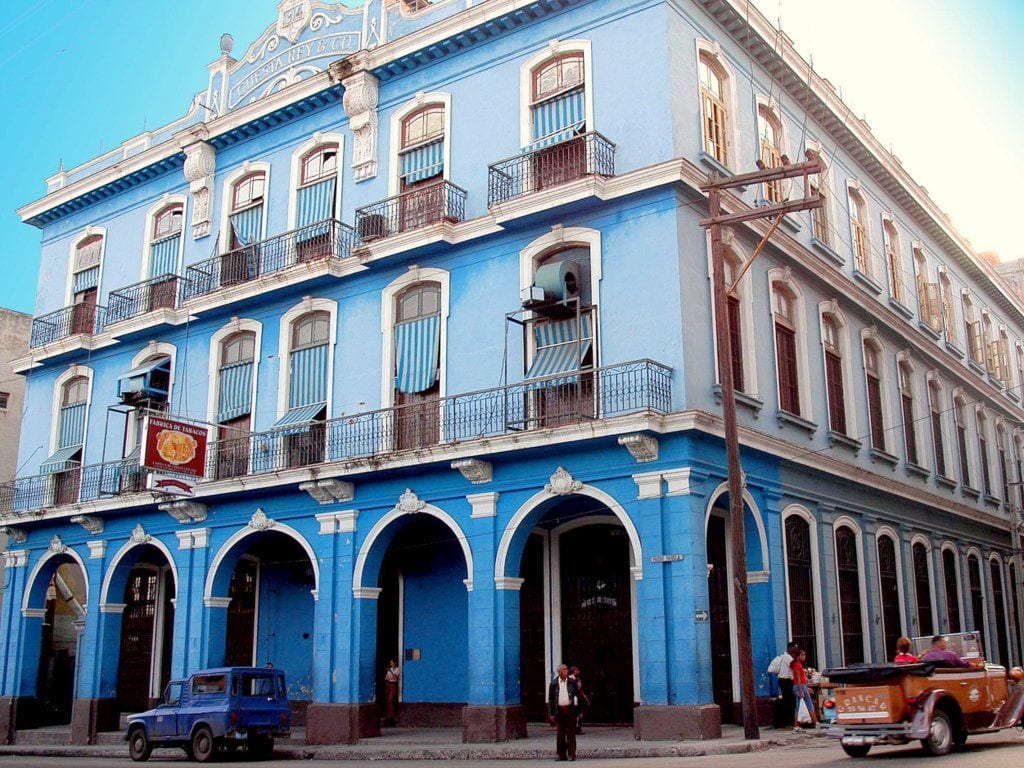 Of all the cigar factories in Havana, this one has the most names, by far. No wonder, when you consider its colorful past.

The best way to reach the factory is by taking a taxi from the Malecón, having it turn onto Calle Belascoain at the Hermanos Amejeiras hospital, and driving about a few hundred meters until you come upon a faded blue building on the right-hand side of the street. At one time, many factories were located here. A register from 1910 lists the following: Arsenio Perez (No. 54), El Credito (No. 88), Don Pepin (No. 2a) and Por Larrañaga (No. 2b). In the same neighborhood, only a block away on Calle San Carlos, the new Partagás factory is housed in the former domicile of Mark A. Pollock, the prominent tobacco warehouseman.

Cuesta-Rey – The Brand that Started it All?

Taking the statement on the building’s gable at face value, it appears to have been built in 1914. The gable also bears the inscription “Cuesta-Rey & Co.” – a brand, founded in 1884 by Angel LaMadrid Cuesta and Peregrino Rey, which was produced with Cuban tobacco in Tampa, Florida. 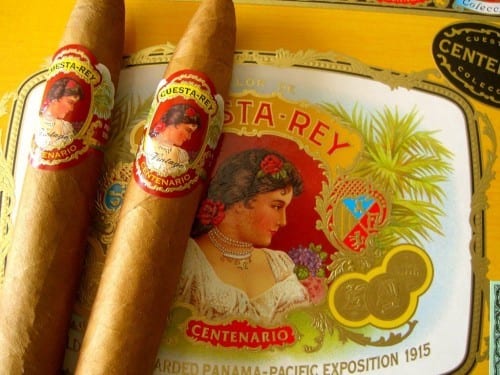 In 1958, shortly before the revolution, Carl Cuesta sold the business to J.C. Newman. Today, the Cuesta-Rey brand is produced at Tabacalera Fuente, in the Dominican Republic. In a trade directory from 1940, the building is listed as property of the El Rey del Mundo Cigar Company.

Let’s take a quick detour to follow the path of El Rey del Mundo, a Habanos brand that still exists today. We know that in 1910, production of El Rey del Mundo was still taking place at the La Meridiana factory, under the direction of the firm Díaz Hermanos y Cia.

El Rey del Mundo, along with the Sancho Panza brand, both likely created in 1848 by a German named Ohmstedt, was taken over sometime after 1870 by Antonio Allones, brother of Ramón Allones.

The brand’s main place of business, at least since the 1940s, was 852 Calle Belascoain. By this point, the manufacture was producing a total of 18 well-known brands, like Flor de Rafael González, Sancho Panza, Cuesta-Rey and Don Cándido. Even today, one still meets insiders who refer to the building as the El Rey del Mundo factory.

The building had further illustrious inhabitants in store, like the Romeo y Julieta brand. We know that in 1940, Romeo y Julieta cigars were still produced in the Don Pepin factory, a few hundred meters up the street. It’s hard to reconstruct exactly when Romeo y Julieta moved into No. 852. It’s most likely that the move happened after the revolution, during the state’s nationalization of the tobacco industry. The building’s façade features windows that probably date to the 1950s or 1960s and still bear the Romeo y Julieta inscription.

For many years, this manufacture, also known as the Briones Montoto factory, mainly produced Romeo y Julieta cigars. But what does “Briones Montoto” mean? Every post-revolution factory in Havana, and indeed in Cuba, has an official name; namesakes are frequently Cuban freedom fighters. For example, the old Partagás manufacture, located behind the Capitol, is officially named Francisco Perez German.

In the factory’s galera cigars are still produced today.

The factory at 852 Calle Belascoain bears the official name of Cuban revolutionary Antonio Briones Montoto. He fought during the Revolution in Cuba under the motto “I came to fight!” In May 1967 he and a group of like-minded brothers landed on the beach at Machurucuto, hoping to reach the Venezuelan revolutionaries in the mountains and support their struggle. Upon landing, they were ambushed and taken captive. The next day, Antonio Briones Montoto was dead. I suspect that the factory received his name in the late 1960s. Up until the year 2000, for around 40 years, the Romeo y Julieta brand was housed here. But as the building’s condition worsened, production was increasingly outsourced.

In later years, the factory served mainly as a training location for young torcedores. Every year, over 200 young people learned the art of cigar rolling here. At the same time, the building’s renovation was undertaken, and the factory is once again fully operational. Around two years ago, H. Upmann factory employees moved in. Tours of the factory are not generally permitted, but the Casa del Tabaco located in the building is very popular with cigar lovers.

DEDICATION
Most likely in 1914

LOCATION
A 10-minute taxi ride from the Capitol