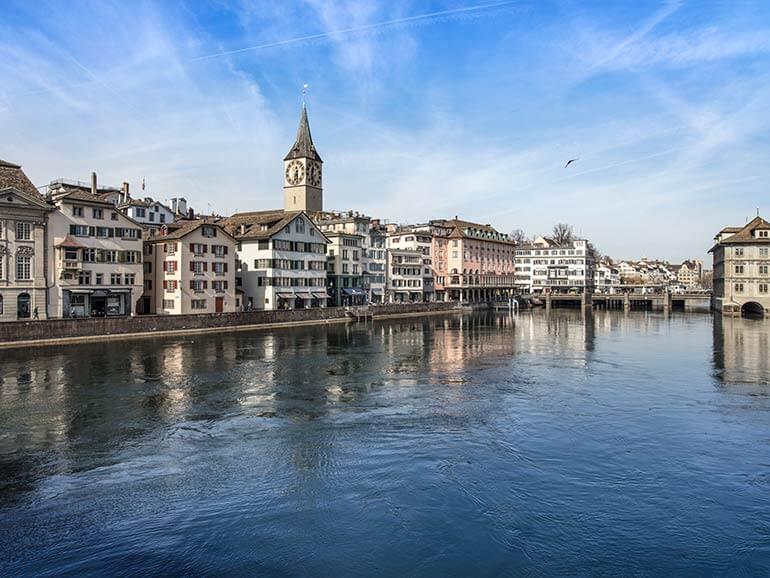 With its numerous lounges (fumoirs) and exquisite shops, Zurich is considered a land of milk and honey for passionados, even if the prices are above the European average. The Davidoff brand is an icon, hovering over the cigar scene: most tobacco dealers belong to the Oettinger Davidoff Group empire. It’s no wonder, for its Ukrainian forefather, Zino Davidoff, laid the first cornerstone for the brand in Geneva many years ago. Grüezi – welcome to the land of the connoisseur!

On the Davidoff Ship, I’m lucky enough to take part in one of the tasting events – cigars and top-fermented barley juice, hosted by a beer sommelier. The liquid is being poured into fine wine glasses, which breaks with convention, and is being served with a meal of grilled meat specialties – I find this to be genuinely enriching. Davidoff has its finger on the cigar-scene pulse. Opposite the train station, where Zurich’s luxurious shopping street begins, is where a Davidoff flagship store is nestled. For the very exclusive taste, there is the Davidoff Oro Blanco for 500 Swiss francs!

Behind Paradeplatz, Zurich’s financial industry center, I drop can drive there. The grand seigneur of the Zurich scene greets me with a welcoming smile. Many years ago, he was elected an Hombre del Habano. He welcomes his customers with his own mischievous smile, which is also captured in a portrait taken with Fidel Castro. It hangs in the window of the Casa, which was one of the first ones founded in the world. Prominently positioned in front of Menzi’s elegant walk-in humidor is a photo of the famous Swiss photographer René Burri (1933-2014). His portrait of Che Guevara, taken in 1963 in Havana, garnered him worldwide fame. As early as age 13, he managed to get Winston Churchill in front of the lens in Zurich; later also Picasso, as well as the sculptor Giacometti. “René liked buying cigars from me,” discloses Menzi, and proudly shows me postcards from the customer who became a friend. In the meantime, Menzi is giving advice to an American customer; he decides to take a Partagás Serie D No. 4 (CHF 14.90 – the Casa’s best-selling cigar – and also one of the most expensive in the selection, the Cohiba Espléndidos (CHF 45.30).

Answering my question as to why the cost of Habanos in Switzerland is way over the European average, Menzi doesn’t have a definitive answer. “That’s a difficult question. We have the strongest currency, the lowest tobacco tax alongside a moderate value added tax. Why, then, such high prices?” he even asks again. And as we are parting he recommends the Aura Cigar Lounge directly opposite.

In the ancestral homeland of the Oettinger Davidoff Group there are also niches for exotic outsiders. One entrepreneur from Geneva offers the exclusive El Septimo Diamond Collection Fabuloso Dark Ruby (CHF 70.00). The trendy boutique cigar from Costa Rica with a chocolate note is recommended to me by Manuel Fröhlich. The one-time online cigar dealer is forging new paths with his shop and lounge, Manuel’s – Cigars, Coffee, Rum, in times of rigorous smoking bans. At Manuel’s there are monthly specials, such as Griffin’s Classic Robusto in the 25-count box for the special price of (CHF 232.00). In addition, Fröhlich, who is also a Davidoff distributor, was honored in 2016 as Bester Davidoff Newcomer. “I go into the walk-in humidor with my customers; we choose the appropriate cigar together,” says Fröhlich, who can offer an almost complete Habanos selection. He then takes me to the basement, where Ediciónes Limitadas as well as other specialties have been stored since 2000. To one guest from France he recommends the Juan Lopéz Eminentes Edición Regional Suiza 2016 (CHF 24.00), a puro in a Sublimes format. As a Habanos specialist, Fröhlich has also accumulated an exclusive vintage collection. “It’s unique in Switzerland. My oldest cigar is from the year 1960.”

Manuel Fröhlich is an elegant, casual man of the house; just like magic, he’s always there, at the right place at the right time, on all floors. He greets his guests with a handshake, charmingly supported in the team of eight by his wife, Jessica. The ex-model from Havana also rolls cigars at Manuel’s. The mostly younger guests sit on benches in the lounge or in armchairs at chess tables. Also popular are Manuel’s rum tasting flights; in the pleasure boutique there are 300 types.

In Zurich, the celebrated fine smoke that traverses all social layers also includes brass musicians. As I indulge in a Davidoff Exclusive Zurich Edition 2017 (CHF 30.00) in the elegant cigar lounge in Hotel Storchen, I observe, totally amazed, a smoky rendezvous that I have never seen before on all my worldwide travels. From the window of what was once the “Shippers’ Guild,” I witness how the Fricktal Jagdhornbläser band dressed in traditional costume are puffing away on cigars before performing on the Storchen terrace. It’s no wonder that they won the Swiss championship!

A while later, I am told by René Wagner, owner of the renowned Tabak Lädeli right next door to the five-star Storchen hotel, that the Jagdhornbläser band members had bought their Flor de Selva Petit Coronas (CHF 8.20) upon his recommendation. “I made the fine cigars by Maya Selva from Honduras popular in Switzerland,” he says. “Today, sold per stick, they are my bestsellers,” he emphasizes. Wagner, an institution in the Zurich cigar scene, has nestled into the epicenter of the smoking scene close to the attractive Limmat Promenade in a small, fine shop. The Swiss, dressed in extravagant cloth, courageously wears an orange-colored tie. He is just as intrepid in the selection of his cigars. “Habanos make up the largest share in our range, and the Punch Supremos Edición Regional Suiza 2015 (CHF 25.20) is particularly popular with tourists, Wagner informs me, who likes to travel to the south coast of Central Cuba for fly fishing.

He carries his independent assortment of top brands from all the good tobacco growing regions and is not afraid of having an unconventional selection. His affinity for Padrón Cigars from Nicaragua was established through a personal meeting years ago. What about an Edición Limitada 50th aniversario in a Toro format (CHF 55.50)? The less wellknown Patoro Gran Añejo Reserva Corona (CHF 22.00) is also trendy at the moment. 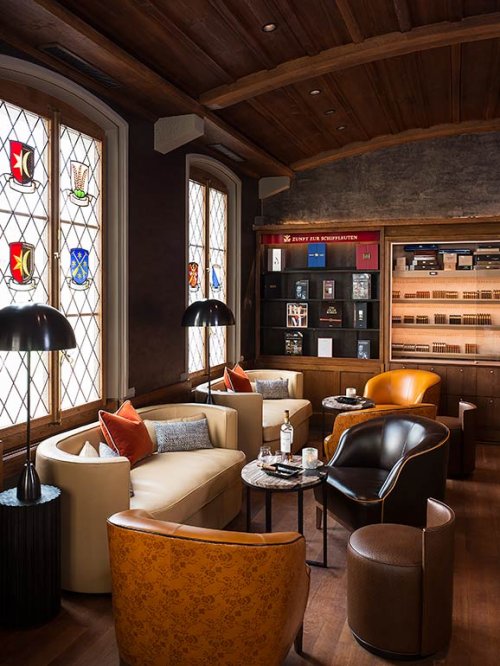 Lounge with history: In what was once the Shippers’ Guild, finde cigars can now be enjoyed in Hotel Storchen | Photo: Gabriela Gress

Following my visit with the bustling, likeable René Wagner, who has been a member of the Cigar Journal tasting panel for years, I decide to smoke a cigar to relax in the lounge of the Storchen, Zurich’s oldest hotel, and renovated this year. I am greeted by head barkeeper Sascha Waernecke, who, as assistant bar manager at AIDA Cruises, travelled to all the Caribbean islands. “The 35 cigars on our cigar menu are organized by strength,” he says, surprising me, and recommends the Robusto Cain F (CH 15.00) from Nicaragua that is strong in aroma.

Those wanting to celebrate their fine smoke in the early morning hours in style and elegance is welcome at the Storchen. “We close when the last guest leaves,” says Sascha. Among his treasures is the Patoro Torpedo (CH 58.00) and the very exclusive Davidoff Limited Edition Royal Salomones (CH 116.00). “Habanos lovers like to order specialties like the Romeo y Julieta Pirámides (CHF 29.00) from me, or an H. Upmann Magnum 50 (CHF 24.00).” The barman, who comes from Frankfurt, also spoils the Zurich cigar club guests with fine rum, such as the Ron Zacapa Centenario 23 Solera Gran Reserva.

Before I arrive in this truly “proper lounge” for a smoke, on the terrace of the Storchen gourmet restaurant La Rôtisserie I indulge in a Zurich-style stew. Because the sun is shining, I allow myself an after-dinner cigar outside: what a pleasure here, right at the Limmat River with a view of the famous Münsterbrücke and pretty 17th century guild houses. In the distance, on Lake Zurich, the snowcapped peaks of the Alps glitter. When I’m then proffered some homemade Storchen pralines, my Swiss idyll is perfect. I ponder over the fine, smoky plume of my light Davidoff Grand Cru No. 3 (CHF 14.34) and wonder in all earnestness: Why travel such great distances when the beautiful Switzerland is so close …