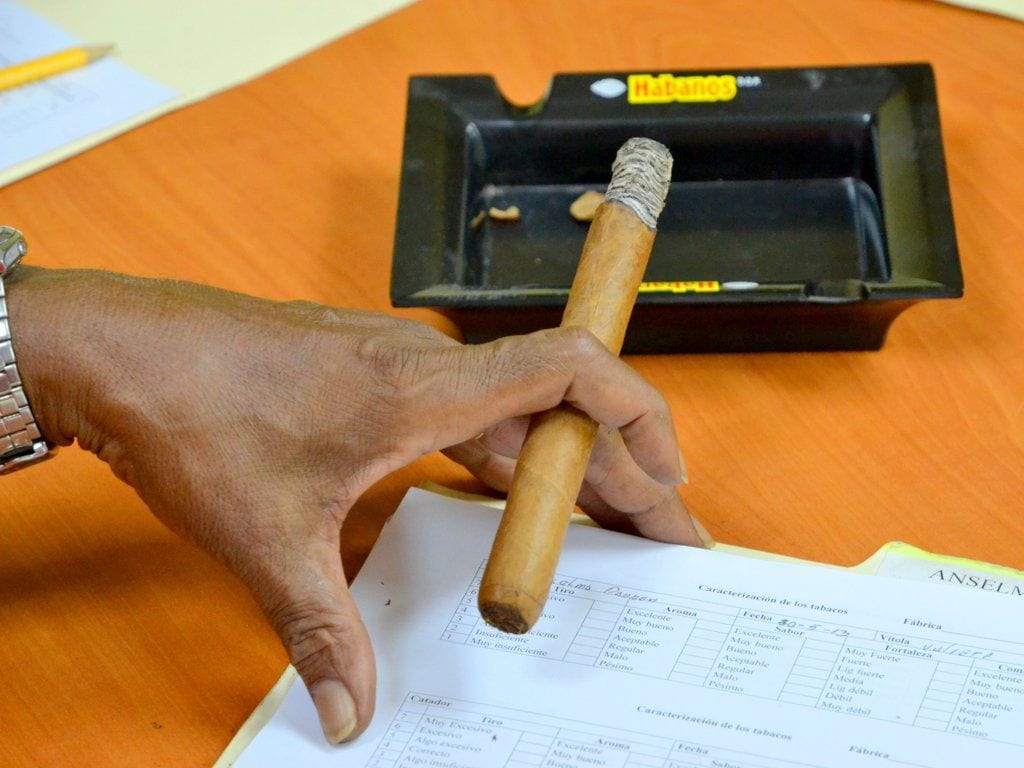 Gerardo Álamo Gómez wears a blue mechanic’s smock. He’s spent the morning at the Partagás factory, making repairs; as a mechanico industrial he is responsible for the cigar manufacture’s machines and electronics. (The factory has been temporarily relocated to Havana’s Calle San Carlos while the old building undergoes renovation.)

Each day, shortly before noon, Gerardo takes a break from his work and makes his way up to the second-floor commission de degustación. You see, this mechanic is a member of the factory’s catadores: he is one of twelve Partagás test smokers.

Not all committee members are present on this particular Thursday in early June. Some of the catadores, also cigar rollers, are traveling abroad, demonstrating their craft on world tour; others are on vacation. That’s why I’m lucky enough to take a seat at the table and taste along with them. We’re going to smoke a Habano with vitola de galera Julieta. First step: we sniff, considering the cold cigar’s fragrance. Then we light it, and the tasting begins.

At Partagás, test smokers are chosen through a competition; the committee of catadores is completely reconstructed every two years. Any factory employee, from a cigar roller to a mechanic or even the canteen cook, can throw his or her hat in the ring. It’s a coveted position: more than 50 hopefuls apply each cycle. 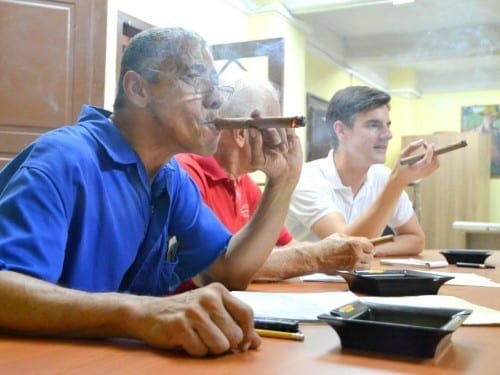 In order to make it to the next round, candidates must first prove their ability to taste. They must first arrange five glasses filled with water that tastes sweet, salty, sour, bitter and neutral in the correct order. Then it’s time to smoke.

All candidates receive three cigars: two identical ones and one that deviates in taste. Those who are able to detect the variant taste make it to the next round. This triangulation test is repeated until there are 12 catadores left.

It isn’t just dumb luck that gets candidates through the final round: three catadores in our session are longtime team members. Judith Sobrino Casanova is primarily an escogedora at Partagás, responsible for sorting cigars by color. But her sensory talent has already taken her far. She was a participant and finalist in the Habano Festival’s first blind tasting.

In addition, she’s a member of the Cuban national tasting committee, the cata general, called in when cigar manufacturers develop new products. Other test smoking veterans in our round include Anselmo Paorón Guerra and Alexander Martinez Garcia. Anselmo is a familiar face on the scene, having previously been a catador at the H. Upmann manufacture. We’re all smoking the same format, but our cigars have been rolled by different torcedores. How is it possible to exchange notes about quality when each person is smoking a different cigar?

The catadores reassure me that their extensive experience allows them to reliably judge the quality of a cigar by themselves. We write the number of the torcedor who rolled the cigar on a testing sheet in front of us, which features the additional criteria that we’ll use in our evaluation. Most important of all: the draw. The evaluation is completed with the use of a draw machine. Because cigars are chosen at random for both the catadores’ proceedings and draw tests, systematic draw problems are reliably revealed.

No Perfume or Soap

We sit together at a large table. Behind us are a couple of smoking cubbies with separable walls, but these are only used during competitions, for example during the qualifying rounds of the Habanos Festival’s blind tasting or for the catadores commission’s selection process. 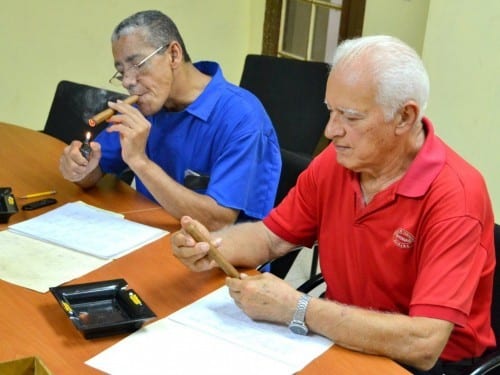 Now we rate the taste, the aroma and the strength of our test cigars. Taste develops on the palate, aroma is revealed to the nose. Catadores are meticulous about detecting potential foreign odors. “Torcedores are only allowed to wash their hands with water,” as the scent of soap or perfume can be imparted to the tobacco, explains Gerardo Álamo Gómez. It’s especially important to use caution with expensive, drier, longer-cured tobaccos, because they absorb foreign odors like a sponge. Catadores must also pay attention to the consistency of a cigar’s taste. Because the cigars are later sorted by color, and each box will inevitably contain exemplars from several different rollers, each cigar must be absolutely identical in taste to the others.

Cigar rollers must not develop individual styles. When a cigar does not meet a brand’s desired flavor profile, the catadores find out what went wrong. First, they discuss the problem with the responsible torcedor. One of the major challenges in the production of a handmade Habano is that rollers have to maintain the correct blend proportion with every single cigar. (They receive the tobaccos for their day’s entire production all at once, and are responsible for dividing them accordingly.) 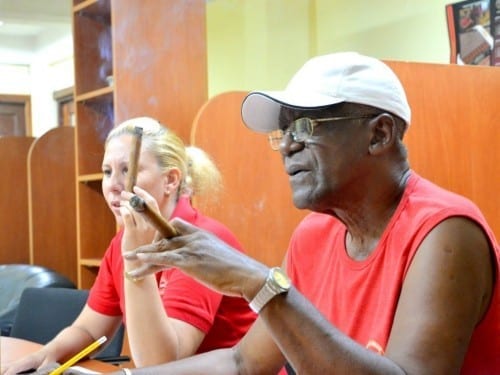 In addition to their daily business, catadores are also responsible for test-smoking the company’s new products. These are often Ediciónes Regionales, sometimes Limitadas or new standard formats. For example, the Partagás Lusitanias Gran Reserva Consecha 2007 was smoked for the first time at this table.

The catadores give the maestro ligador their feedback; if they’re happy with the product, the master blender seeks a second opinion from another factory’s catadores. Finally, he calls in the cata general, a panel composed of the country’s best tasting experts. Its members discuss the new product with the responsible torcedor and the maestro ligador.

So what do Cuban tasting experts think about florid cigar descriptions like foresty, earthy, wooden or other imaginative descriptors? The catadores mull it over. Yes, it’s true that cigars with a higher percentage of ligero can indeed present a woody, cedary aroma. 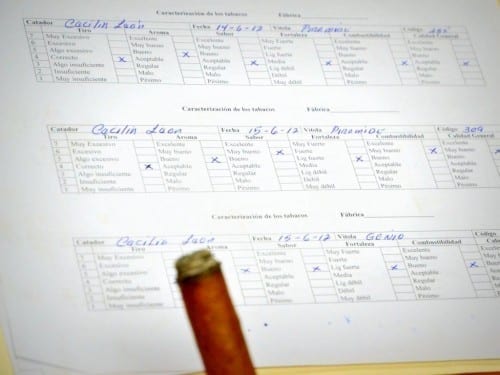 First and foremost, though, these professionals think in the categories seco, volado and ligero. They are capable of determining a Habano’s exact blend ratio solely on the basis of its taste.

We’re smoking a Bolívar Coronas Gigantes, the catadores reveal casually. It was child’s play for them to figure it out, even though we’re smoking blind. Usually the catas (as they are affectionately known) smoke three cigars each session, one per hour.

Our Habano is nearing the punto de verdad, what Judith Sobrino Casanova calls the precise moment at which she is able to make an informed evaluation of the cigar.

In order to do so, she has to have smoked at least the first third. I decide the verdict on the Calidad General for myself: excelente. Before Gerardo Álamo Gómez returns to his usual work as factory mechanic, he stops to talk to the torcedor who rolled his cigar. “I don’t just criticize,” he explains. “Today, I’m here to give my compliments.” 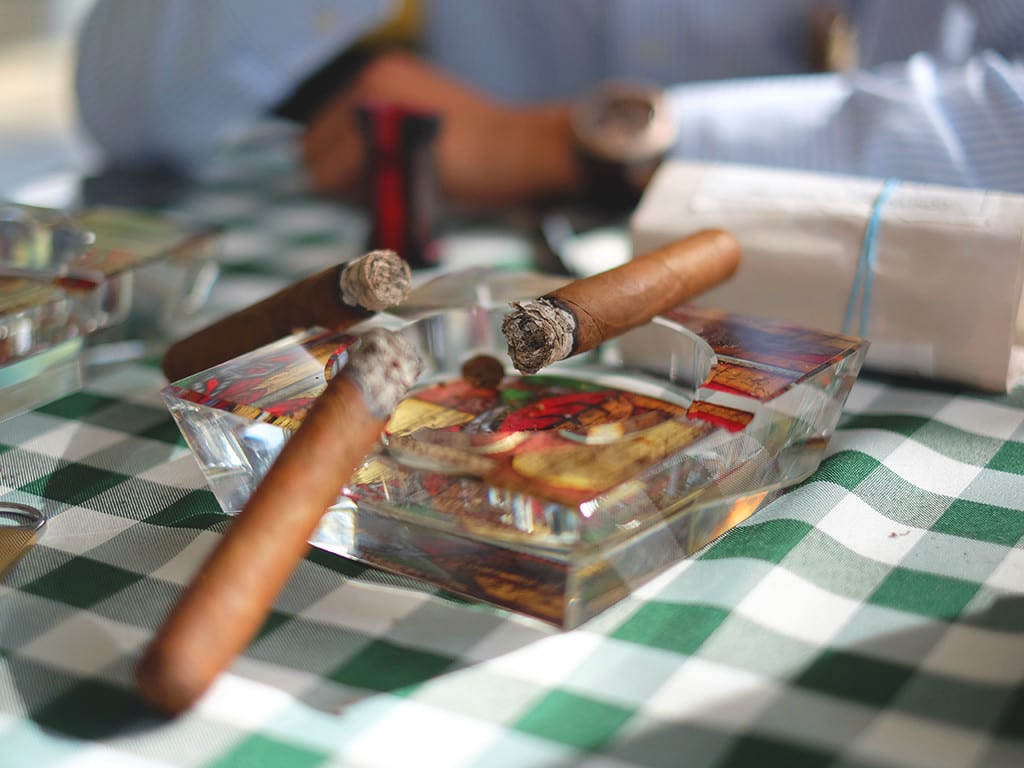 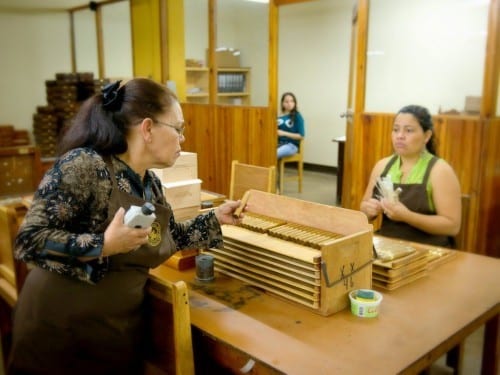 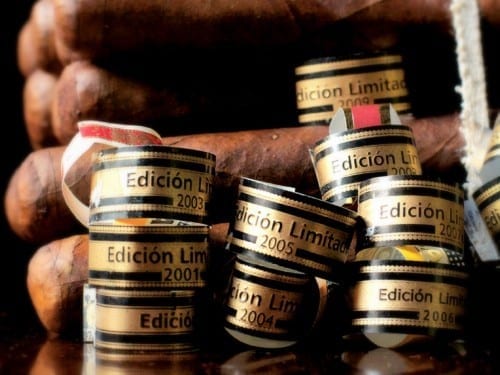