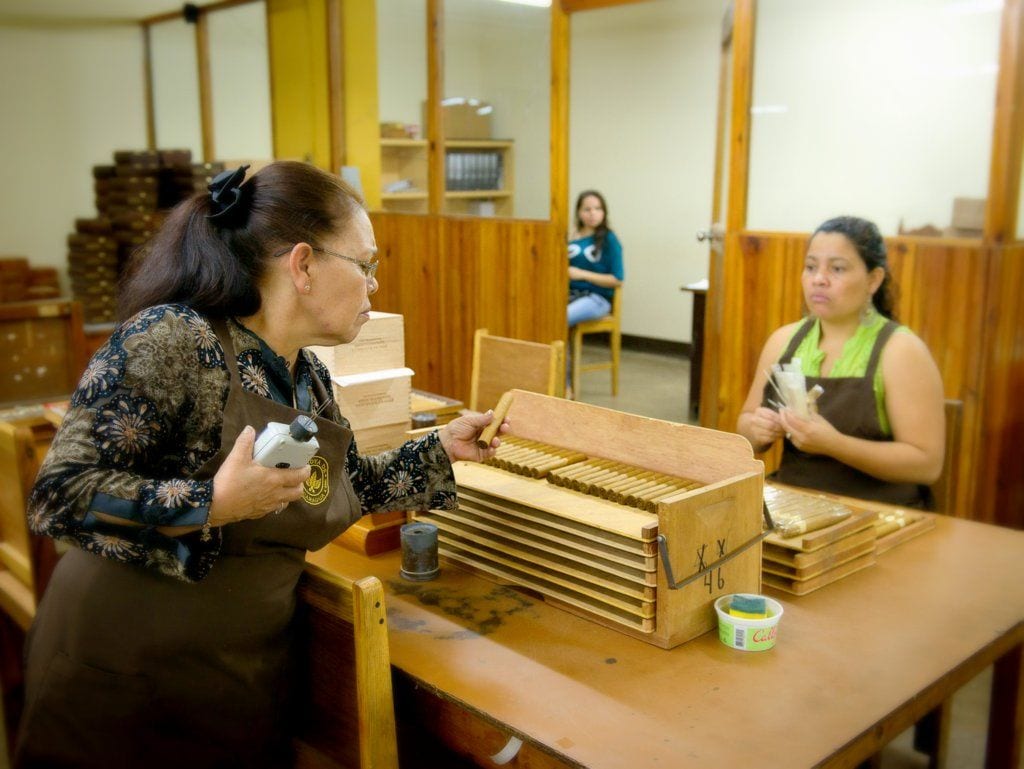 In the village of Santa Cruz, outside of the cigar Mecca of Estelí in Nicaragua, the working day starts early for Francisca del Rosario González Aguirre, or Panchita as she is commonly known. At 4.30 in the morning she gets up to make breakfast in a dark kitchen, lit up by a fairly weak energy efficient light bulb hanging from the ceiling. The food then goes into a thermos that sits on the table in the gray cement-walled living room until it’s time to go to work, which actually isn’t until almost two hours later.

For 18 years she’s been responsible for quality control at Joya de Nicaragua, the oldest cigar factory in Nicaragua, where she started working in 1968 at the age of 12, the same year it opened.

She began as a Despalilladora (tobacco stripper) and has since then done almost everything there is to do within the art of cigar production, and she’s enjoyed it all. “It’s all been fun. It’s very important to me to constantly learn new things,” she says.

“I learn from my colleagues and they learn from me. I’m not better than them or anyone just because I’m a quality inspector. We work together and help each other. The most important thing is to be humble, not too proud.”

The reason she started working in the industry was her sister. “She worked there, so she invited me. At the time there weren’t many other jobs around. As I was really young I also studied to be a secretary at the same time.” In 1978 she became a secretary, which she later temporarily worked as for three years in the Nineties.

The sun is rising; time to leave the six grandchildren who live with her, her daughters and husband, Miguel Angel Pineda Jimenes. The bus stop is only a few steps from her house, which is located right next to the Pan-American Highway, the main transport vein of Central America. She grabs her thermos, hugs the two younger grandkids and gives her husband a kiss. After 34 years of marriage the instant impression you get is that they’re still very much in love. “It’s all about communication,” Miguel says. “We’ve been married for 34 years and we talk about everything. Couples that don’t talk, separate.”

Panchita is happy with what she’s got. “I don’t worry much because we don’t lack food on our table. God always provides us with what we need. I don’t care about getting a big house. My husband and my family who live with me in this humble home make me very happy. In this house we know we’re united by love.”

Instead, her greatest worry is how long she’s going to be allowed to work at Joya de Nicaragua. “I’m 56 years old and the age of retirement is 60. I would like to keep working after that, but I don’t know if they’ll let me. So I’m a bit concerned about what else I should do with the years I have left, if God allows me to live longer.”

As we walk over to the bus stop Panchita feeds some grass to some illegally enclosed deer in a corral. During the 15-minute bus ride to Estelí she sits up front by the dashboard on an otherwise packed bus. Everybody seems to know her, as is the case in the factory. Although she says that they all ask each other about work things it seems like she’s the one giving the advice. Then again, if you’ve worked in the same company for 44 years you’re bound to know a little bit more than most people. It also means that she’s seen all the changes the recent history of Nicaragua has brought to her workplace.

When she started, the factory was called Nicaragua Cigars and the country was governed by the family dictatorship under Anastasio Somoza. In 1979, the socialist guerilla, FSLN (Frente Sandinista de Liberación Nacional), overthrew dictator Anastasio Somoza Jr., and the factory was nationalized. “After the triumph we were under the direction of President Daniel Ortega, but that also meant that we didn’t really know who the owners were.” When the Sandinistas lost the election in 1990 the factory was handed over to the employees, who started looking for a suitable buyer. In the end they decided to sell the factory to Dr. Alejandro Martínez Cuenca, former Minister of Foreign Trade in the Sandinista Government.

“Since the former administration had taken everything, we were handed a company without anything left, so we started knocking on doors. We chose Dr. Martínez Cuenca because he offered us more options than the others.”

Once again privatized, the name of the company was changed by Martínez Cuenca, who still runs it today. “I prefer it the way it is now,” says Panchita. “The conditions we work in are better and we know what’s going on in the company. We also have a lot less bureaucracy. In the Eighties there would be one person for each administrative responsibility, but administration has been reduced, for the better.”

Part of Panchita’s job is making sure that every box has been shipped out for export. So the first stop of the morning is her small offi ce and a look through some of the binders to make sure everything from the day before adds up. The rest of the morning is spent in packaging and the third stop in quality control.

We check that they’re rolled perfectly. All the steps of quality control are equally important to detect low-grade labor.

“In the morning I start by checking the humidity in the cigars, but I basically do all kinds of things here,” she explains. “I see to it that everybody’s doing their work properly and if new material comes in we have to check that. I check off the boxes for export on the shipment list and make sure the weight and content of each package are correct.” As soon as Panchita enters the factory it’s obvious she enters work mode. Even though she seems like a quite focused and determined woman outside of work, it’s even more apparent at work. It’s important to do things right. Something that’s even more noticeable in the second part of the day, after lunch, which she spends upstairs in the second-stage quality control.

Our Jobs Depend on Doing a Good Job

“I’m looking for inferior quality cigars. It could be that the texture isn’t what it should be, that it’s too loose or too hard. We check that they’re rolled perfectly. All the steps of quality control are equally important to detect low-grade labor. I’m not going to fi nd them all, but then somebody else will.” And she definitely takes pride in what she does for a living. “The challenge for me is to be aware of everything bad that could happen and to make sure that everything goes well. That’s something all employees need to do since our jobs all depend on us doing a good job.” The day is coming to an end and the rollers and bunchers are all leaving the factory in disarray through the loading dock at the back of the building. Meanwhile in the packaging room, Panchita is discussing a cardboard box with her colleagues. They’re weighing it and comparing the label on the box with the shipping list a few times before they decide to open it up.

“The weight didn’t match what is said on the list, and indeed it turned out it was one cigar case short,” she explains. The mistake is repaired and then, finally, she gets to remove her cigar-colored apron for the day and walk out the backdoor like everyone else. It’s about five o’clock and we walk down the Pan-American Highway to catch another equally packed bus back to Santa Cruz. “When I come home I sit down in front of the TV to relax for a while. Since my daughters live with us they take care of the house, so I can relax when I come home. At around nine I go into my room to pray and spend some time with God.”

As with most people in Nicaragua, God plays a big part in Panchita’s life. She calls herself Catholic, but unlike most she doesn’t go to church and she doesn’t want to be affiliated with religion.

“I’m not Catholic because I go to church. You don’t have to visit a church to seek God because we have the bible, his words, and that’s what we need to realize where we need to improve. Religion doesn’t give me or anyone else anything. We don’t live for religion, we live for God to whom we must pray. We live for Jesus, who is the one who gives us light and guides us forward.” We barely make it off the bus before Panchita once again is embraced by her grandchildren. Soon after Miguel appears and a kiss later we enter the house. A motorcycle is parked in one corner of the living room, over the door opening to the kitchen hangs a crucifix and on one of the walls Lady Guadalupe is keeping a protective eye out for the family.

Panchita heads straight for one of the two chairs, which are obviously hers and Miguel’s, opposite the Virgin Mary icon. The TV is already on and we arrive in the middle of an episode of “La Patrona,” one of countless Latin soap operas. The kids are running around, curious, not really able to keep their eyes away from what’s happening on TV. It doesn’t take long until Miguel joins her. And that’s where they will sit for the next hour or so, until it’s time for sleep, prayers and appreciation for the day – and the one that will follow. 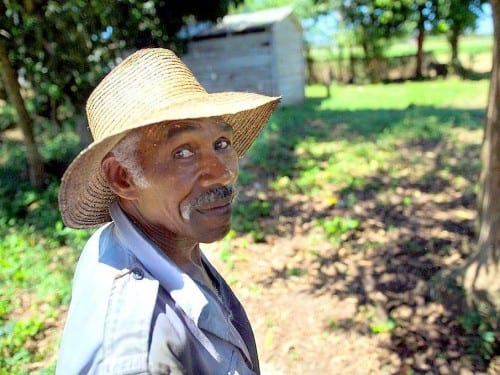 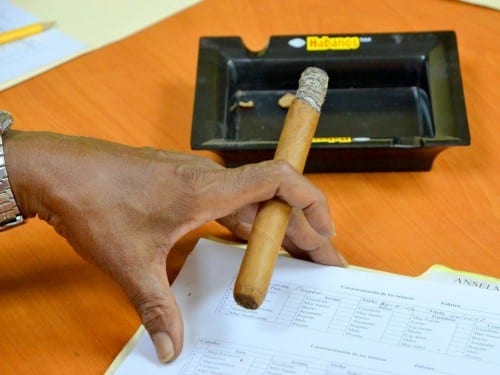