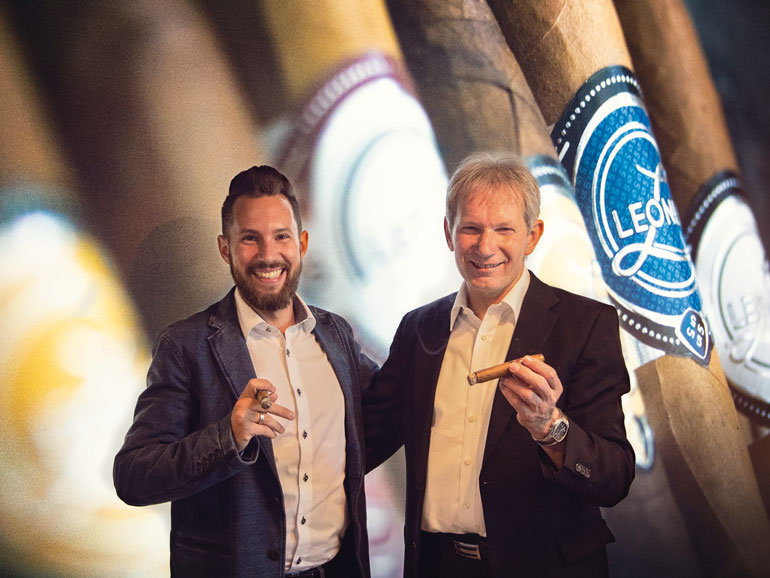 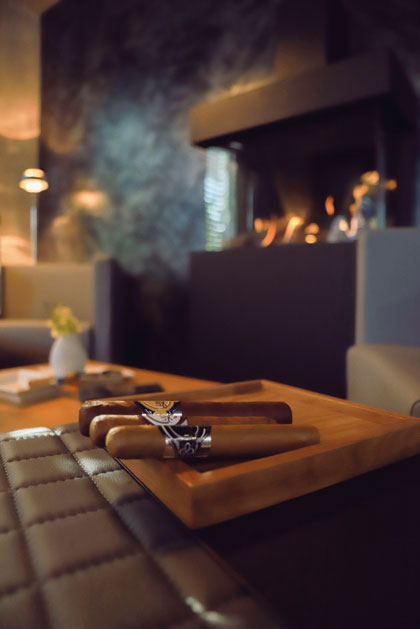 The Leonel Lounge draws passionados from near and far

Before we experience this cigar paradise, we drive through the industrial zone of Schwenningen and park in front of a medium-sized, flat-roofed building. We still don’t suspect anything. Junior manager Daniel Höldke opens the door, and then it happens. The star gate opens and we are welcomed to a space that could exist in any popular cosmopolitan city. We’re looking at a reception counter, on the left the Leonel Lounge and on the right the Cigar Academy. A glass door in the background makes the heart beat faster. Here is the treasure chamber, the humidor. But more about that later. “The lounge and academy areas can accommodate 25,” explains Daniel Höldke. “The designer was the same one who designed the Weber Grill Academy.” The branding of the large visitors’ room is friendly, tidy, clear and very good quality. While we talk in the Leonel Lounge and taste the newest cigar from the series of Bugge’s own brand, the Leonel White, there’s a lot of coming and going. Passionados are buying supplies for the weekend; others are smoking a cigar at the neighboring table in the comfortable leather chairs and collecting around the lit open fire for a Friday chat. 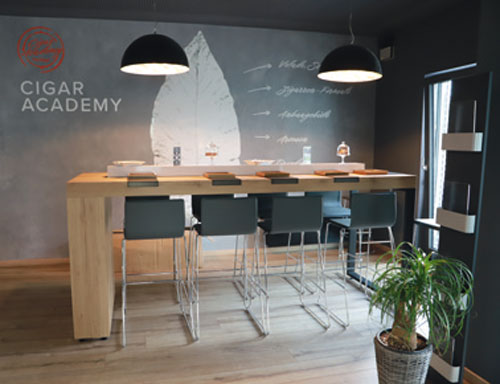 The Cigar Academy is very popular with both customers and distributors

THE CIGAR ACADEMY
When the company made the move to the industrial zone at the end of 2017, all the plans were well thought through; the Leonel Lounge was placed in the reception area and the Cigar Academy was installed. Regular seminars are held here, run by the senior manager, Norbert Höldke. There’s a standing table that can accommodate eight; if there’s a bigger group, the lounge can also be used. “We offer introductory courses, but also continuing educational seminars for connoisseurs,” Norbert explains the concept. Specially designed booklets offer participants support through during the tasting. “Pioneer smoking” is done here, which means that future potential blends for new Leonel cigars are tested by customers in the academy. A reason for why the company has flourished so much is that it accommodates customers’ wishes. The Höldkes also stay true to this principle in the Cigar Academy: “We offer events but also organize seminars according to desired dates and subject matter,” Daniel Höldke affirms. At the new headquarters of the longestablished company of Paul Bugge, over 500 m2 everything is housed under one roof: the visitors’ area, the humidor, the distribution and wholesale areas, the staff offices and even a small photo studio. Originally, storage and distribution were separate from direct sales. The historical Paul Bugge shop in downtown Villingen still exists, but in the meantime the main focus there is on pipes. “And in our humidor you’ll find everything that you can get on the German market, when it comes to cigars – that, and no less, is our claim”, the junior manager explains. “What we have in our humidor is what we sell online.” In any case, the numbers speak for this: in the heart of the store, 75,000 cigars are stored in more than 5,000 boxes within 30 m2; the length of the shelves is roughly one kilometer. 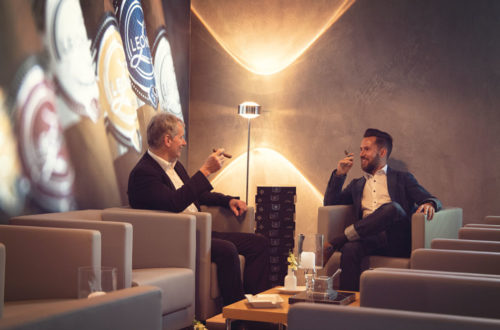 CLOSE TO TOBACCO
Slightly separated from the sales humidor but still open to visitors, the cigars are stored for wholesale, such as Oscar Valladares cigars or Cavalier Genève, but also numerous Leonel cigars. Not long after Norbert Höldke took over Paul Bugge, the enthusiastic cigar smoker began to be interested in manufacturing and importing. Quickly and comprehensively he acquired more knowledge about tobacco. As soon as his son Daniel, for a while now also a proven tobacco expert, was on board, they started the production of their own brand. Leonel was born – meanwhile the cigars are sold in ten countries by 500 tobacconists. “We work closely with our partner manufacturers, for example with Casa Alegria in Estelí; it’s almost like working with family and there’s a lot of mutual trust,” say father and son, unanimously describing their cooperation. “For us, consistency is important, slow and solid growth. I think our partners are on the same page; they invest and plan projects long term,” says Daniel. The company Paul Bugge also has a fair-trade philosophy: The Höldkes reached an agreement with their partner manufacturers in Central America to buy 100 percent of the harvest from the farmers, to pay the employees above the average wage, and that they receive health insurance and social security. “Values like these mean quality for the product, in the end,” says the junior boss, convinced. Because Leonel and wholesale trade ran so well, the company increased its workforce from 25 to 40 within two years, with an upward trend. Support is good and necessary. Because the duo often travels to the partners in Central America and even buys raw tobaccos themselves because they want to be close to the tobacco, having a strong Paul Bugge crew on site is important.