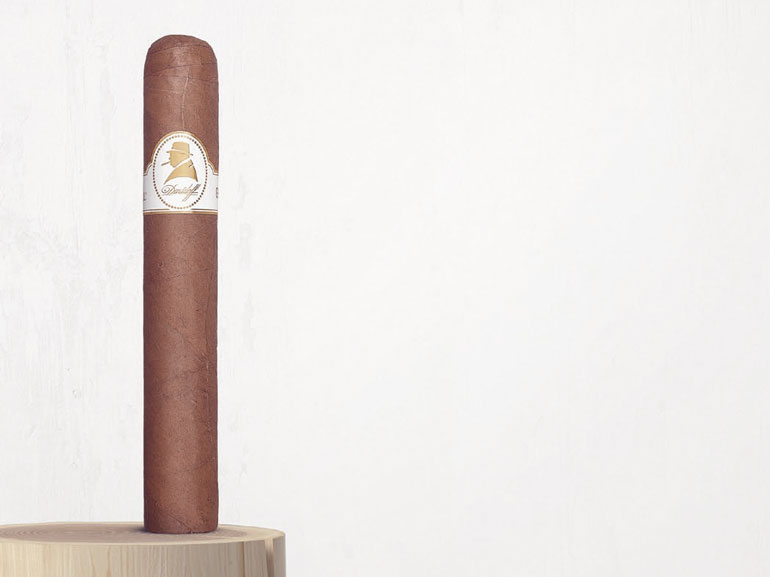 There are few cigars that have become absolute classics. Cigars that are literally on everyone’s lips. So when a cigar from a venerable house marries with the name of probably the most famous cigar smoker in history, it is not surprising if it becomes a box office hit.

In the specific example, it is worth mentioning that the cigar itself is also a masterpiece and has rightly achieved world fame. We are talking about the Davidoff Winston Churchill. The line was first launched by Davidoff in 2008 and after moderate success finally re-re-leased in 2014. Since that time, the Winston Churchill has been a best seller of the very first order. This time I would like to enjoy with you a Robusto of this line. Let us get to the bottom of the myth and find out what makes this cigar an incomparable pleasure. What elevates it to the Olympus of rolled tobacco and what surprises does this classic still have in store for us?

Make yourself comfortable, pour yourself a small glass of something, pick up your smart phone, scan the QR code, and let’s smoke a Davidoff Winston Churchill The Statesman Robusto together. It is a Robusto in its purest form (133 x 20.6 | 51⁄4 x 52). On average, the price ranges between EUR 19.00 and 22.00. Let us find out together whether Sir Winston would have enjoyed this classic cigar, and whether the blend can still inspire today – many years after its release. My cigar is already prepared and just needs to be lit. I am waiting for you, and I would be happy if you joined me … 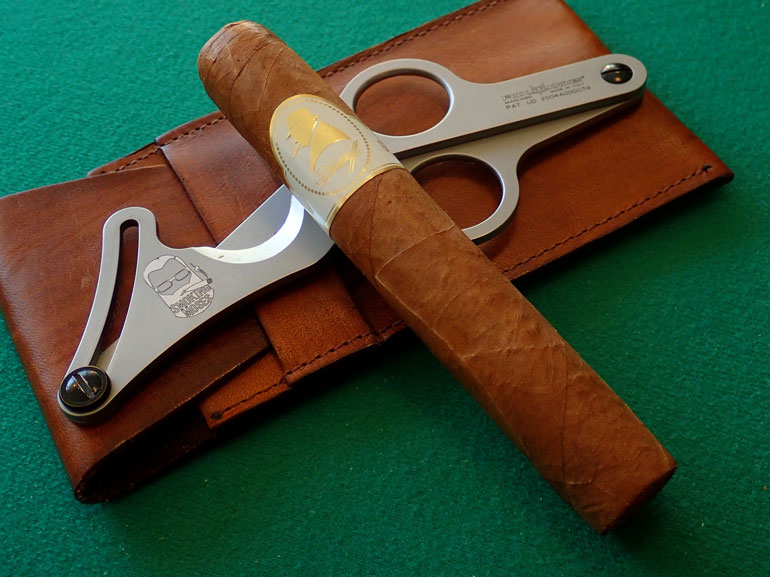 There is probably no cigar smoker more famous in history than Sir Winston Churchill. Most recently, this icon of the cigar was congenially embodied by Gary Oldman in the film Darkest Hour. The cigar smoke was staged so realistically that the main actor had to visit the hospital with nicotine poisoning during filming. So when a cigar bears the name of Winston Churchill, it inevitably has to meet high expectations.

I am happy that you have found your way to our joint smoking salon again today and that we can celebrate an icon of the tobacco world together. This time we want to smoke the Davidoff Winston Churchill The Statesman Robusto. Make yourself comfortable and join me through the mists of pleasure on a journey through the world of clever, smoking minds. As a drink, by the way, I recommend – perfectly British – a nice cup of black tea (preferably Assam or Darjeeling) with a little milk. Grab your favorite cutting tool as well as a source of ignition, and sit back.

After lighting, immediately after the first two draws, you will be surprised. Because, contrary to most descriptions of the Davidoff Winston Churchill series, the inclined Passionado is greeted by a wonderfully subtle sweetness. The creaminess typical of Davidoff can only be noticed subtly. Smoke slowly and not too greedily, even if the wonderful aroma easily tempts you to draw faster. Sip the cigar and let the smoke roll gently through your oral cavity. Especially at the beginning of the first third, it is recommended to smoke retronasally. This Robusto is certainly medium-bodied, but very finely and wholesomely blended. So there is no unpleasant scratching lurking in the nose.

After a few draws, you can calmly put this perfectly crafted cigar in the ashtray. There is probably no other cigar brand that is so famous for its excellent manufacturing and the exorbitantly high expectations of quality and draw. Treat yourself to a sip of your black tea with milk. This spicy creaminess wonderfully complements this successful cigar. Particularly interesting is the mouthfeel that the Winston Churchill The Statesman Robusto leaves behind on the palate. The spiciness can already be discerned; there is also some wood to be detected on the tip of the tongue. One definitely has a desire for more.

Pick up the cigar again. Don’t worry, the short moment in the ashtray has been good for it. The smoke is now much cooler, and in the middle of the first third, although the sweetness continues, it is joined by the aforementioned spice. The nose is now tickled by a touch of gingerbread and a hint of cardamom. The smoke appears to be especially dense and almost fat and buttery. Enjoy this moment, because it is, to say the least, simply divine!

The silky H2000 wrapper from Ecuador sits delightfully between the fingers and gives the cigar its subtle creaminess; the spiciness and sweetness is probably due to the Negro San Andrés binder from Mexico. The filler of Dominican and Nicaraguan tobaccos forms a perfectly balanced base for this wonderfully digestible blend.

At the beginning of the second third, take another small break. Watch the smoke rise and form beautiful dancing flags that are nothing more than the banner under which the epicures of this world unite. So, even in these fleeting moments, the spirit of Sir Winston seems to hover in the room. Take another sip of tea and wet your mouth. Because what follows now is a truly brilliant main act.

The second third of the cigar is the appearance for the next big player: leather! But these hints of tanned leather are by no means so dominant that they could disturb the overall impression. Both the sweetness – which now fades far more clearly into the background – and the spice remain. The smoke keeps its density and the draw resistance is almost uncannily perfect. None of the multi-layered flavors push themselves too clearly into the foreground. It almost seems as if they are performing a tightly entwined dance that is meant to enchant our senses. And it succeeds. Sip the cigar again before putting it aside once more.

Indeed, it may well be that this cigar would have pleased and tasted good to Sir Winston as he trudged slightly stooped through the narrow corridors of the War Rooms in the heart of London one afternoon, entirely with the weight of the free world on his shoulders, heavy with decision making and discouraged, yet full of drive.

Reach for the cigar again and enjoy the second half of this delicacy. The aromas of spices now diminish, leaving a composition of leather, chocolate and a hint of freshly roasted coffee, while far back the sweetness present since the beginning gradually takes its leave. The spices now also carry some pepper that stimulates the flow of saliva. Retronasally, one senses an incredible punch of coffee, chocolate and leather, wrapped in wood notes that are surprisingly reminiscent of oak. There is now an incredible variety of flavors in each delicate puff. What is particularly remarkable is that the cigar never seems strong or overpowering in the process. It is only the aroma that gives us a robust impression.

Before the last third – the grand finale – take heart, and put the cigar in the ashtray. Allow yourself a brief moment of contemplation, and also enjoy the wonderful room aroma of this successful creation. Review all the impressions of the cigar once more: the gently sweet beginning, the spiciness in the transition, and the leatheriness of the middle part.

Pick up the cigar again, and devote yourself to the final puffs. What began with a delightful chocolatiness, now becomes a touch of delicately bitter cocoa. And this bitterness of farewell is now joined once more by the sweetness that we thought had already left us completely. It is as if she is waving goodbye to us with one eye crying and one eye laughing. When the last hint of sweet cocoa has faded away, put down the cigar. For now there is nothing left to discover but bitterness and parting pain.

So has this cigar now earned its place in the portfolio of the traditional house Davidoff? Absolutely! It is creations like this that give the house all the honor. And Churchill would certainly have been delighted with it – whether in times of war or peacefully behind his easel completely lost in thought.