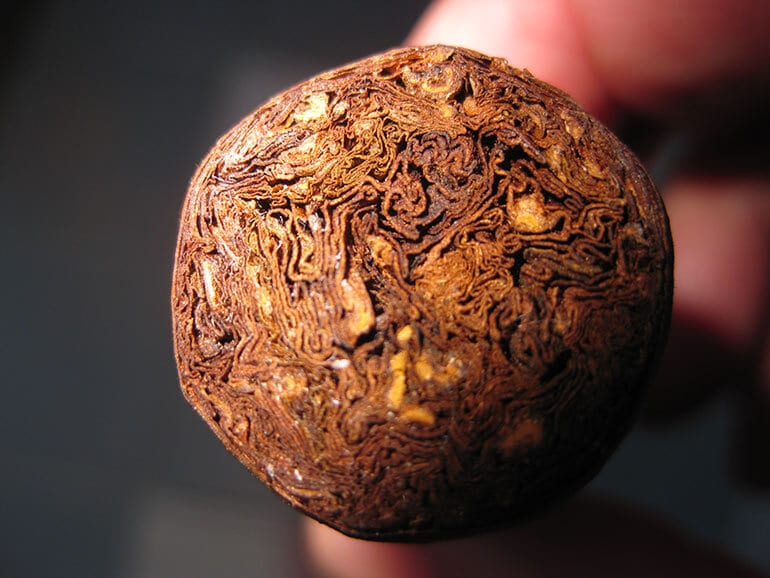 Cigar rolling is a skilled art. In Cuba it has been done in same way for almost 200 years. The master blender (Span: Maestro ligador) knows the recipe for every brand and every format. The cigar rollers collect the day’s tobacco ration from the barajita, where the mixtures (ligadas) are prepared, and take their places at their work tables. A torcedor does not need much to practise his craft. Apart from a table and chair, all he needs are the following: a solid wooden board, a special knife, a small round cutter to cut out the cap for the head of the cigar, a guillotine, a pot of tasteless vegetable glue and a gauge to check length and ring gauge. Above all, he needs experience and the skilled hands that come from years of practice.

The roller lays the filler leaves (tripa) out in piles from left to right in front of him. Then comes the binder (capote), and – finally, at the far right, the wrapper (capa). The thick central vein of the filler leaves has already been partially removed so that, with a little imagination, the leaves look like a frog with back legs (frog-strips). Now comes the first step: shaping the bunches (bunching). The bunch is the semi-finished product, usually consisting of three to five filler tobaccos and the binder, which is rolled around them.

Yolanda Medina was one of the first torcedoras. Today she is demonstrating her craft in the Hotel Melia Habana. First, she lays the binder with the underside to the board, so that the large veins in the leaf are pointing upwards. In this way, the veins will be on the inside when the cigar is rolled. Only stripped half-leaves are used as binders. For the larger format, two or more binder leaves are placed next to each other in such a way that they overlap. There are various methods for taking the filler tobacco in the hand and shaping it. In descending order of difficulty for the roller they are: entubado, accordion, book and Lieberman (which is a manually operated semi-automatic machine that makes the rolling process considerably easier).

This is the classic method. It was actually developed in Seville at the end of the 17th century; originally it was only the tobacco that came from Cuba. For this, the filler leaves are formed into individual rolls that are then placed next to each other and formed into a bunch. The ligero leaf is placed in the middle of the filler. This is a very strong, spicy leaf, which burns slowly. It is what gives the cigar its strength. The seco leaf is aromatic, spicy and burns reasonably well. It gives the cigar the necessary balance. The volado is mild and burns easily. The individually rolled filler leaves allow the smoke to move freely through the finished, cylindrical cigar; the smoke must pass through all the leaves, and thus carries more aroma and flavour to the palate. A well-rolled cigar produces a cool, slow and even burn. The torcedor then completes the bunch (Span: bonche) by rolling them in the binder. The cigar must be rolled from the head (the end that goes in the mouth) down. During this process the filler must be evenly packed along the full length of the cigar. The foot of the bunch (end that you light) is trimmed using a guillotine or a chaveta. The finished bunch is placed into a mould, where it will be pressed for at least 30 minutes. In order to ensure that the cigar is evenly shaped, the mould is opened once and the bunch turned.

In his Tabacalera Perdomo in Nicaragua, Nick Perdomo employs the classic entubado method. Whenever he goes into the factory building he is greeted according to old Cuban custom by the torcederos drumming their chavetas on their table tops. Rather than wooden boards, the work surfaces in the Perdomo factory are made of steel, as it is easier both to work on and to clean. The fact that this means the knife has to be sharpened more frequently is simply accepted. Tony Perdomo is Nick‘s uncle. The brawny factory manager for the family firm considers it highly important that the tubing of the filler tobacco really is in 360 degree rolls. Once again, the strong, slow-burning ligero is on the middle, followed by the seco and the viso, as the volado is called here. Some filler tobacco is also pressed into the foot end to create a veritable aroma explosion as soon as the cigar is lit. At Perdomo they set great store by quality control, as Sarah Gonzales ensures. Including the time she spent as a master roller in Cuba, she has worked in the industry for 36 years. Ten draw machines stand ready to test every individual roll for draw resistance before it is released for nishing.

Similar to the entubado method is a variant which Jonathan Drew of Drew Estate jokingly refers to as “lazy entubado” in his beautiful Gran Fabrica in Estelí in Nicaragua, namely the so called estrujado (from estrujar: press). Here another leaf is wrapped around the filler tobacco before the binder (Jonathan Drew calls it a “base”). It is also interesting to note that in the Nicaraguan factories a buncher (bonchero) and a roller always work together in a team of two. Women have a more delicate touch, and that is why the responsibility for rolling the cigar in its wrapper falls to them. In Cuba the torcedor makes the cigar entirely on his own. 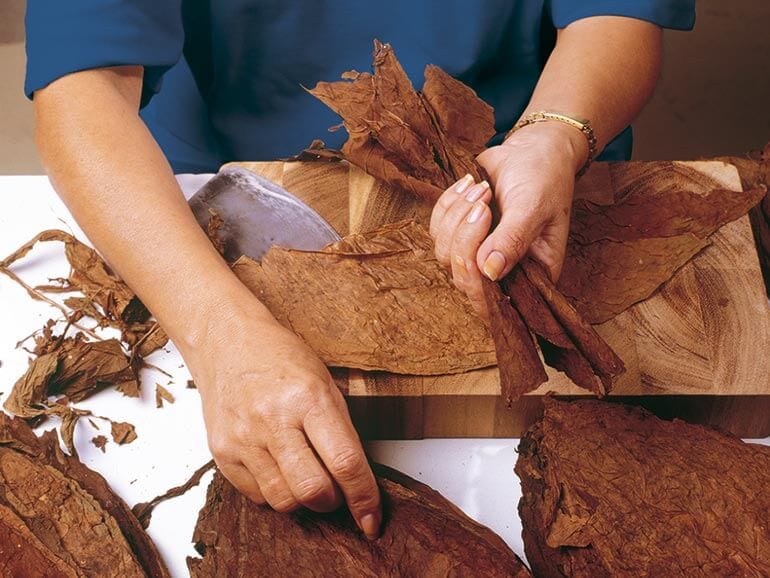 In this bunching technique, every individual filler leaf is folded from the outside in. The leaves are laid one on top of the other until the filler is complete. Then, just as in the entubado method, they are wrapped in a binder. Brian Scholle of Studio Tobac (Oliva), who likes to show off his art at rolling demonstrations, is a fan of this method: “The folded filler leaves make for an excellent draw. If the filler tobaccos have been too tightly compressed you can get draw problems, as is sometimes the case with entubado.”

If you cut open a cigar lengthwise, or, better still, what is left of one, you can separate out the folded leaves like an accordion or a fan. Nick Perdomo argues that the triple folded leaves in accordion bunching can easily break when pressed. Nonetheless, this method is very common since it is less time-consuming. It is also much easier to master than the entubado method, and the roller’s productivity rate is much higher. With entubado rolling a torcedor can roll between 120 and 150 cigars a day depending on the format, with accordion rolling between 200 and 250.

Here the individual leaves for the filler are laid at one on top of each other and then folded together like a book or a taco, and the filler is ready. It is simpler than either entubado or accordion bunching. The structure of the cigar is less well aerated, and less air is able to pass through the filler leaves than when they are rolled or folded individually. However, from the point of view of the manufacturer, this method increases the roller’s output significantly.

Lieberman is the name given by cigar manufacturers to a fairly simple-to-operate piece of equipment that provides mechanical assistance to the bunching and rolling process. It is a steel frame with a rubber mat, which is integrated into the bonchero’s workstation. The binder and filler leaves are placed in a groove, which is formed under the rubber mat, and the bunch is rolled using a manually operated lever. Working on the same principle, the same machine can be used to roll a cigarette from a sheet of paper and cigarette tobacco. The Lieberman saves time and produces evenly rolled bunches every time. Opinions on the Lieberman are divided: does a cigar rolled in this way still count as a hand rolled cigar? Since most of the work is done by hand, cigars produced in this way are still regarded as premium cigars. In Cuba, a mat is also used to assist in the rolling process in the case of handmade Tripa Corta (short filler) cigars.

What must also be mentioned is gurado or hybrid bunching. Specially shaped cigars, like torpedos or perfectos, require a special rolling technique. The head of the cigar, which tends towards a point, requires a great deal of skill and care in the rolling. Even one incorrectly placed leaf can have a serious effect on the behaviour during the smoke.

No matter which method has been used to produce it, the bunch then spends some time in a mould placed in a press. An exception to this rule is the Dannemann Artist Line HBPR (hand bunched, pressed, rolled) for which the cigar roller completes every step by hand.

In his two factories, Rocky Patel produces both accordion-bunched cigars (in Honduras) and tubular-bunched cigars (in Nicaragua). One reason for the different methods is the difference in the fermentation of the tobacco. In Nicaragua he uses two binders. “One method is not necessarily better than the other. It’s just a difference of style. Depending on how cigars are made, they develop different taste profiles and characters. It’s a good opportunity to be a bit different, a little bit unique. It enables our lines to be very wide- ranging and dynamic. That’s the advantage of having two factories in two different countries.”

Shaken or stirred? How does Martini taste better? In fact, I find it not particularly important whether the filler is rolled or folded. My opinion on this is simple: the most important thing is that the cigar should draw well and taste good. 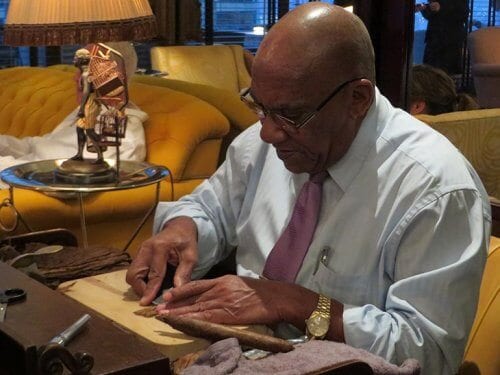