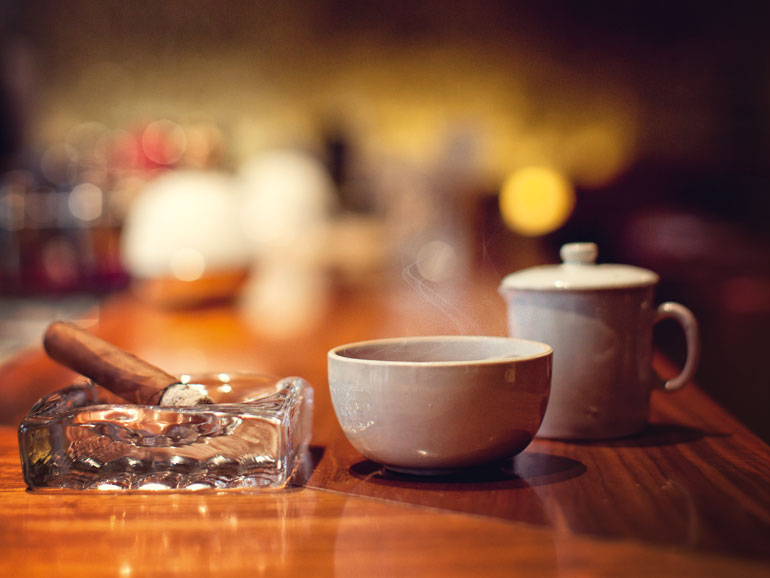 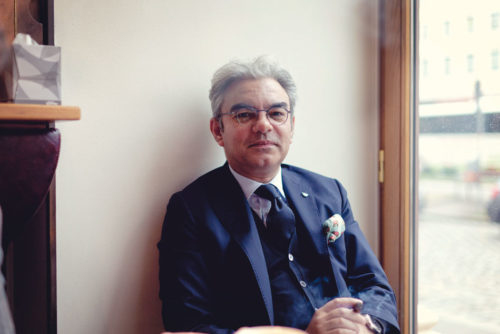 Expert Maresh P. Ramnani initiated the testers into the fine world of teas

The leaves are grown under shade, then harvested by hand. Only the best raw material goes on to fermentation, before it is carefully heated and enjoyed by connoisseurs around the globe. No, we’re not talking about cigars – this is tea we’re referring to! Our tasters awaited this pairing with particular anticipation. We wanted to know: how would some of the best-known teas in the world pair with those “other” leaves – rolled tobacco leaves? In a total of 24 combinations, our panel tasted three types of cigars alongside teas from India and China. Our venue was The Ritz-Carlton, Vienna. The selection was chosen in consultation with tea experts Eva Haas (Vienna) and Mahesh P. Ramnani (Tallinn), who also participated in the tasting. Their recommended teas were prepared at precisely the correct steeping times and temperatures for our eight tasters by bar manager Lukas Hochmuth. This tasting generally excluded flavored teas, as we were aiming to taste the pure flavor with each puro. The only exception was a blend that Swiss teahouse London Tea created especially to pair with the Davidoff 702 last year. Its Smoky Assam blend combines Indian Assam tea with a small measure of smoked Lapsang Souchong and a hint of vanilla.

We avoided introducing a pure Lapsang into the tasting, because we’d already established in prior pairings that smoky aromas in beverages don’t usually work well with cigars. Surprisingly, the smokiest tea we tasted behaved a little differently than expected: Smoky Assam increasingly won more fans from round to round, gaining an average of two points from the Frothy Monkey to the Maduro. In fact, the more intense the cigar, the better the tea performed. (The blend had originally been declared “Christmasy” because of its heavy spice notes.) “The cigar can keep up,” declared Cigar Journal’s editor in chief Reinhold C. Widmayer of the strongest aromatic combination. Like all eight tasters, he had a maximum of nine points to give away to each pairing. As always, the tasting featured three cigars representing the spectrum of intensity, from mild to full-bodied. Estonian specialty importer Mahesh P. Ramnani, who is also a sales representative for the Dominican brand Principle, had brought the cigars along with the tea in his suitcase. The tea ceremony opened with the mild Principle Forthy Monkey Signature, followed by the medium-bodied Principle Accomplice White Band Robuste, and concluded with the full-bodied Principle Accomplice Green Band Nightstick. Despite their similarities during the fermentation process, tobacco and tea leaves part ways when it comes to how they should be consumed. “The hotter the smoke, the more complex a cigar’s flavor, but tea loses its subtle notes when it is drunk too hot,” said Mahesh Ramnani. It’s the point where these two aroma curves intersect that makes a pairing really sing – and we captured it often enough. First off, we had done our due diligence by selecting teas that we know would likely be decent companions for our cigars. Among those in the know, Assam Black is known for its maltiness. By contrast, the Nilgiri, from India’s Blue Mountains, is more floral. The semi-fermented oolong, with its creamy-sweet biscuit notes, proved itself to be a lovely partner for the smokes.

WHISKY IN TEA-LEAF FORM
A particular delight was a new Assam tea that’s being marketed as a “single malt tea.” Indeed, British whisky expert Jason Turner commented that its malty notes and lightly bitter roasted chestnut flavor “remind me of Speyside malts.” There are also teas that are not necessarily good for pairing with a cigar, but excel as a palate refresher between smokes. The delicate Silver Needle was consciously sprinkled into the tasting to offer this cleansing effect. Offered as a pause between multiple draws, it refreshed tasters’ palates and prepared them for new taste impressions. In the social sciences one would refer to it as the “control group.” But enough about the individual teas and their cultivation areas (which we limited to China and India) – how nicely did they play with the cigars? It was clear that the Assam Black made the Frothy Monkey “more enticing,” as Jason Turner put it. For Reinhold Widmayer this pairing was “the perfect breakfast combination.” If we’re talking about the outstanding allaround companion for all three cigar types, the Assam Black was the winner. Practically neck and neck with the Nilgiri Black, it edged ahead ever so slightly. Both found themselves in the top three accompaniments to all three cigar types. When the Nilgiri was determined the best pairing with the medium-bodied Accomplice White Band Robuste, it achieved an average score of 7.2 points (out of nine possible) per tester and the highest score of 58 (out of a possible 72) points. It was closely followed by the combination of the full-bodied Principle Accomplice Green Band Nightstick and the Assam Black at 57 points. “The tea bolsters the cigar,” said Cigar Journal editor in chief Katja Gnann, agreeing with tea specialist Mahesh P. Ramnani, for whom “the cigar highlights the tea’s characteristics.” Pure harmony! 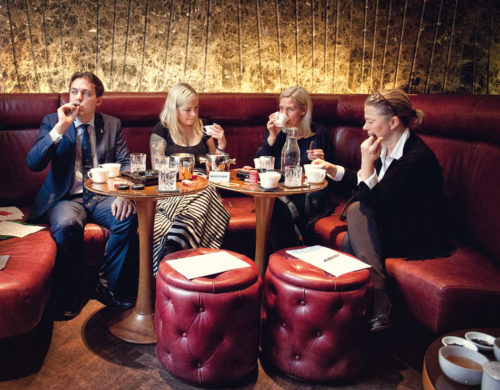 Critical looks from the international jury in the D-Bar: Does the tea really go with the entire smoking process of a cigar, or is it “just” a cleansing sip for the palate?

DELICATE CHALLENGES
How successful the tea pairings were depended on the magnitude of the cigar’s flavor, and this was demonstrated by the most subtle tea in the tasting, the White Needle. This white tea comes from the same plant as green and black tea (Camellia sinensis), but is made from leaves at a different stage of ripeness. Its still-closed leaf buds are covered in a white down that gives the tea its name. Like the volados in tobacco, the lightest, lowest leaves of the plant, these “white needles” have a subtle taste. White teas also have the lowest caffeine content. Accordingly, this Assam White Needle commands a high price because of its scarcity and because many more of its small leaves are required to produce a kilo of finished tea. Mahesh Ramnani demonstrated a further benefit of tea for cigar smokers. “The palate is cleansed between flights and readied again to interpret the cigar’s aromas.” This makes White Needle less an accompaniment to cigars and more a drink for between smokes. Unfortunately, it’s delicate aromas could only hold their own with the mildest cigar. Similar in name (White Needle is also known in China as White Monkey) and mildness, this combination was harmonious in its subtlety. “This is for ladies who don’t smoke cigars very often,” commented bartender Isabella Lombardo. But outside of this pairing the white tea couldn’t compete; even with the Robusto “only the cigar could be tasted,” said taster Katharina Kreft. And with the fullest-flavored cigar in the test, the Principle Accomplice Green Band Nightstick, “the tea was completely drowned out” (Irene Rittler).

THE BASICS OF TEA SELECTION 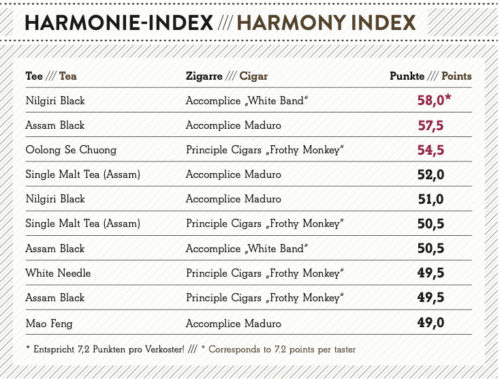 But “like and like” were not always essential for a balanced combination. For example, the Oolong Se Chuong gave the light Frothy Monkey a flavor boost. The Chinese tea noticeably enhanced what the more experienced cigar smokers on the panel perceived as the cigar’s weak roasty aromas. This pairing yielded the third-highest score, demonstrating that the sum was greater than the two parts. Our tasting at the Ritz-Carlton also led to another conclusion: it is often better to downplay the cigar aromas. Intense individual flavors, like the Smoky Assam, only worked for the tasters with a fuller-strength format (Principle Accomplice Green Band Nightstick). By contrast, the subtle “palate cleanser” Silver Needle only scored well with the mild Frothy Monkey. But the Single Malt Tea, with its whisky aroma profile, performed very well with the cigars, making it into the top three twice. The two oolongs also offered a thoroughly acceptable compromise with their creamy mouthfeel, which went along nicely with all three cigars. However, the light tannins found in the Assam teas made double winners Nilgiri and Assam Black the most harmonious pairing partners. Avoiding over-steeping – even the black teas steeped no longer than three minutes – highlights the balance between tea and cigar. In these pairings, the cooling tea aromas swirled toward the warm, smoky cigar flavors. The end result was not a collision, but rather a true flavor explosion. All you need is a teapot next to your ashtray to experience this delightful union again and again. 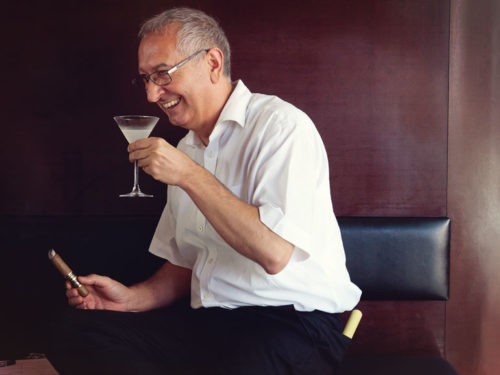 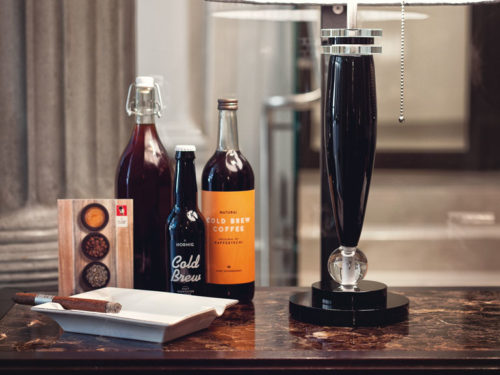 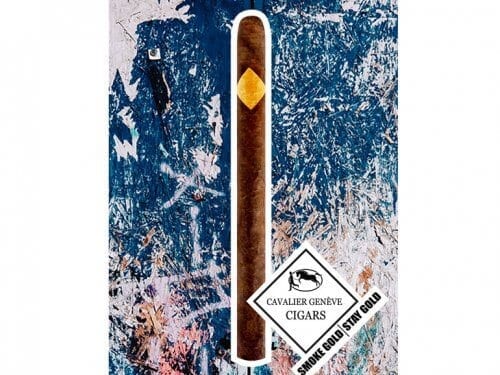 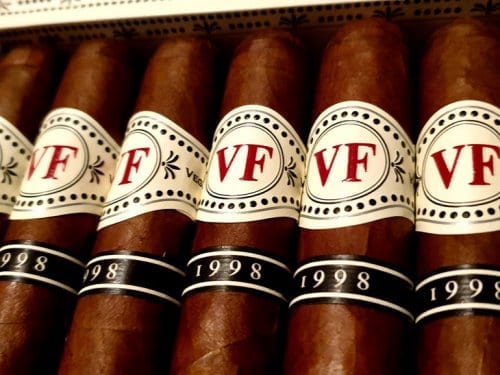