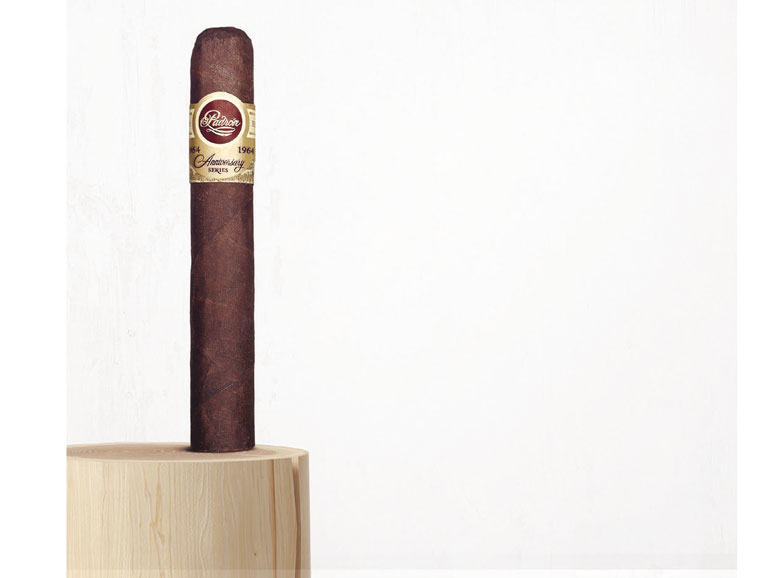 Every year, Cigar Journal crowns its top 25 cigars of the previous year, and with it also the other trade magazines that have long been dedicated to the enjoyment of a cigar. One brand is always represented in the top positions on all lists. This is not only a very well-known brand, but also always one of the lines of the venerable house that has existed for years or decades. We are of course talking about Padrón – in this case the Padrón 1964 series. For many, these cigars are the cigars from Nicaragua; for many, the brand is now simply cult; and for many others, Padrón stands for a family that has now become a myth.

Welcome to the Cigar Journal smoking salon! I am delighted that you have found your way here again. Today we want to taste a special cigar together – the Padrón 1964 Principe Maduro. I have smoked many a cigar from the house of Padrón. This one found its way to me through a good friend. I had simply continued to overlook this cigar.

With a straight cut and lit with a jet flame lighter, there is no longer anything standing in the way of enjoyment. As an accompanying drink, I opted for a somewhat acidic espresso made from Kenyan beans. Already at the first puffs, the Nicaraguan spiciness is clearly presented. But in contrast to the familiar pepper or chili notes, in the case of the 1964 Maduro Principe it is rather a spice bouquet of a very special kind. In fact, a slightly oriental note also tickles the taste buds. With its fruitiness, the espresso favorably underlines this. Right from the start, the spice is joined by clear hints of roasted cocoa and chocolate. A little earth accompanies the extremely promising start. The small format is particularly suitable for an extended lunch break or a relaxed smoke in the afternoon, when you don’t have quite so much time for prolonged indulgence. Smoked slowly, however, the cigar offers enough enjoyment for 35 to 45 minutes. Take a short break halfway through the first third and put the cigar aside. This short break gives it and you the opportunity to take a deep breath. A nutty, slightly earthy taste remains in the mouth.

Enjoyed further after the break, the chocolate notes of the Maduro wrapper unfold in full force, and at the end of the first third, it is these notes that set the pace and determine the aroma. You will notice that the small format is a surprisingly cool smoke, which favors the taste particularly well.

Smoked retronasally, discreet herbal aromas with a slight grassiness also unfold. Especially amazing is the excellent balance of flavors. The blend is almost perfectly composed. For many, the Padrón brand stands for absolute perfection, and I am inclined to agree with this. Alone the way it is crafted is exemplary, a class of its own. The burn proves to be perfect. The black edge at the burn end is razor sharp, only a small band separates the cigar from the greyish white ash, which – although it is a box-pressed small format – stays on the cigar for a very long time. During the first third, you probably won’t have to ash the cigar at all.

At the beginning of the second third, the chocolate flavor clearly changes to dark chocolate, but there is almost no sharpness on the palate, the spiciness from the beginning now rather swings over into a light roasted aroma. The earthy tones increase. Let’s give the good stuff a little break again. If you have also decided to pair it with coffee, now is a good time for a hearty sip. My “fruit bomb” from Kenya provides a delightful contrast to this chocolatey beauty from Padrón.

Particularly interesting is the harmonious sweetness that is clearly noticeable towards the end of the second third. Retronasally, the taste of freshly baked bread reveals itself to the sweetness. This is the beginning of an interesting play of aromas that I have encountered in several tastings of the Padrón 1964 Maduro Principe. In the last third, the sweetness increases significantly, but a little pepper and a hint of marzipan or bitter almond join the flavors that tickle the tip of the tongue. A little leather is also noticeable on the palate. The last puffs reveal significant potency once again and an absolute pleasure for passionados. It is the last moments of this little cigar that make the enjoyment of this beauty something incomparable. Here you can see the generations of experience that make such a work of art a reality. It is not easy to fit so much flavor into such a small cigar; every moment I was allowed to spend in the company of this cigar was enriched by it. I hope you can have the same experience. The Padrón 1964 Maduro Principe proves that there are no expensive cigars. There are only those that are definitely worth their price.