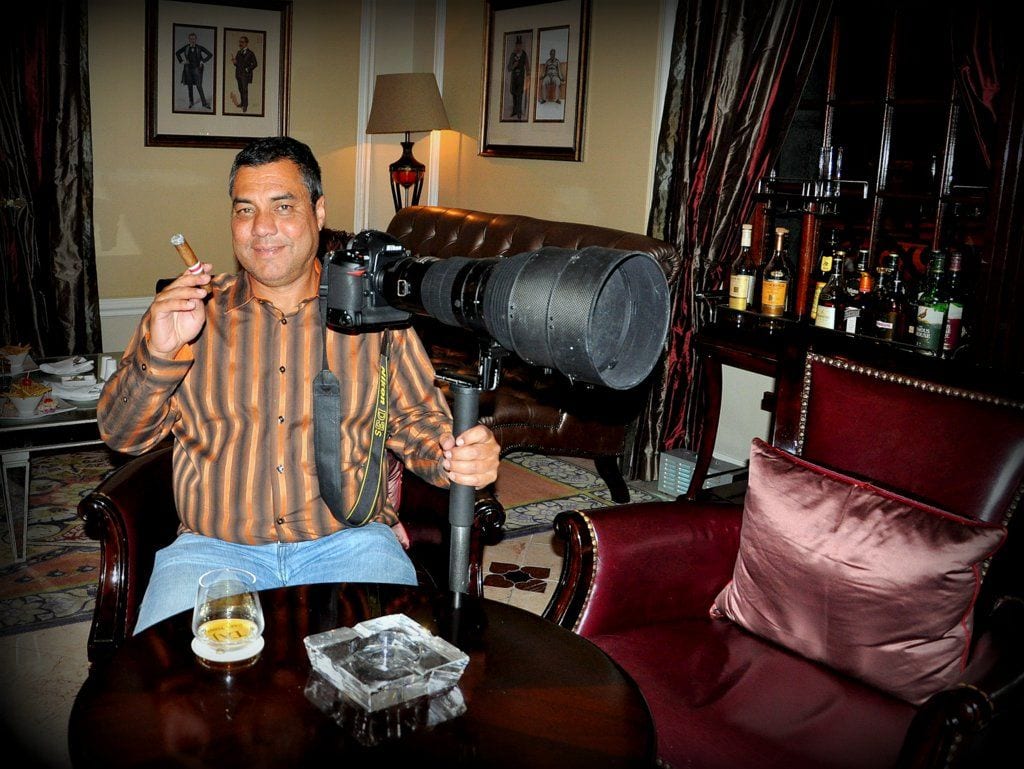 We meet in the elegant Taj Hotel cigar lounge in Cape Town. In a good mood, Peter Heeger is coming from the Two Oceans marathon, a popular mega event on Table Mountain. The photographer lights his Montecristo No. 5 and is delighted with the spectacular images that he has captured with his lens once again in his hometown. “Such a multiculturally mixed group of marathon-runners as there is here on the southern tip of Africa – that’s just as unique as our marathon circuit from the Atlantic to the Pacific,” he says.

Carefully, Heeger puts down next to him on the couch his Nikon with its impressively long telephoto lens. “Here on the Cape, we don’t care much for elitist labels. That also goes for the politicians in parliament just opposite who smoke cigars here. If, after meetings, I turn up in jeans and open up my laptop, nobody bats an eyelid,” says Heeger. “My favorites from Cuba and Nicaragua – I like Robustos – are perfectly stored in a humidor here. I also get my favorite whisky, a 12-year-old Yamazaki single malt whisky from Japan.”

At the 2010 FIFA World Cup opening event, I shot photos right at the forefront for international agencies like AFP, Gallo and Getty Images

Heeger then shows me his action shots from the cricket matches that he organizes in South Africa and Australia, and photos of the 1.94-meter-tall giant Pierre Spies from Pretoria. “To us, he’s the Superman of the Springboks, our leading rugby team.” Full of enthusiasm, the photographer talks about the 2010 FIFA World Cup in South Africa. “At the opening event, I shot photos right at the forefront for international agencies like AFP, Gallo and Getty Images. I had my improvised office in the Bascule Bar cigar lounge. I sat there until the early hours of the morning, sending photos. While doing it, I smoked more Partagás D4s than I ever have in my life.”

In order to fulfill his dream as freelance photographer, the sport enthusiast Heeger had to prove above-average performance in his main occupation as financial advisor. “Today I’m flexible,” he says, “I can keep competitive appointments free during the week,” emphasizes the BMW driver, who is at a different stadium every weekend.

“Twenty years ago, I had a touching encounter with Nelson Mandela,” the fifty-five-year old also confides in me. “That was in 1994, in South Africa’s keyyear, when apartheid was finally politically conquered and we wanted to create a rainbow nation … free of racial discrimination,” stresses Heeger. “During this time, I organized an away game for British football teams that had their summer training camp in Cape Town.

I took advantage of the situation and invited Nelson Mandela as guest of honor,” Heeger explains, moved. “He really came! I took a photo of him and footballers from Great Britain, our one-time colonial power, that made history – sort of as Mandela’s spontaneous warm gesture to the world that he, as a black president, could also extend the hand of peace to white athletes.”