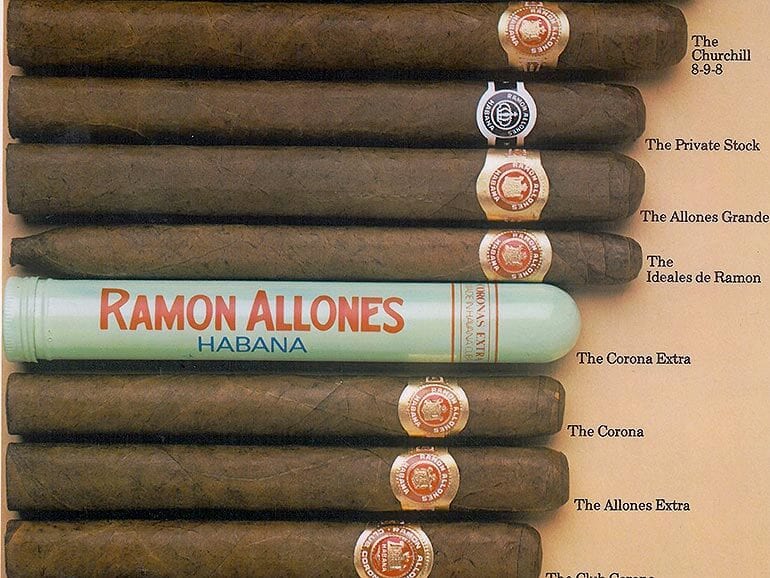 One of the saddest stories of my time in the Havana cigar trade has been the steady, sometimes precipitous, decline of Ramón Allones.

It matters to me for two reasons. One is that, between 1911 and 1927, the brand was owned by Hunters, the British cigar importer that is now part of today’s UK Habanos distributor, Hunters & Frankau, where I spent most of my career. As a result I feel an almost proprietorial responsibility for it. And the other is because, for many years, my standard response to requests for the name of my favourite cigar has been the Ramón Allones Specially Selected.

In its heyday under Hunters’ ownership, Ramón Allones was a gigantic brand. The company’s 1924 catalogue lists a total of sixty-two different sizes to choose from. A range on this scale continued after the brand was sold in 1927 to Cifuentes, Pego y Cía, which owned the Partagás factory, right up until the outbreak of the Second World War. Wartime currency restrictions prohibited the importation of Havana cigars to Britain completely until 1952 and even then the quantities were limited. Hunters’ 1957 catalogue listed a modest ten sizes in seventeen references for Ramón Allones. Nevertheless, it was a big brand in the UK, with sales far outstripping the company’s other major player, Montecristo. 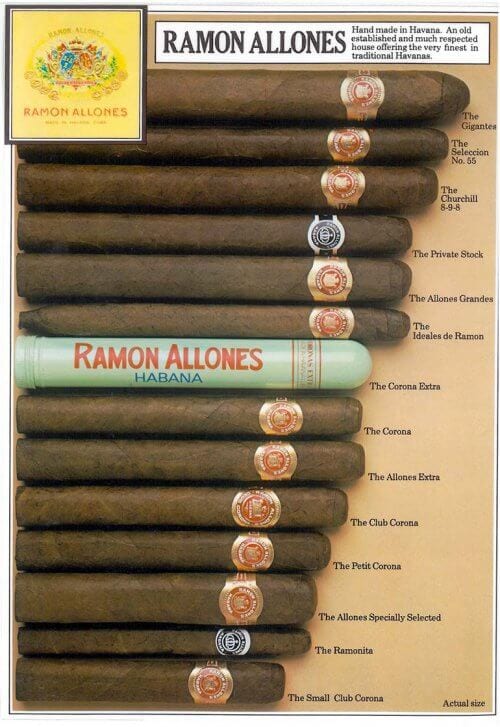 After the Cuban revolution in 1959, things stayed much as they were for the subsequent decade. One notable addition to the Ramón Allones range was a unique form of packaging for its Coronas, the 8-9-8 cabinet selection, with its contents of 25 cigars arranged with eight on the top row, nine in the middle row and eight on the bottom row. In fact, this innovation was first introduced in 1958, just before the revolution at the request of Hunters. 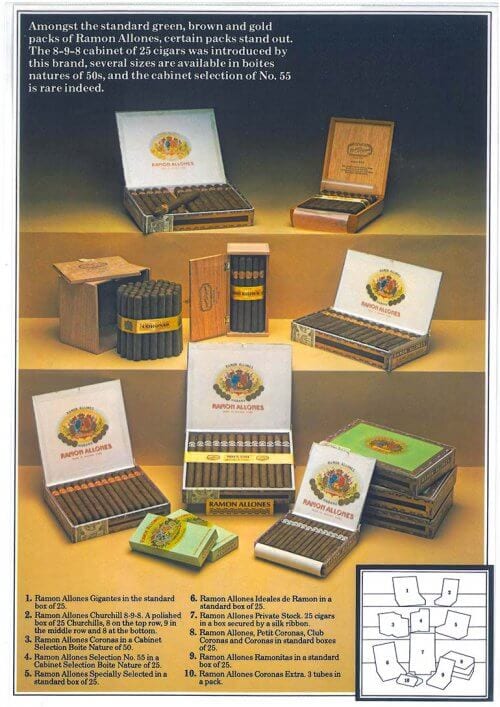 The 1970s heralded a period of change; at first positive and then negative. In 1972 there was a rationalisation of sizes between Ramón Allones and Partagás, which saw the Magnum and the old Specially Selected disappear, but the addition of the 109-sized Gigantes, the Dalia-sized 8-9-8 (called the Churchill 8-9-8 in England), a thin Ninfas known as the Selección No. 55, a Franciscano called the Allones Extra and a tiny Panetela named the Ramonita. The Specially Selected returned as a 50 x 4 7⁄8 in/124mm Robusto size in 1975. At this point things looked good for Ramón Allones. However, there were forces at work that were set to undermine it. First, it was a brand, the sales of which were focused on just two markets: the UK and Switzerland. Partagás, on the other hand, was more widely known around the world. Then there were the rising fortunes of other Cuban brands, particularly Montecristo.

A surprising fact that I unearthed shortly after my arrival at Hunters was that Ramón Allones’s UK turnover in 1970 had been three times higher than Montecristo’s. But, by 1980, that position had been reversed and Montecristo’s sales had become three times higher than Ramón Allones’s. What caused such a dramatic shift I have never fully understood, but fashions change, I suppose.

It was lucky that, in 1978, I photographed the whole Ramón Allones range as it then was. Because that same year, Cubatabaco started a process of rationalisation. The 109-sized Gigantes became a standard Prominentes, or Double Corona, and the Private Stock, Ideales de Ramón, Allones Grandes and Selección No. 55 disappeared completely. Over the next two decades, many more sizes fell by the wayside, until the early 21st century, when just three standard sizes remained – the Gigantes, the Specially Selected and the Small Club Corona.

As a final indignity, when Habanos S.A. rated all its 27 brands by order of importance, Ramón Allones was placed in the lowest category as a ‘local brand.’ On the face of it, you could argue that the time has come to close the door on the history of this venerable brand. But one factor suggests a different course of action.

Since 2005, Habanos S.A. has permitted its distributors to request special sizes in less well-known brands to sell exclusively in their markets as Regional Editions. It is staggering that over 150 of these specialities were produced up until 2015. But it is equally remarkable that the brand chosen most often, accounting for one in every five Regional Editions, is – you guessed it – Ramón Allones. With such a vote of confidence from Habanos S.A.’s distributors in all corners of the world, surely it’s time to give Ramón Allones a lift. And there are plenty of sizes from the past that I, for one, would enjoy smoking again.

This article was first published in the 3/2016 edition of Cigar Journal. 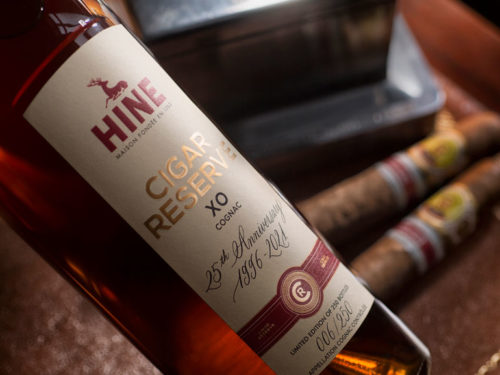 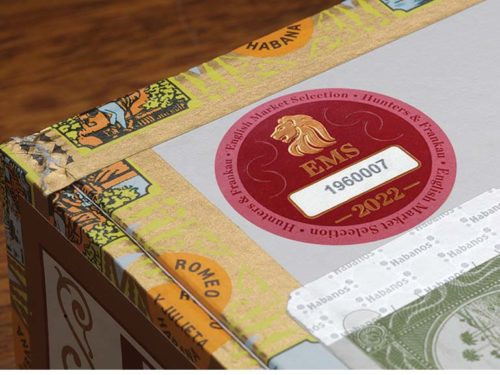 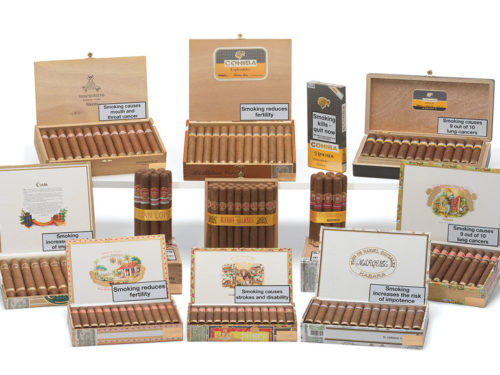 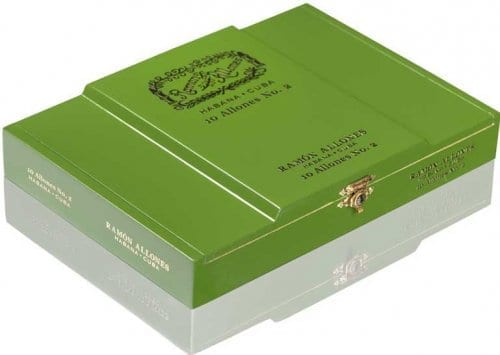