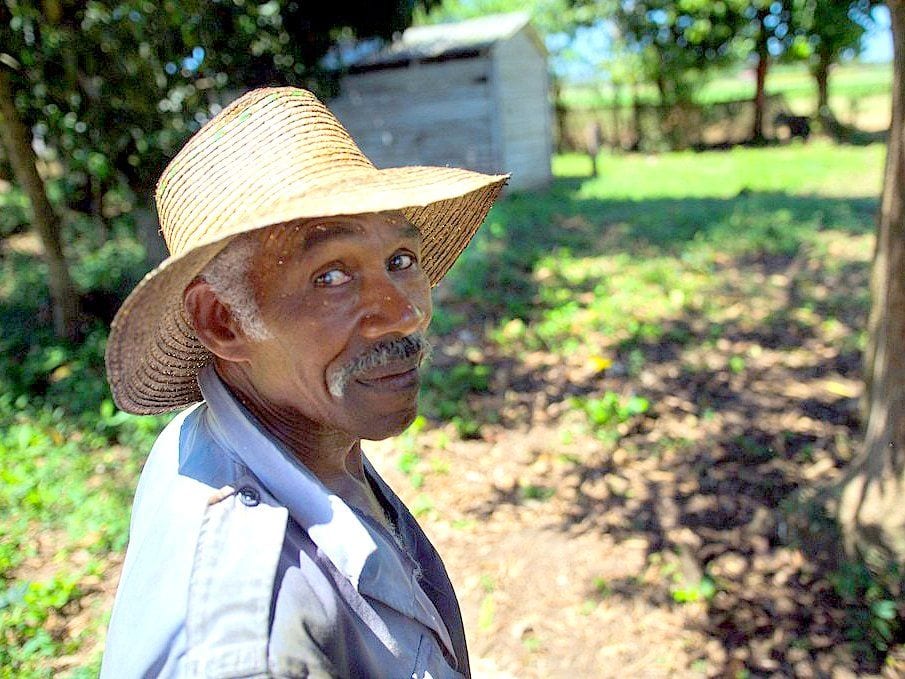 A free market is not Estanislao Sanchez Acosta’s cup of tea. After 63 years working the tobacco fields of west Cuba he’s simply content not to have to sell his product to different clients.

Estanislao is one of the farmers in a local tobacco growing cooperative in San Juan y Martínez, 20 minutes outside of Pinar del Río in the western part of Cuba. When I try to meet him at his house, there’s absolutely no sign of him. According to his wife, Zenaida Hernandez Prieto, he’s somewhere out in the tobacco fields behind the curing barn, but the plants are tall – taller than some Cubans. “He went back there to collect leaves,” she says, returning from the couple’s house across the grass path to the barn.

The afternoon sun is scorching as I walk down the path that divides the two main tobacco fields. I go to the end, where Estanislao’s horse is tied up to the fence that borders the neighboring tobacco field. When I look back I suddenly see some of the tobacco flowers twitching and jerking.

The red and gravelly soil here is very good for tobacco

There’s still no sign of Estanislao but I sense his presence. As I move closer to the moving rows of tobacco plants I notice more and more activity among the plants. I see his dirty white hat before I see him and his four or five rather short-statured colleagues in sweaty and equally dirty clothes. They’re all wearing different types of protective headwear, systematically collecting tobacco leaves, row by row.

“We normally plant the seeds in November and harvest in March, but sometimes you have to adapt, and both plant and harvest later,” he tells me without raising his eyes from the plants. “The red and gravelly soil here is very good for tobacco. The pH-level is good. If it’s not, you add calcium carbonate to reduce the acidity.”

Estanislao is one of almost 70 farmers who are part of the same cooperative. They are all responsible for their “own” fields, which are located in and around the same area as Estanislao’s. As is customary in this country, however, they don’t own the land themselves. “The state of Cuba leases the land to the head of the cooperative,” he explains. “We, the head farmers, are responsible for our own cultivation and workers.” The fields across from the fence are run as a CPA (Agricultural Production Cooperative), but Estanislao prefers the way in which his kind of cooperative is run.

“They are farmers who work collectively just like us, but there is a difference. After they’ve finished harvesting they sell their tobacco and share the money equally. I pay some people to work for me. What’s left over after I’ve sold the tobacco and paid [my workers] I keep for myself. So, at the end of the week I count up the harvest to see what’s been produced. Then the cooperative lends me money so I can pay my employees accordingly. The rest is for me.”

I pay some people to work for me

The tobacco is sold to the state-owned Cubatabaco, which, in turn, distrib utes it to various cigar manufacturers. Many would argue that a free market is preferable, but this Cuban farmer likes to keep it simple. “I like that you know who’s going to buy your product and that you don’t have to try to sell it in different places. It’s comfortable.”

Born into the Tobacco Life

We walk back towards his humble house, where he keeps some of his many animals – chickens, dogs, and apparently, according to him, quite the mischievous pig. He really wants me to see it, so he calls for it with a strange duck-like call, but the pig is yet to be spotted. “Maybe he’ll come out later,” Estanislao says, giving up the search. 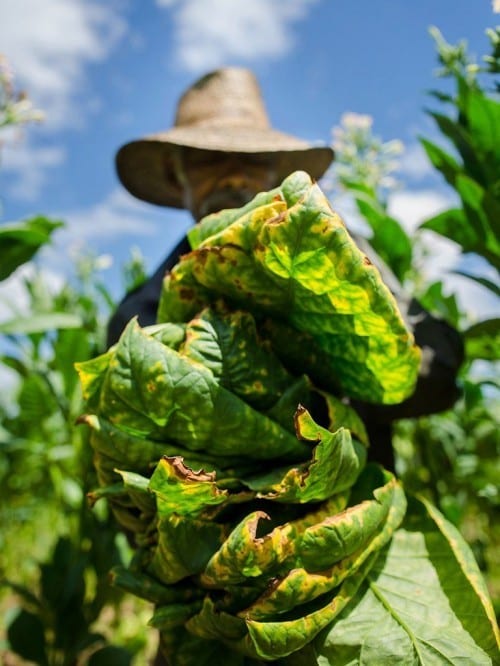 Really no rush, I think to myself. Estanislao has been working with tobacco for 63 out of his 70 years and knows the drill. In fact, it’s quite safe to say he knows his business very well. “I was more or less born into this,” he explains. “We were six siblings who all learned the profession from our dad. I started by cleaning and removing the buds from the plants and collecting the leaves, and I’ve always enjoyed doing it.”

He used to work at different plantations, but 20 years ago Estanislao began focusing on cultivation outside his own house, and that’s where he’s been ever since. His children have not, however, followed in his footsteps. “I have two kids. One works as a nurse in Venezuela and the other is a teacher on Isla de la Juventud, an island off the south coast of Cuba.

They both studied, and chose different careers, but I also have a stepson who doesn’t work here but sometimes comes to help me.” About 50 meters away from his gate, behind a line of trees and next to one of the tobacco fields, four oxen are tied up in the shade. Some of them are lying around, quite uninterested in my presence, while others, more suspiciously, are trying to keep whatever distance is possible whilst being chained to the ground. “These are good, sturdy animals, aren’t they?” says Estanislao.

Harvesting all Year Round

Every day he gets up at 5.30 am, and, during tobacco season, each day is more or less identical. Tobacco is his main crop, but Estanislao cultivates other things, too, as well as keeping animals.

“I get up, milk the cows and move the oxen before I join in on whatever has to be done with the tobacco. If I’m not working with tobacco I’m planting yuca, beans or rice. Next day, same battle, and that’s the life I live. On Sundays we focus more on the tobacco, since it’s picked up on Mondays, so we have to prepare it and make sure it’s dry.”

When the season ends, normally in late March, Estanislao’s working day changes. “When one season ends another begins, so after the tobacco, it’s time to harvest the rice, for example. This year, the harvest will be late because we had some problems with the water.

A lot of the seedbeds were destroyed and they have to re-sprout. Then, in June, after the rice is harvested, we have to turn our attention to the tobacco again and de-vein it.”

I ask him if they let the tobacco fields rest at all. “Yes,” he tells me. “The only thing we grow there is corn, because it doesn’t affect the land. 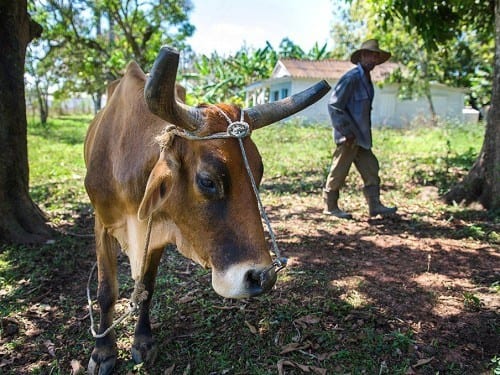 We also let our animals graze there since their manure and urine fertilize the earth.” Back at the house, the pig suddenly appears between the residential house and a kind of storage unit that looks a lot like the house.

The animal is clearly skeptical about my presence, and keeps its distance until I approach. It darts off through a big hole in a fence. Estanislao strolls after the pig, catching up to feed it. He looks as proud of his pig as he is of his oxen, a wide smile detectable underneath his dirty, sun-bleached hat. At both ends of the garden are banana-plant groves in which chickens are scurrying around, sporadically in sync with the pig.

I notice a crooked ladder leaning against one of the two almond trees on the premises. “It’s for the hens,” Zenaida explains. “They climb up it at night and sleep in the tree.” Right next to it is the chicken coop, which now seems somewhat superfluous. All in all, Estanislao seems to live a happy, relaxed life with his wife.

“I don’t have too much to worry about,” he says. “The biggest worry would be your children being sick, but they turned out healthy and nice, and they weren’t unruly or anything, so I’m happy about that.”

In the kitchen, three colorful Eighties-style thermoses are lined up on the sink next to two empty HavanaClubbottles,makingmewonderwhat combination of drinks this senior couple consumes during their work day. Facing the TV in the living room area are two rocking chairs,as seems mandatory in Latin America. The elderly couple sits down in them after their day at work. “You should change your shirt, it’s all dirty,” Zenaida says to her husband when I want to take picture of them. “At least put on a clean hat.”

Estanislao waves her off with a loving smile as she fetches the hat against his will. “I’m a tobacco worker. That’s what happens. I get dirty.”