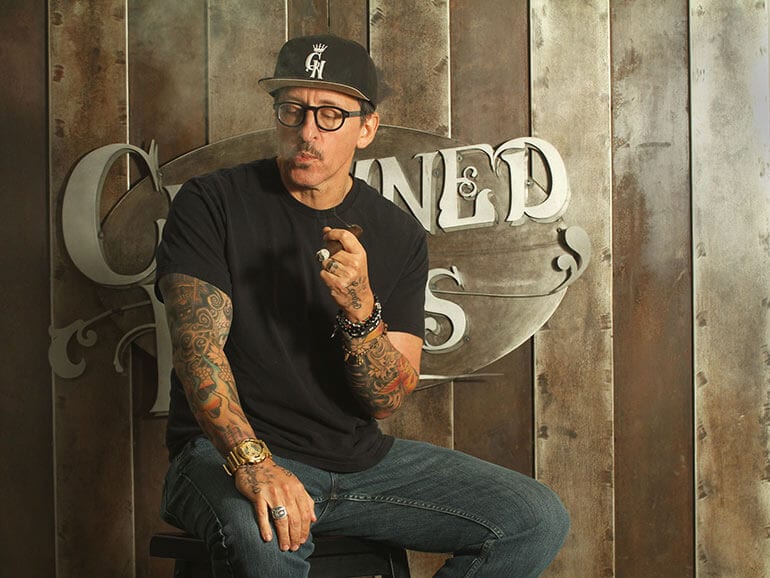 It all probably started when Jonathan Drew at Drew Estate hired Jessi Flores as his right-hand man in 1998. Flores began as a driver, translator, and whatever was needed, and Drew soon saw the potential of the graffiti artist and former tattooist from Miami. That was the beginning of the urban profile that has helped make this cigar company one of the biggest in the world. “[Jonathan] saw me doodling one day and asked me if he could put the drawing on a t-shirt,” Flores says. “I was surprised, but said ok. Then he asked me to do more stuff . So I came up with the logo picturing Manhattan Bridge.”One day Jessi got a visit from an unknown graffiti artist form Managua. “He rang my doorbell. He wanted to do a piece together, so we did one in the center of town.” Later, Jonathan called Jessi to ask him to find the person who had done the piece. “I told him it was me. So he asked me to do his factory.” A few years prior to this, in 1993, Pete Johnson of Tatuaje Cigars had started working in the business on the retail side. Being inked, he immediately got some stares. When he started his own brand a decade later, people still didn’t know what to make of him. “They looked at me funny,” Johnson says. “Nobody had tattoos at trade shows at that time, so people didn’t think I was the owner of a brand. It took a while for me to get recognized, but I don’t think it had to do with the name Tatuaje. I think most people didn’t even know that it meant ‘tattoo’ in Spanish. Except for the name, there’s nothing in the design that connects it to tattoos. It was just hard to pronounce.” The name derives from the nickname Johnson was given, Tattoo Pete, when he first got into the business. And, unlike most people, he had already seen a different side of the cigar smoking world. “I was a musician, so I knew a lot of writers and other musicians who smoked cigars. But I’m from Los Angeles and maybe it’s a more eclectic city. Generally speaking [cigar smoking] probably wasn’t very public.” At the ICPCR in Cincinnati in 1996, Johnson met another now well-known and inked actor in the [cigar] market, Jon Huber of Crowned Heads cigars. His career in cigars had started earlier that year, when he got a job at CAO in Nashville.“I celebrated by getting my first visible tattoo, an original Cohiba band,” Huber recalls. His experience was slightly different from Johnson’s when he started his own brand in 2011. He had actually also been part of introducing tattoo art to cigar smokers. Huber was already known because he represented CAO. In 2006, he did the Rock ‘n’ Rolled tour. “In every city where we had an event we invited a local tattoo artist to create a CAO-related artwork on canvas,” he explains. “Because tattooists work on skin, not all people understand that they actually are artists. This was my way of demonstrating what they can do. At the end of the event we auctioned off the painting. Cigar Press even did a big piece on it. Looking back, it was all probably a little bit ahead of its time.” 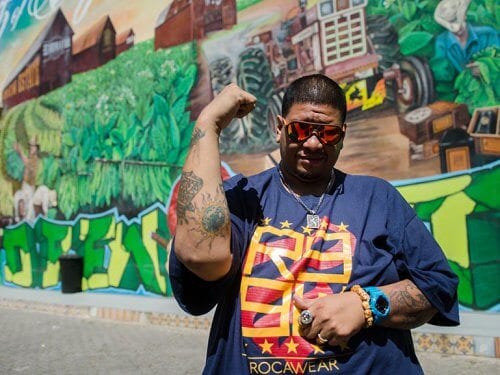 So, back to Drew Estate: After Flores had done the Drew Estate factory, he started producing bigger and bigger art pieces. First for the factory and later for trade shows all over the world, all in the same kind of street-art style mixed with Latin elements. “[Jonathon] asked me to do all the spaces, as well as the front of the factory, which made it into a landmark,” Jessi says. “People used to pass it and take pictures all the time. For the trade shows we did different things. One time I sent 6,000 hand-painted pairs of shoes; another time I sent seven containers of art. It had never been done before, but Jonathan wanted people to be excited about going to trade shows.” Little did the pair know that this would change the whole cigar business. Or did they? Jessi recalls: “We were in Managua the other day and I asked [Jonathon] if he remembered saying that we would revolutionize the business. He said: ‘Yeah, you’re right. I did say that!’ That’s pretty cool.” At that time, Drew had decided to go all in. He had more or less given Flores his credit card to “build an empire,” as Flores puts it. He is now the general manager of the art design and marketing department. Under the name Subculture Studios, he and his associates create art for all aspects of the Drew Estate enterprise. “ That’s one thing that I really enjoy, the versatility of what we do here. Usually artists get famous after they’re dead. I’m still alive and get to see the fruits of my work. Other tattooists are now doing my designs, and there was even a guy who got my signature tattooed on his arm. What a psycho!” About two years ago, the craze really took off, when a persistent cigar safari visitor convinced Flores to start tattooing again. “I had taken up tattooing after moving to Nicaragua, and, in 2003, I opened up the first professional tattoo studio in the country, but I quit after a while. Then, one day at a cigar safari, this guy said he wouldn’t leave without a tattoo. I finally borrowed my assistant’s equipment and did a MUWAT [My Uzi Weighs A Ton] gas mask and my signature on him. After that, everything just escalated.” He started doing the Dirty Rat, Navy Girl, Fireman, Bounty Hunter, the Flying Pig and many other Drew Estate designs in different variations. Not only as tattoos, but on everything from cigar boxes and humidors to t-shirts, shoes, and even construction helmets and jewelry. “I’ve done about 45 to 50 Drew Estate tattoos now and it’s become a thing where people bring stuff to the safari they want something printed on. One guy wanted Dirty Rat as a golfer, both as a tattoo and on a t-shirt.” 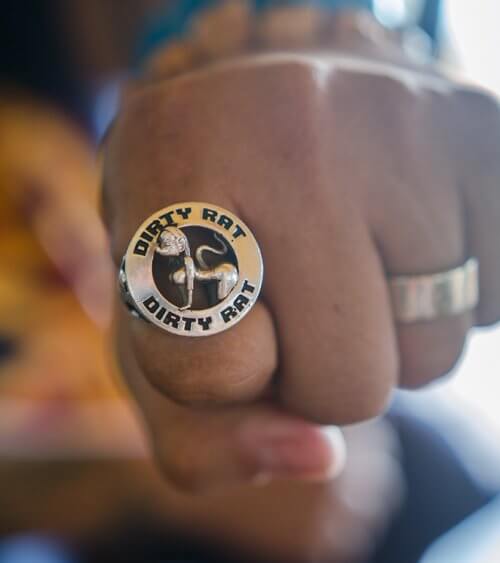 This brings us up to speed, and the question is: what has this done to the cigar world? Did they change the game? “We get a lot of hardcore fans,” says Flores. “And the majority of our followers are people who like this sort of style, are of every age and with or without tattoos. A bunch of people I didn’t know enjoyed our cigars came out of nowhere wanting artwork in reference to Dirty Rat.” One of their followers is Rodney Chappell from Louisiana. “Jessi is one of the deciding factors of this trend,” he says. “He brought in the urban style, but he also mixes in a lot of different stuff, and that’s what makes it great. I think Drew Estate appeals to people who aren’t against the tradition, but sick of it never changing.” Flores comments, “It’s all been building up to this, but it’s interesting how one persistent guy made such a big change. Then Pete became successful with Tatuaje as well.” When they first started, Flores didn’t know what they were doing. He asked Jonathan why he wanted urban art. “But now I’ve heard about people getting into smoking through loving the art. That’s a pretty cool testimonial,” Jessi concludes. “In gathering a younger audience, Drew Estate has been very helpful, but tattoos, in general, are also more accepted today, and cigar smokers are just normal people,” Johnson says. “Some of the younger ones often have more tattoos than the older ones, but that’s it.” “ There’s been a demographic change,” Huber says. “It’s a younger clientele, with younger values and trends. I mean, Dennis Rodman used to be the only fully tattooed athlete, but now even high school basketball players have full sleeves. And you can’t ignore the influence that Drew Estate has had. Jonathan created something unique and today he has his following. It’s become a cult of personality and he was a much needed shot in the arm. It’s hard to put your fingerprint on an industry with such strong traditions, but he’s succeeded. It’s become about more than just cigars. It’s become a lifestyle.” 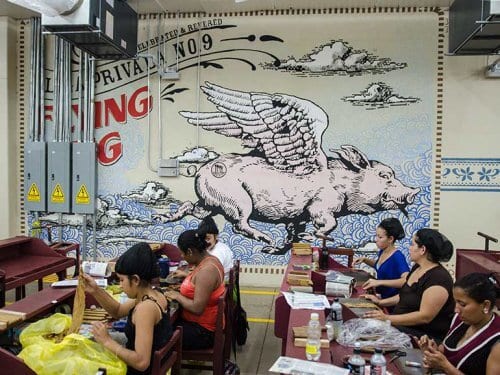 Yet not without opposition. “In the beginning, upper management didn’t like the idea with images of females with big racks and everything,” Flores says. At first he thought he was going to lose his job because of the conservatives. “But the guys at Swisher [which purchased Drew Estate last year] love it. They told us not to change anything. And you know what? The ladies also get Dirty Rat tattoos.” So, do most people still think that a cigar smoker is a middle-aged man who has a high income? Honestly, probably yes, but one thing is clear. The number of people who also associate cigars with tattooed people, street art and, in extension, just about everyone, regardless of age, gender, creed and color, has definitely increased. Especially among cigar smokers. “We see the culture expand and move away from that high-class, conservative stereotype, and what we’ve done has been a big part of that change,” Flores says. “To be honest, I think the whole cigar business has become a rebel business,” Pete Johnson adds. “We’re all under constant fire from government agencies, and, in the end, it doesn’t matter if you have a face tattoo, a thousand piercings or are a nudist. It’s a lifestyle choice, a way to relax. You can be the richest guy in the world or the poorest. We’re all just cigar smokers who want those 30 to 45 minutes to get away.” This article was published in the Cigar Journal Autumn Edition 2016. Read more