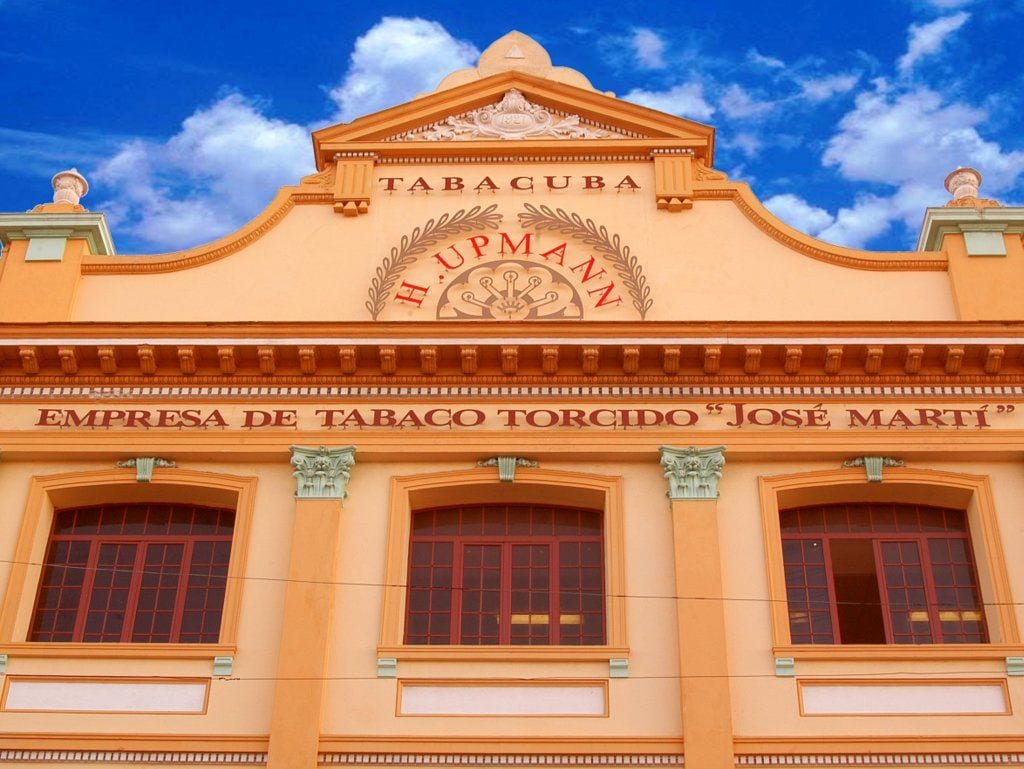 Today, most people know the factory as the H. Upmann manufacture. And indeed, in 2004, the brand was officially relocated here from its Calle Amistad location. However, sometime during 2011, cigar production suddenly and unexpectedly ceased, and the building has remained empty ever since. H. Upmann wasn’t by any means the first cigar brand to have been housed here. In fact, the building’s history is intriguing and mysterious.

Unlike many older manufactures, the José Martí factory is located in one of Havana’s newer neighborhoods, Vedado. The simplest route to the manufacture begins at the legendary Hotel Nacional.

Standing on the Malecón with the ocean at your back and the hotel in sight, Calle Rampa, which turns into Calle 23, will be on your left. In Havana’s newer neighborhoods, the streets bear numbers, not names. These numbers are posted on cornerstones at each intersection, and are usually easily visible.

The manufacture is located on Calle 23, between 14th and 16th streets. According to the gable inscription, the building was likely built in 1927. It is believed that the facility has always been used as a factory; we know for sure that cigars and/or cigarettes were produced here under the Particulares and Byron labels.

However, we know very little about these brands, their histories and their owners; it’s also possible that only their cigarettes were created here.

Birthplace of the Montecristo

Alonso Menéndez and José Garcia, founders of the Montecristo brand, acquired Byron and Particulares in the early 1930s; they registered Montecristo in 1935. That’s how we know for certain that the very first Montecristo cigars were produced in this factory.

Further evidence: a Montecristo vista from 1936 that features the address Calle 23 y 16. In 1937, Menéndez and Garcia acquired a license to produce the H. Upmann brand from British firm Frankau S.A.

Subsequently, both H. Upmann and Montecristo were produced at Calle Virtudes 609; in 1944, production moved to the factory at Calle Amistad 407 (directly behind the Partagás manufacture). Calle Amistad remained home to both labels from 1944 to 2003. A little over 60 years later, in 2004, H. Upmann found its way back to Calle 23. At the end of the 19th century, Cuba, as one of Spain’s last major colonies, was embroiled in an ongoing struggle for independence. Three wars, drawn out over 30 years, ushered in far-reaching social, political and economic changes.

José Martí became a leading figure in the Cuban and Latin American struggle for independence, succeeding in reuniting revolutionary forces that had splintered apart over the years.

On May 19, 1895, he was killed in the battle of Dos Rios in Oriente province. In 1902, Cuba formally achieved independence and was declared a republic.

23 Back to the factory: In 1936 or 1937 the Cifuentes company, owner of the Partagás manufacture, purchased Byron and Particulares, acquiring the Calle 23 factory by default. Partagás brand cigarettes were produced here at least until 1959, perhaps even longer.

In fact, locals still call the factory on Calle 23 the “Partagás cigarette factory”. It’s a little-known fact that for many years Partagás maintained an extensive and successful cigarette line. And, of course, Partagás wasn’t the only cigar brand that also produced cigarettes on the side.

As is common in Havana, the José Martí building had become weathered and run-down, necessitating extensive renovations. These commenced at the turn of the 20th century.

Restoring the large, stately building was slow and tedious work, but it was clearly carried out with much care and love.

Today, the modern, elegant interior spaces are optimally suited to accommodate the needs of more than 600 torcedores at one time.

Construction lasted until 2004, and thanks to additional outside funding, a schoolroom outfitted with cutting-edge technology was created for the employees.

However, in 2011, we learned that the H. Upmann factory crew had suddenly been moved to the building at Calle Belascoaín 852 (the Romeo y Julieta factory).

The explanation: the roof had been leaking, necessitating further repairs. Many people were incredulous that a building that had just been completely restored had to be fixed up again. Silence fell over the factory on Calle 23. Sadly, nothing has changed since 2011. The factory still stands empty. The official word is that the roof is still under repair, even though there’s no sign of construction.

It is difficult to understand how such an exquisite building could go unused for such a long time. At this point, it seems that the best we can do is to wait patiently to see what becomes of this historic and well-preserved building.

LOCATION
10 minutes from the Hotel Nacional by taxi, in the Vedado neighborhood;