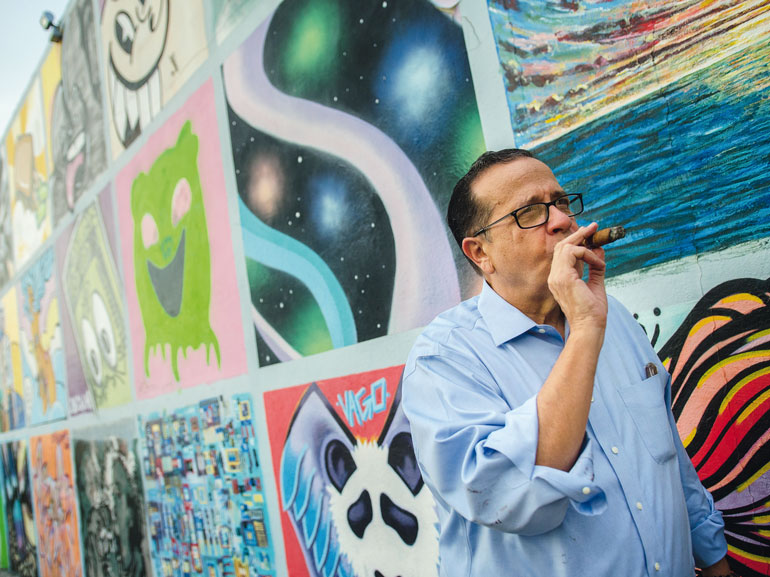 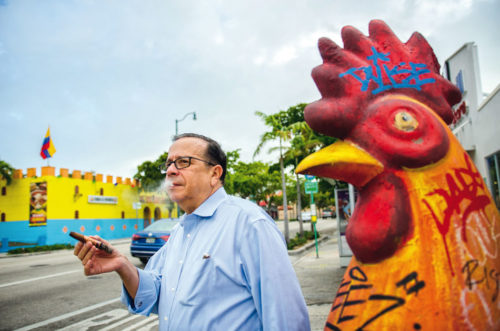 The only way to achieve a good blend is taking your time. Keep changing those leaves. – José Blanco

Early on a Monday morning, I meet up with José Blanco in Little Havana in Miami in a small café on Calle Ocho. Over a Cuban coffee, we talk about José’s life in cigars, which has included being director of sales at La Aurora, vice president of La Joya de Nicaragua, and vice president of EPC.
“My great-great grandfather grew tobacco and so did his son, his son’s son, and my dad,” he begins. “Growing up in New York, I remember my dad smoking, three, four cigars a day. He was a political refugee of Rafael Trujillo [dictator who ruled the Dominican Republic 1930-61].”
After Trujillo’s assassination in 1961, José’s father returned to the Dominican with his family for the first time in over 30 years. Aged 13, José started visiting his uncle’s factory, Tabacalera Palma; the following year, he secretly began smoking cigars. Caught smoking one day by his father, he was told he couldn’t smoke until he was 16, but that didn’t stop him. “At 17, I was making little blends with Piloto Cubano and Olor from differ ent parts of the country,” he recounts.
José’s introduction to tobacco on a professional level came much later, when he was working at Grupo León Jimenes as sales manager for Presidente beer. Today called Empresa León Jimenes, it’s the parent company of La Aurora Cigars, and Blanco had been on their smoking panel for many years when Guillermo León and his father, Fernando, asked him to work for them in 1999. “It was like a dream come true,” he remembers. “To many, Fernando was the most knowledgeable tobacco person in the Dominican at that time.” La Aurora became José’s academy, where he got to dig deep into the art of blending. He worked on La Aurora 100 Años for almost two years, and they went through 40 blends. “To me, it’s one of the best cigars ever made in the Dominican,” he says, proudly.  After 12 years there, he retired, but that didn’t last long. Two months to be exact. After Joya de Nicaragua called, José moved to Nicaragua with his wife, Emma Viktorsson, daughter of Åke Viktorsson, former area manager for Eastern Europe at Swedish Match. He learned a lot about the old school of Nicaragua, although Joya had started to use Dominican tobacco by the time he arrived. Before that, it was all Nicaragua. He dealt with tobacco from Isla de Ometepe and Condega for the first time, and created CyB, which he says is one of the best cigars he’s made to date. That didn’t last long, either. Two years to be exact, before the Blancos moved back to the Dominican and started their own company, Las Cumbres Tabaco. “I got a bit homesick,” he admits, “and it was something we both wanted to do. A lot of people also encouraged us to do it.” For a while, everything was going perfectly until the FDA came along. But then it got too expensive for them, so now Emma runs the company from Macedonia, focusing on Europe. “It’s going very well,” he says. Around the same time, José got a call from a third major player in the cigar business, Ernesto Perez-Carrillo. “He’s one of the last true living legends of the industry, and, like me, he’s very picky and demanding. His New Wave Reserva Connecticut is probably one of the richest, creamiest Connecticuts out there, and the thing that makes it so different is that Ernesto blended it with a Connecticut broadleaf binder, whose characteristics are sweetness, sweetness, sweetness. Another wrapper you can use as a binder is San Andrés Negro. It’s also sweet, but a completely different sweetness than Connecticut broadleaf.” 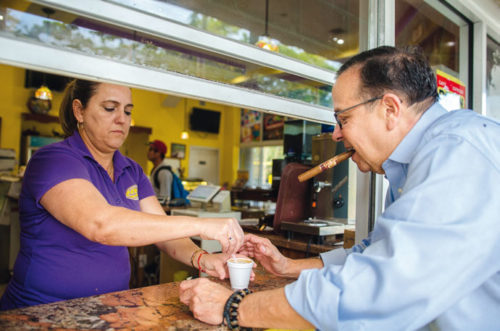 And just like that, we get to José’s career in education. By the time we meet today, he has given almost 900 seminars in 30-plus countries, teaching people the theories of blending and how to smoke. “I just want people to know more about cigars. I want them to learn about the misconceptions, how to store them, how to evaluate them and smoke them slower.” When he first started, he made small cigars out of each tobacco for everyone to smoke. Then they got to try the final blend, but when people began asking him about the impact of the wrapper, he came up with another idea. “I started making a cigar with five different wrappers. I go from mild to strong and I explain the characteristics. Then I ask them which country they think it’s from. People don’t realize the impact a wrapper can have on the overall cigar. How much depends on the wrapper and the ratio of filler and binder to wrapper.” This brings us to another topic of his seminars: misconceptions among smokers. He maintains that one of the biggest is that people confuse flavor with strength. Many don’t smoke maduro because they think they’re strong. “But don’t judge a cigar by the color of the wrapper,” he admonishes. There are six elements to a cigar, José explains: flavor, strength, aroma, complexity, balance, and finish. The hardest ones to achieve are complexity and balance. “It doesn’t matter how good a cigar is, if it has the same flavor, strength and notes from start to finish, it becomes a good, boring cigar. You want a cigar with a lot of changes in it. Then you have balance. It’s like a symphony. Everything has to be in place. How many times have you had a cigar that’s good the first couple of inches, and then it goes flat or one-dimensional?” It’s obvious we’ve entered his field of expertise. He hasn’t touched his coffee for a while, and the intensity in his explanatory story-telling increases.  “If that occurs, two things could have happened. The roller may not have put the leaves in the proper places, or maybe got distracted and put in three fillers instead of four, or the same filler leaf twice. That’s what’s called finish. Many consumers think you have to smoke the whole cigar to know what the finish is. You don’t. Half an inch into the cigar, you know if it has a long, short or no finish, or an aftertaste.” 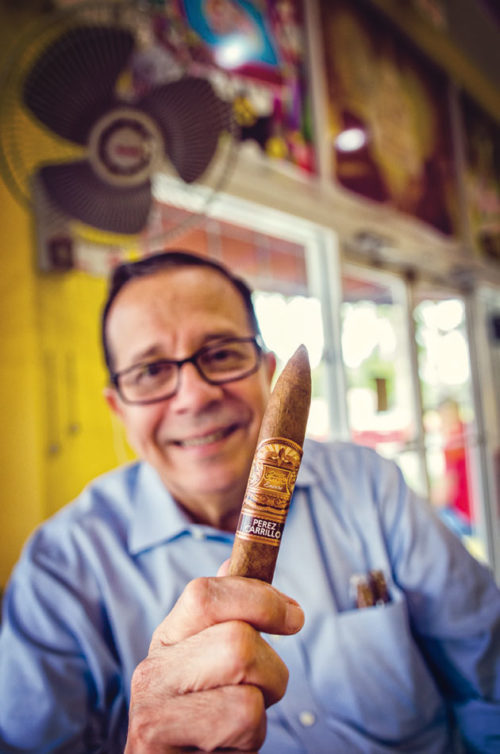 José shows off one of his proudest creations, Ernesto Perez-Carrillo Encore

So the big question is, of course: how do you achieve complexity and balance? “Well, that’s the million-dollar question. You can compare blending with cooking. To cook, you use salt, pepper, garlic, onions, tomato paste, and so on. It’s the same thing with tobacco. You’re using different parts of the plant and different types of tobacco from different regions. People talk about sweetness, but what kind of sweetness? Milk chocolate, or the bitter sweetness of a Godiva chocolate? Taste is subjective. The only way to achieve a good blend is taking your time. Keep changing those leaves.”
The second thing is fermentation. All the time in the world can be taken for this; if the tobacco isn’t aged enough and fermented properly, it will affect the blend. The more mature it is, the better the tobacco burns, smokes and tastes. “That’s one of the great things about Ernesto,” José remarks. “He has so much aged tobacco and he’s really picky. He’s a perfectionist, and nobody can blend a 6×60 blended like he does. It’s something very unique about him.” And now, after two years with EPC, José Blanco is moving on to focus on a new task at hand, his son.
“Both Ernesto and I wanted me to stay, but it’s actually very simple,” he explains. “I was traveling three weeks per month, and I love traveling, but my son is starting first grade now and I don’t want to miss out on him growing up. Being a family man, Ernesto completely understood. But I’m definitely not retiring. I’m going to stay in the industry.”