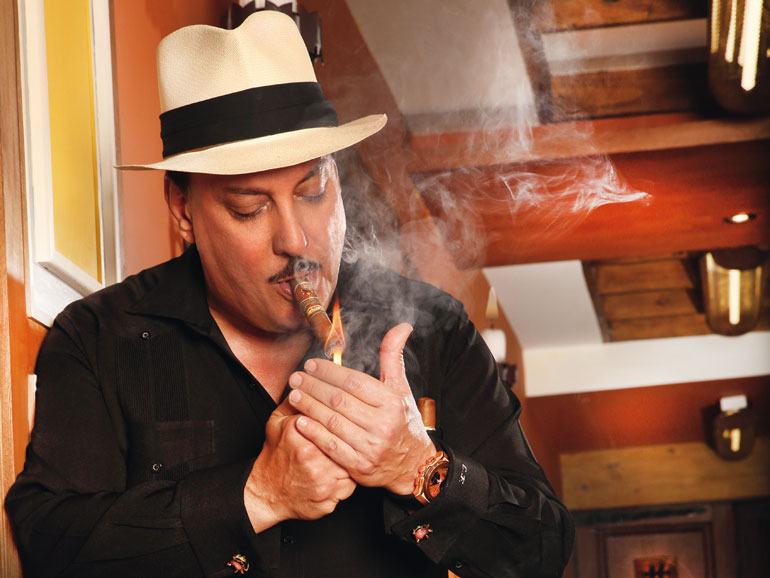 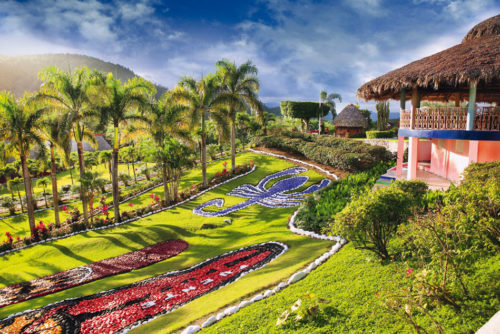 The eight majestic king palms on Chateau de la Fuente, half-way between Santo Domingo and the epicenter of the cigar industry, Santiago de los Caballeros, are the only ones of more than 200 to survive Hurricane Georges in the year 1998. They tenaciously defied the storm, which swept through the Caribbean and the Gulf of Mexico with up to 250 km/h, took more than 600 human lives, and caused almost 10 billion US dollars in damages. As if they want to make it clear to us that, even in the worst misfortune, it is possible to emerge steeled. Back then, Carlos “Carlito” Fuente refused to cut the palms down, even if they stood in the middle of the newly sowed tobacco fields. “I believe there’s something uniquely, even wonderfully spiritual about these eight palms. They are survivors.” Anybody who has skimmed over the 107-year-old company history of the Fuentes will quickly be aware of how many debacles the family has had to endure to get where it is today. Since the death of his father on August 5, 2016, Carlito has been the head of the family. That Fuente is one of the most important cigar families (yearly production approx. 30 million cigars) and produces many of the most coveted cigars in the world is adequately known. But who is this man? What is behind the giant of the cigar world? 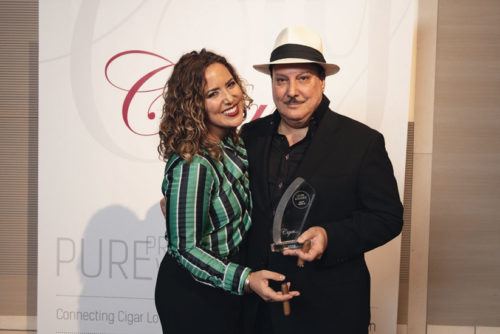 Liana congratulates her father on his Lifetime award

“Overall, I don’t know how I got to where I am today. I’m sure I held on tight to my father’s cape with the intention of not falling off,” muses Carlito. “Family is the most important thing when you’re coping with defeats or with responsibly dealing with success,” he says, convinced. “Ultimately, our company is one family. We are all one.” His guiding principle is not only expressed in every corner of his factory, but also in the landscaping of the delightful Chateau de la Fuente in the Dominican Republic. A picturesque scorpion made from colored stones symbolizes the star sign of his grandfather, Arturo. Not far from it, a Taurus mosaic made from stones decorates the garden – the zodiac sign that Carlito shares with his deceased father. Another stone mosaic adorning the estate is an enlarged design of the Fuente Fuente OpusX cigar band, the colors of which seem to radiate from the ground up to the sky, and, a few meters farther along, the symbol of a child, surrounded by tobacco leaves and setting a dove free. This is a commitment to the Cigar Family Charitable Foundation of the families Fuente and Newman [the J.C. Newman Cigar Company] to support children from the region with school, sports, and health facilities. Symbols are Carlito’s way of expressing appreciation – whether for family and friends, over tradition and responsibility, or simply in business. A handshake from Carlito Fuente, for example, counts for more than a sophisticated contract drawn up between law firms. That’s how he learned it from his father. And that’s also how he became a man of the “old school,” as confirmed by the people around him. Honesty, integrity and loyalty are his foundations. “Trust and friendship can’t be bought,” says Carlito sincerely. “They have to be earned. In good and bad times.” With several families, this unrestricted relationship of trust has grown over generations, which is why business and family-friendly ties have become one over the decades. Such as the one with the Olivas from Tampa, owners of the Oliva Tobacco Company, or with the Meerapfel family in Belgium, which not only cultivates Cameroon tobacco but also distributes Fuente cigars outside the United States. And with the Perez family, whose A.S.P. Enterprises is one of the world’s leading tobacco producers. In addition, with Robert Levin and his family, for whom Fuente has been producing the Ashton brand for 30 years. And, of course, with the Newman family from Tampa. Carlito says: “It’s fascinating that these families, with whom my father or grandfather already collaborated, still work together. The relationship has grown over generations. And all our children feel as connected as we parents do. It’s wonderful. This is the magic of the cigar business.” 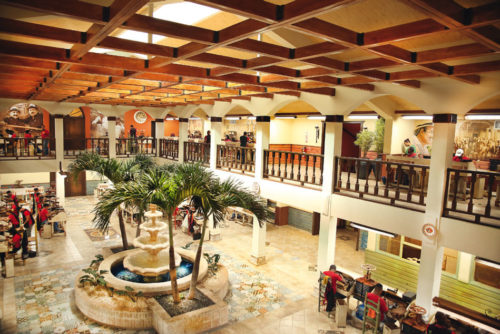 La Catedral, the brand-new Fuente factory in San- tiago, is not only a production site but also a breathtaking cradle of creativity

Symbols and snapshots of important stages of life can be found in every inch of his work place. His office, as well as the new factory, called La Catedral, are showrooms full of memories and an homage to his family and friends. Here there are large-scale photos of his ancestors, family members, close friends like Arturo Sandoval and Andy Garcia … Every corridor is filled with newspaper articles and souvenir photos; every table full of personal letters, awards, signed photos of heads of state, artists, sportspeople … It seems as if Carlito Fuente wants to be reminded at every step that he is a product of his past and owes a lot to many people. He lives and shows this openly. Liana Fuente, Carlito’s daughter and vice president of the Fuente companies, has always looked up to her father. “But it wasn’t until I was an adult that I became aware of the sacrifices and risks he was taking on. And not just him; this applies to all three generations before me. What welded them together,” she remembers, “was that each one of them kept the others going.” No one ever stopped anybody from doing anything. On the contrary, it was always, “If you think it’s right, we’ll do it together. Either we fail together or we succeed together.” In Carlito’s innermost circle are handpicked people with the same values, passions and goals. In addition to the family, this includes Ciro Cascella, co-owner of the impressive Arturo Fuente Cigar Club in Santo Domingo and Carlito’s right hand in business operations. These also, of course, include Félix A. Mesa, cigar manufacturer in Estelí, owner of El Galán Cigars and designated general manager of the future Fuente factory in Nicaragua. But also Jean-Claude Biver, CEO of Hublot, Manny Iriarte, photographer and designer, who, together with Fuente, is responsible for the Hublot and S.T. Dupont creations. And Keith Park, founder of Prometheus Accessories and distributor of the legendary Fuente Aged Selection, also belongs to this circle. Together with director James Orr, Park produced a fabulous DVD that impressively documents both the Fuente family history as well as the development of the Fuente Fuente OpusX.

Left: Two decades after selling the first OpusX, the Fuente Fuente OpusX 20 Years Celebration series was released in four formats Right: During a terrible fire in 2011, thousands of bales of tobacco, partly aged for decades, went up in smoke in the Fuente tobacco warehouse. One year later, Carlito Fuente called this cigar Angel’s Share

The music for it was composed and recorded by Arturo Sandoval; Andy Garcia and Joe Mantegna lent their voices to the documentary. Incidentally, sequences from The Lost City, a film by Andy Garcia (2005; with Dustin Hoffman and Bill Murray), were shot on Chateau de la Fuente. In the so-called House of Dreams, a visitors’ center on the property, all these relationships and stories can be taken in in an impressive atmosphere. “I try to capture, remember and solidify part of my life, so that it becomes tangible for future generations,” says Carlito. “I want to pass on the torch to the next generations so that cigar manufacturers, which today are a species threatened with extinction, will still be able to survive.” In September 2018, Carlito Fuente was awarded the Cigar Trophy by Cigar Journal for his lifetime achievement, which was the impetus for this story. During the two-day visit for this article, he didn’t waste one word on numbers, market shares or business strategies. “What’s important is that we can pay our bills on time. That’s all I need to know,” he says, avoiding such questions. “As long as we can work sustainably and I can take care of my employees and develop the Cigar Family Charitable Foundation, I’m at peace with myself. I myself won’t change my life, whether we’re working on X, Y or Z.” Carlito becomes thoughtful when asked about his assessment about the future. “If we cigar manufacturers want to contribute to the continuation of this industry, we have to promote the goodness of what it’s all about. It’s spreading love and cementing friendship. This is what our industry is about. It’s not the competition between manufacturers. It’s about telling our stories, our history, our culture and the simple values of life. It’s about bringing people together and making this earth a better place. This is the real package we want to offer.” As much as his heart burns for the cigar, he sees the future pensively: “I hope that I live long enough to prepare my master plan for the day when no more tobacco can be grown at Chateau de la Fuente anymore. I know that this is inevitable. Then, the grounds should become an amusement park … a small Dominican Disney World, a playground for happy children.” 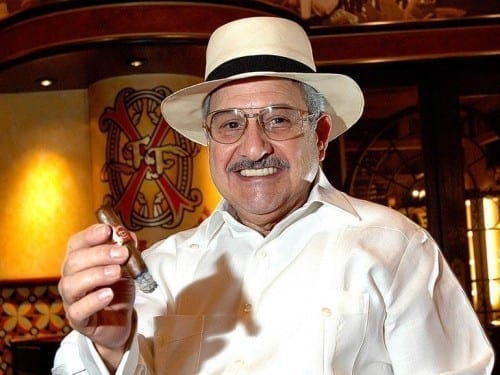 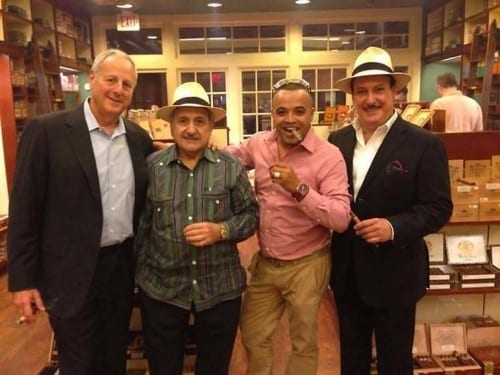