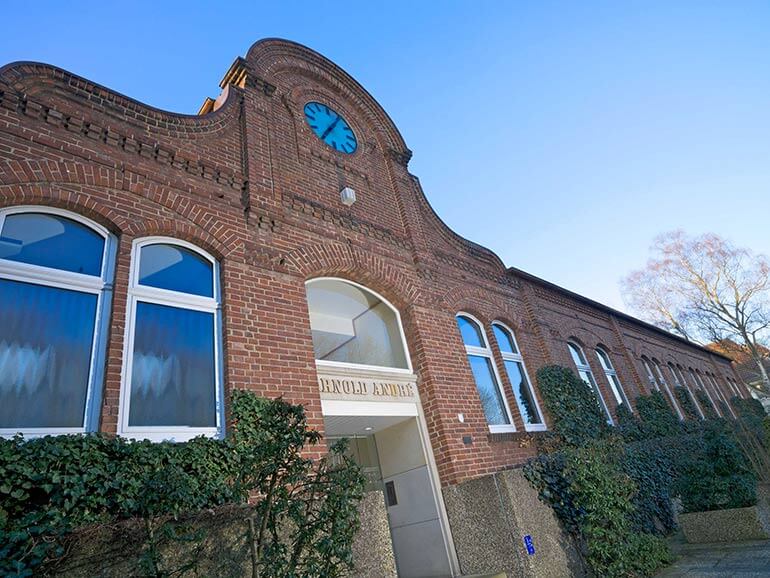 On January 30, 1817, Johann Friedrich Christian André founded a company in Osnabrück, Germany, that manufactured smoking tobacco. We’re taking this occasion to follow the invitation of the traditional company Arnold André almost exactly to the day, 200 years later. Meanwhile, company headquarters are now in the cigar heartland of Bünde.

In our hand luggage we have the question: What do terms like “tradition” and “family” mean to the company that is now in its seventh generation? Aside from that, we also want to find out which direction the globally active enterprise with 850 employees is heading.

Already identifiable from the outside, the brick facade of the building constructed in 1905 is impressive. Head of marketing Jens Schrader explains: “Even back then, Arnold André’s actions were ahead of the times and had a great deal of foresight. The factory was built with the work organization in mind – as well as with its direction facing the northern lights for the better assessment of the tobacco.” The front wing has a dignified feeling and radiates peace. Historical documents decorate the walls; the furbishing in some conference rooms remained untouched. Behind it, this facade has a director team and almost 200 employees working under the managing director Rainer Göhner. 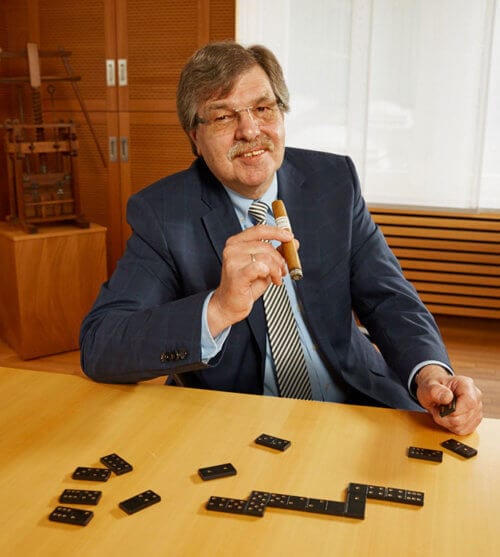 When you hear the name Arnold André, besides the star brands Handelsgold and Clubmaster, the words tradition and family company will also come to mind. “We really are a family company. The family has always been behind it, is still behind it, and will stand behind it in the future,” Rainer Göhner confirms.

Company owner Axel-Georg André is, in fact, present in the company, giving impetus and ideas. The latest company brand, Beast, is for example, “his baby.” “By constantly being in touch with the company owner you can feel that we are a family company. We pass this on to our employees. Hierarchy works in a familiar way here. The company culture is very friendly and cooperative,” sales director Thomas Strickrock observes after working in his position for half a year. And, as it should be in a genuine family, the director team eats together every day and talks and exchanges. Yet it is rare that all are present, because, since Arnold André opened its own factory in the Dominican Republic in 2011, the raw tobacco specialist Stefan Gerkens has a vigorous travel schedule. He is the main figure in the manufacturing and blending process. Together with master blender Carlos Jimenez he composes the most recent cigars. What the two of them concoct there then goes to Bünde and is tested by an in-house panel, which also includes Axel-Georg André.

Bit by bit, Arnold André not only moved the production of the bobbins but also the manufacturing of all the company’s long filler brands to its own factory. But it’s not only in the Caribbean that there’s an upbeat feeling among employees and a striving for novelty. In Bünde, concepts are developed that are then – depending on whether they deal with long fillers or short fillers – manufactured in the facilities in Königslutter, Germany, or in Santiago de los Caballeros.  This much can be revealed: Carlos André and Buena Vista are going to be expanded by new lines and limited editions. For the company anniversary, a special edition of Clubmaster will be released. “A cigarillo that plays with the number 1817 and will be launched in April,” Jens Schrader discloses to us.

With a certain peace and calm – and this is certainly not least due to having 200 years of tradition behind it – Arnold André looks to the future. Even if on the outside there seem to be more and more hurdles – the company has all the means to continue to remain a successful tobacco company for a few more generations to come: experience, competence, a sense for family, a desire to innovate, and extremely loyal employees. A member of the Arnold André clan on average stays with the company for 18 years!

1817 Founding of the company

1946 Launch of the Handelsgold brand

1962 The plant in Königslutter is built; the entire German production has been carried out there since 1993