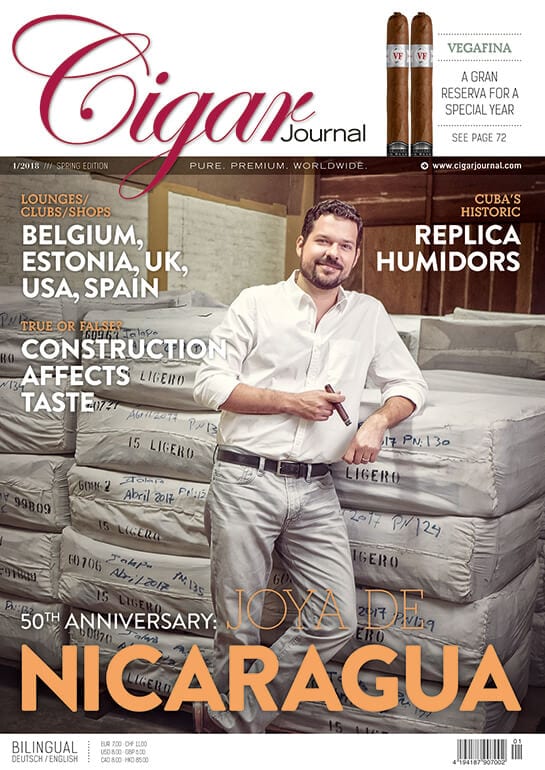 As well as numerous news items about new launches, and events all around the globe, our writers offer up a concentrated charge of firsthand impressions from the cigar world, and in-depth information also in our Spring 2018 issue.

Nicaragua’s first cigar factory, Joya de Nicaragua, is celebrating its 50th anniversary. Over five decades, the company has experienced an eventful history: following a civil war, a revolution and the US embargo, the employees built the factory up again themselves. Alejandro Martínez Cuenca has been the owner of Joya de Nicaragua since 1994. In the meantime, Juan Martínez, Alejandro Martínez Cuenca’s son, manages the operational business of the factory, supported by a young team with a great deal of spirit.

Draw, burn and ash are the essential elements for objectively evaluating a cigar. Whether its construction actually represents the most important criterion of a smoke? Our author Franca Comparetto gets to the bottom of the question.

Want to enjoy a cigar in peace while on your travels? No problem! We’ve visited several cities around the globe for you and scouted out the nicest places. In the new issue, we take you to elegant stores in Brussels and Ghent. It’s then off to San Francisco, which, despite strict anti-smoking laws, comes up with hidden treasures.

The following is an overview of the contents of the Spring 2018 Issue.