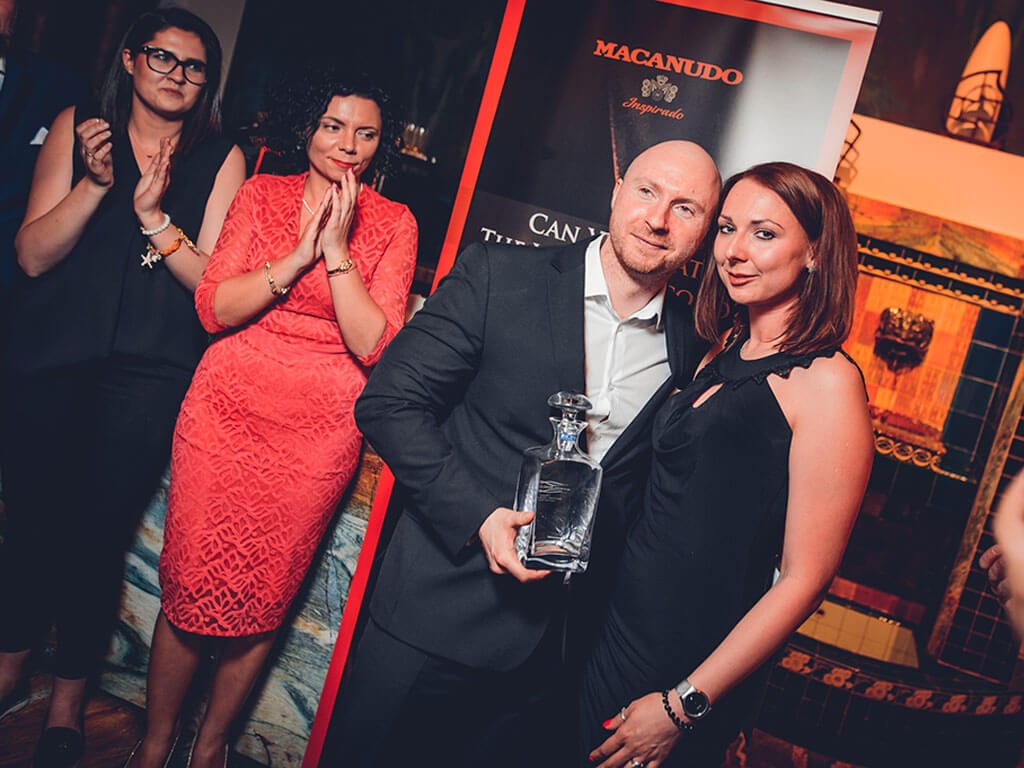 The Cigar Smoking World Championship (CSWC) 2017 in September is just around the corner. Today we look back at a historic event in Poland during the 2017 season of qualification tournaments:

Three hours and 26 seconds – this is the incredible time Tomasz Żołądkiewicz needed to finish his Macanudo Inspired Mareva at the Polish national qualification tournament. On June 3 in Warsaw, Mr Żołądkiewicz not only won this tournament. He also set a new world record in slow smoking and he is the first one to exceed the magic 180-minute line. He will represent his country at the Grand Finale on September 1, 2017 in Split, Croatia.

We asked Mr Żołądkiewicz (see photo: together with his girlfriend Agata Piotrowsk) a few questions about his experience with the slowest race on earth:

What brought you into the cigar world and what do cigars mean to you?

My cigar adventure began about ten years ago at a bachelor party. The cigar was a culminating point at the end of the evening. It was in this moment when I felt that a cigar has something more to offer than just smoke and, I should get involved in the world of cigars. From one cigar to the next I became more fascinated by both the history and character of each cigar. I got to know other cigar passionados. Some of them I can call friends. Now I can say that cigars have become not only my hobby but also a lifestyle. In addition, nothing can be as relaxing as time spent in a heavenly smoke.

In 2016 you already attended the CSWC-Finale in Split, after you won the qualification in Poland, so you are pretty experienced?

In 2016, I had to deal with different kind of emotions at the same time. On one hand I was very lucky, I made my dream come true, on the other hand I had to face my grandmother’s deadly sickness. The latter made it very hard to enjoy my own achievements. Now I am able to recall the pleasant moments with peace and calm. The reaction of my friends and family was unbelievable. It is truly a great feeling.

You achieved exceeded the magic mark of three hours. Can you tell to us about that moment and what kind of technique or tactics you used?

Until the very moment I didn’t believe I could do it. I didn’t have opportunities to go for qualifications to other countries so I had only one chance to pass this magic line. On top of that I felt the pressure to defend my title and I realised that many others had also practiced to win. When other competitors got out of the race and I was the last man standing I knew I had to manage. It was my day and I had the perfect cigar. When I succeeded, everyone was congratulating and celebrating with me. I felt that I achieved something big. It was very emotional. Technics are difficult to apply, because each cigar smokes differently. You have to know what to do in every situation, how to react and, especially how long you can take between puffs.

Your girlfriend set the world record in slow smoking for women and she is in the Top 10 of all. Are you her coach? Do you share your secrets with her?

We practice together. Agata knows all of my technics. She proved that she is as good as me. We went head to head. She could reach 3 hours as well. That was her first serious competition and I am so proud of her. I am also very proud of the rest of competitors.

What are your expectations for the 2017 Grand Finale?

I have no expectations, except for having fun. As far as this year is concerned I have achieved everything I wanted. My goal was to win the qualification in Poland, which would enable me and Agata to participate in the Grand Finale. There is nothing more I could get.

Do you have a message for your competitors?

I wish all of you a lot of fun and success.