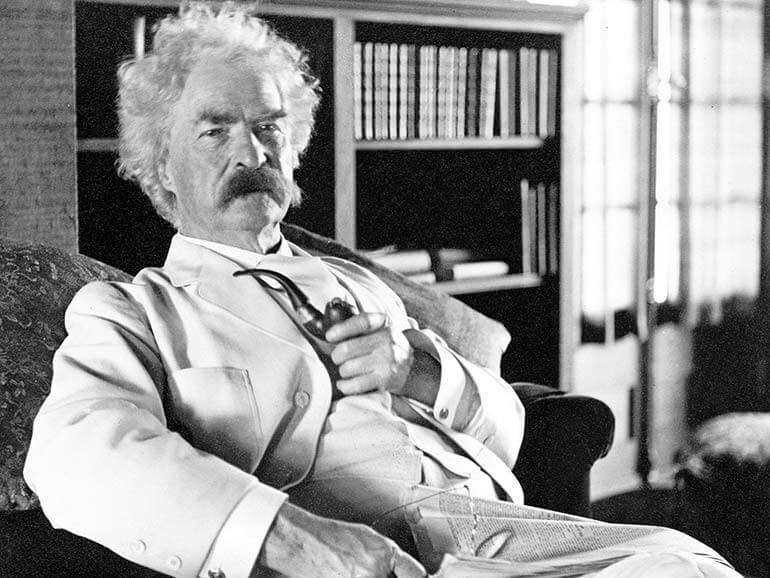 Samuel Langhorne Clemens, alias Mark Twain, began many careers in his life – such as a pilot on the Mississippi, soldier, gold digger …, which he then gave up, however remained true to two passions: writing and smoking. If the author’s word can be trusted, he was born into this world asking the following question: “Does anyone have a light?”

Anecdotes from the Wild West

In his book of “Roughing It”, an account of his five-year sojourn as a gold miner and journalist in the “Wild West”, Twain describes one memorable event while together with other gold diggers roaming through the countryside.

The group got lost in a snowstorm. When the evening set in and the last match had been extinguished before they managed to ignite a fire, they had to come to terms with the possibility of losing their lives. In order to die with at least a clear conscience, each one of them renounced their vice. One of them threw his whiskey bottle into the snow, another one ditched his playing cards, and Twain parted with his pipe. As the morning dawned and the snowfall abated, the adventurers realized that they had just spent the night only a few steps away from an inn – they were saved.

And hankering can be strong. It was not long before Twain furtively made off in order to search in the snow for his pipe. He slipped behind a shed in order to smoke in peace and promptly encountered his two comrades there, one of them having the whiskey bottle on his lips, the other preoccupied with solitaire. 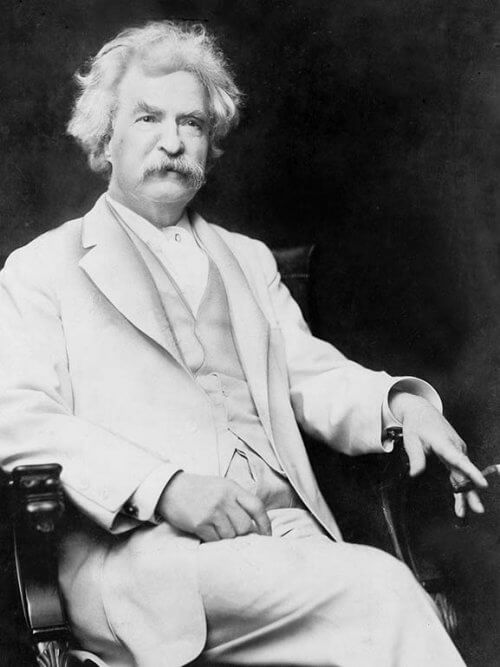 Ullstein Bild – Histopics | Despite all good inentions, Mark Twain put no line to paper without a cigar | Photo: Ullstein Bild

Just One Cigar Per Day?

Mark Twain smoked a lot, sometimes too much. Often he attempted to completely disengage himself from tobacco: “Giving up smoking is the easiest thing in the world. I know that because I’ve done it thousands of times.”

His good intention involving limiting consumption to one cigar per day resulted in smoking ever larger cigars. “Within the month my cigar had grown to such proportions that I could have used it as a crutch”, he reported.

Twain came in touch with tobacco very early on. According to his own statement, he smoked his first cigar at the tender age of eight years. In his homeland, the US state of Missouri, there were gigantic tobacco plantations at that time, cigars were rolled everywhere and they were dirt cheap – consequently, he never had to do without his passionately loved tobacco. According to him, his monthly quota quickly reached one hundred cigars. Twain serenely answered the criticism of health fanatics referring to the fact that his consumption was nevertheless quite moderate: “I smoke in moderation. Only one cigar at a time.”

Twain has often been associated with the Havana cigar, however he himself once said: “I am satisfied with almost any cigar, except a Havana.” He was for the most part buying instead the cheapest cigars available on the market. Expensive cigars were supposedly “made from the hair of dogs, and not even from especially good ones”. Among his friends, Twain’s cigars were a source of disgust. His visitors brought their own cigars, so they wouldn’t have to smoke his brand. According to Twain, it is however rather a superstition to be able to distinguish cigars according to their taste. A man “thinks he can tell what he regards as a good cigar from what he regards as a bad one – but he can’t. He goes by the brand, yet imagines he goes by the flavor.”

Since the cigar accompanied Twain in all situations, it seems obvious that with time he drew certain parallels between humans and the aromatic stogies: “Both are wrapped at the beginning, can later be ignited and end as ash”, he once noted, almost philosophically. After all, he assisted a lot of cigars in meeting their fate before he did the same. Mark Twain died on April 21st, 1910. Wherever it might be that he is celebrating the centennial commemoration of his death this year, it’s one that he certainly wouldn’t celebrate without smoking. Never a man of religion, Twain did not set any clear priorities for his posthumous whereabouts: “If I cannot smoke cigars in heaven, I shall not go.”

This article was published in the Cigar Summer Edition 2010. Read more