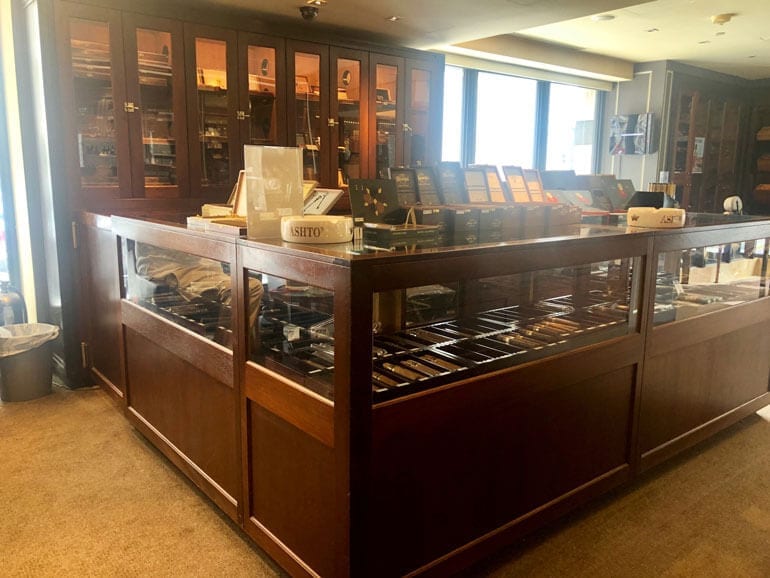 These days there are very few reliable things coming out of the nation’s capital. Despite all of the political craziness and friction, one place that is consistently peaceful is Washington, D.C.’s most well known tobacconist, W. Curtis Draper (Drapers). Founded in 1887 by William Curtis Draper, it is the oldest full service tobacconist in the District of Columbia, third oldest in the United States, and owned and operated by John Anderson and Matt Krimm.

For the last 132 years, Drapers has serviced and met the premium tobacco needs of the public and government officials alike. Upon entrance, walkers-in are surrounded by luxury accessories, cigar memorabilia, handcrafted pipes and cabinet after cabinet of premium cigars. Located 1 block from the White House and adjacent to the White House gift shop, this small, yet elegant lounge is the perfect getaway when wanting to break away from your tour group or if you’re trying to kick back and engage in conversation over a cigar. You may even bump into an elected official of two.

While modern in its look and decor (in current location for 8 years), Drapers is very traditional when it comes to atmosphere. Upon every visit I see and interact with the same patrons, who make it a point to come in daily between sessions, while on lunch or after a full day of work. Even when all of the chairs are occupied, patrons don’t mind standing and huddling around one another to catch up and discuss latest industry releases or news of the day.

Quite naturally, based on its locale in the epicenter of government and close proximity to the International Premium Cigar and Pipe Retailers Association (IPCPR) and Cigar Rights of America (CRA), W.C. Draper is on the front lines fighting for the rights of the American cigar enthusiast. Heavily involved in cigar rights and legislation, one of the proprietors, John Anderson, serves as the IPCPR Vice President of the Board of Directors and Federal Chair.

Anderson and Krimm opened a second Drapers location in 2011 in Bethesda, MD and they are also the proprietors of Civil Cigar Lounge in the Chevy Chase neighborhood of Washington, D.C.