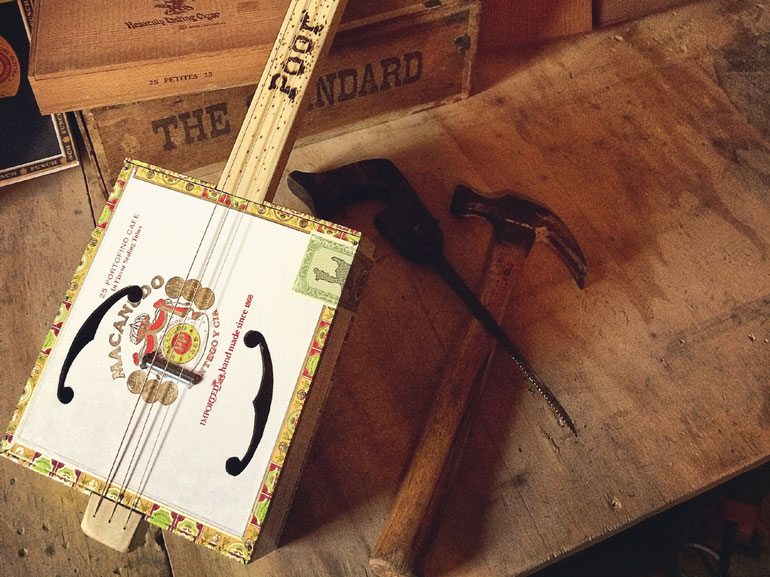 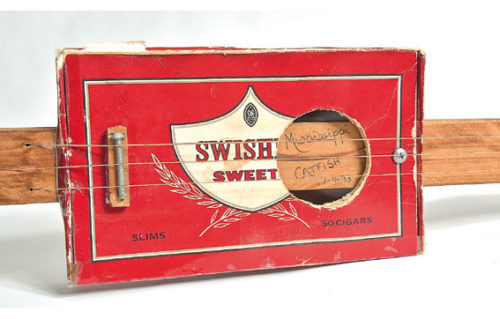 Premium cigars represent something that is purely “Central American;” thousands of miles away lies the birthplace of an American musical tradition: the blues, rooted in the Mississippi Delta. Enjoyed together, music and cigars share a significant connection, stirring an emotional response within the listener and the smoker. But it would take a purely American invention – the cigar box guitar – to forge the crossroads between cigars and music tradition. Dating back to the early 19th century, the cigar box guitar and its even cruder, one-string, “diddley bow” ancestor was created out of necessity by the very poor of the American South. And since necessity is the mother of invention, they were exceedingly resourceful. Soup cans, frying pans, washboards, broomsticks, and buckets, among other common household items, became the means through which these people expressed themselves through music. At the time of the American Civil War, Abraham Lincoln imposed a tax on consumer products; cigars, then packed in chests of 100, 500, and 1,000, were among the goods taxed, and each box required a tax stamp. Soon, manufacturers began packaging cigars in boxes of 25, also known as the “8-9-8” – eight cigars on the bottom, nine in the middle, and another eight on top. Made mostly of cedar, these smaller boxes – usually discarded as trash – gave musicians a better “base” for building their guitars. Moreover, these primal instruments produced an excellent wood tone and resonance when the box was fitted with a wooden stick and a couple of haywire strings. Cigar box guitars and fiddles were played throughout the first half of the 20th century and remained popular up to World War II, with DIY plans being published in magazines like Pop­ular Mechanics. Yet, by the 1960s, affordable, mass-produced guitars had made the cigar box guitar an archaic novelty, and it eventually disappeared. Or did it? Artists like Lightnin’ Hopkins, Albert King, Blind Willie Johnson, Little Freddie King, and dozens more “bluesmen,” many of whom grew up in the Deep South, honed their guitar-craft on their own cigar box instruments. In addition to their music, credit also goes to these musicians for introducing the cigar box guitar to worldwide audiences. By the end of the 20th century a renewed interest in the cigar box guitar had emerged, which today has blossomed into an international community of musicians and craftspeople with a passion for building and playing these instruments that carry their own unique sound qualities. 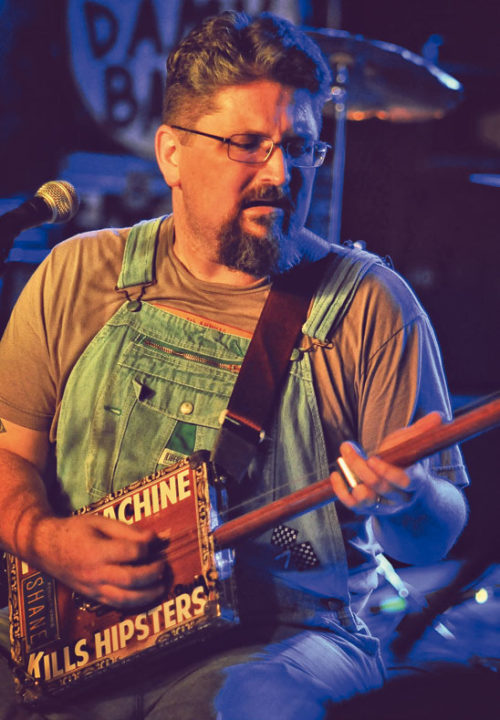 Shane Speal performing with his band, Shane Speal and the Snakes, on a three-string cigar box guitar

Shane Speal is a native of York, Pennsylvania, and is one of the key figures responsible for the cigar box guitar’s revival. Fascinated with the “poor man’s guitar,” Shane, a woodworker and musician, has been making cigar box guitars in the small woodshed behind his house for over 25 years. And he literally wrote the book on how to build them in Making Poor Man’s Guitars (Fox Chapel Publishing). Shane’s first guitar was a three-string built from a box of Swisher Sweets; but as he began building more guitars, he developed an interest in smoking premium handmade cigars. “There are certain boxes that we use because they make great guitars, and I began wondering about the cigars that came in them,” Shane explains. “There’s something magical about when you’re building a cigar box guitar, actually smoking one of the cigars that came in the box you’re building with. I don’t know what it is, it just brings all of this passion together.” So, what cigar boxes make the best guitars? “I love Padrón boxes for their huge size, but I’ll work with just about anything,” says Shane. Among a handful of guitars he’s built are made from boxes of Arturo Fuente Chateau Fuente, La Aroma de Cuba Immensos, Punch Gran Puro, Hoyo de Monterrey Sultans, and Partagás Black Label Magnifico. But his favorite box to work with is the Macanudo Café Portofino. “I built one in 1996 and I still perform with it, but I’m starting to wear a hole through it like Willie Nelson’s guitar, ‘Trigger,’” adds Shane with a laugh. As for what Shane smokes when he’s working on a new guitar, the Macanudo Café is his go-to cigar, while for simply relaxing, he prefers the Tabak Especial from Drew Estate. Although the cigar box guitar was born in the USA, thanks to the internet and social media, the craft has blossomed into an international phenomenon. “Every day, I receive emails and messages from people all over the world who have discovered the cigar box guitar,” Shane says. “This is not just an American thing. The cigar box guitar crosses all boundaries and demographics. Right now we’re experiencing a renaissance in do-it-yourself instrument-making for two reasons: First of all, there are no rules on how to build it; just follow your muse. Secondly, there are no rules for how to play it. That is the most important reason behind the growth of the cigar box guitar movement. Any time you give somebody the permission to play the music in their heart, you’ve created magic.”