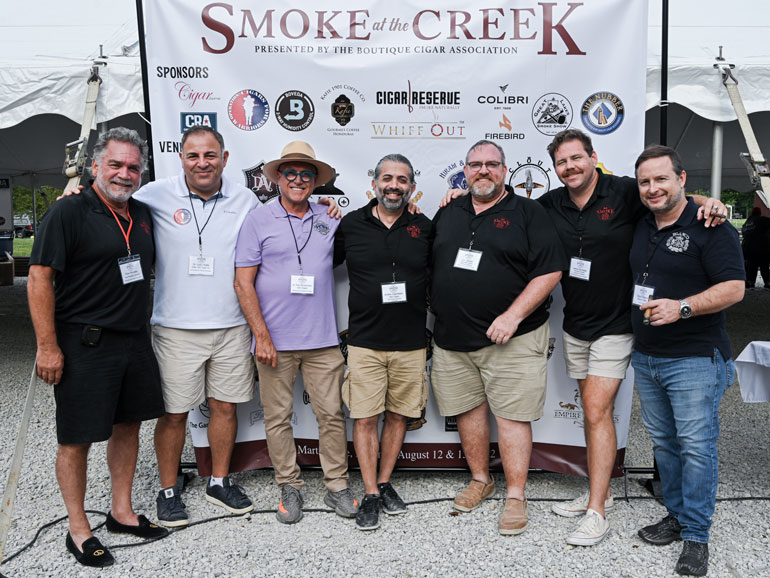 The second annual Smoke At The Creek boutique cigar festival, produced by the Boutique Cigar Association of America (BCAA) brought one thousand cigar enthusiasts and over forty cigar manufacturers and accessory retailers to Indiana’s Cedar Creek Estate Vineyard & Winery for a weekend of great cigars, music, drinks and camaraderie.

Cigar enthusiast and retailer Jerah Hutchins presided over the opening evening’s VIP festivities which set the tone for this year’s festival: one of community, of cooperation, and of mutual respect. Toasts were made, speeches were given, merchandise was raffled, and the very first bottle of a custom-aged barrel of bourbon was given away—the first of 250 limited edition bottles, which guests lined up to take home with them.

Representatives from Cigar Rights of America and Cigars for Warriors, two organizations with whom the BCAA has proudly partnered in the past, were instrumental in the success of this year’s festival.  From big names in the cigar industry like Colibri and Boveda to previously-unknown cigar brands, Smoke at the Creek 2022 represented a coming together of companies in a way rarely seen, and which is fundamental to the mission of the BCAA: on a level playing field ,where the Davids and Goliaths of the cigar world work in cooperation to foster love and appreciation for premium cigars, and to join voices in speaking out for cigar rights and the end to ideological regulation.

The Boutique Cigar Association of America is hopeful the goodwill and momentum generated by this year’s festival will propel the boutique cigar industry to the forefront of modern cigar culture, highlighting the unique perspective it brings to issues that pertain to every aspect of the industry, and giving a voice to the countless small cigar brands both in America and around the world.

Cigar Journal is a proud media sponsor of Smoke At The Creek.