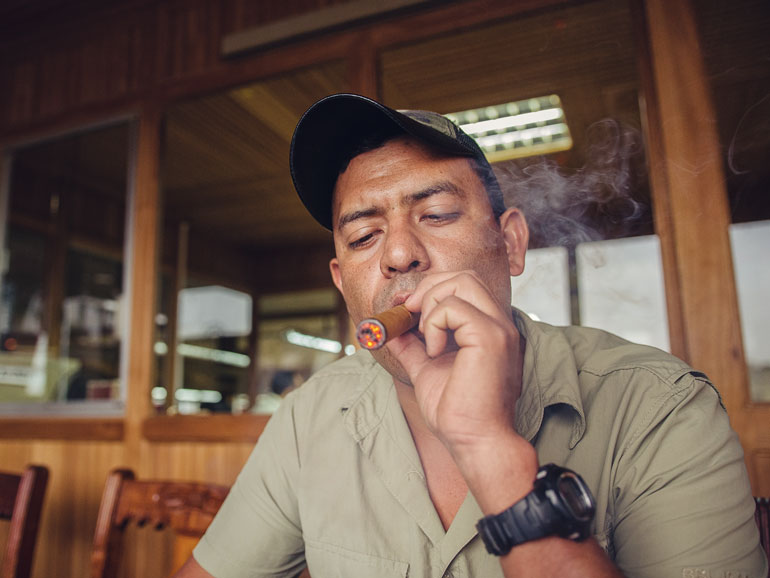 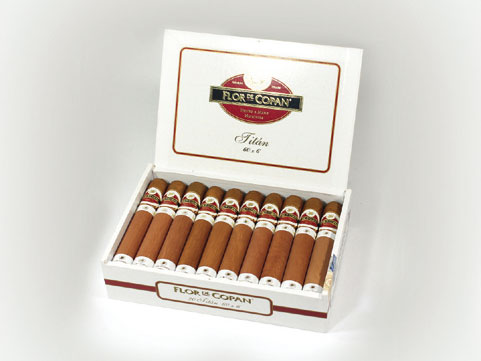 “It changed my life …” Many people may say this about their jobs. But in the case of Orlin Portillo, the changes were fundamental. “I was the son of a single mom, so we had big financial problems when I grew up,” he tells me. “I had dropped out after primary school.” At the age of 22, it was very hard for Orlin to find a job. But when the opportunity arose to be trained as a buncher and roller at Flor de Copan, he took it. And he went back to school. “It wasn’t easy, but I managed to finish school while working,” he says. “I worked until five in the afternoon and after that I went to school.” This was the first big change in Orlin’s life. Thirteen years later, he’s a quality supervisor at the Flor de Copan factory in Santa Rosa de Copán, the factory that gives its name to the tobacco brand which nowadays consumers of 15 different markets can enjoy, in the north of Honduras. “It’s a hard skill to learn,” Orlin admits. “And in the first two years I didn’t see any possibilities for a career. But the company saw something in me and encouraged me to stay on. Since I was in school as well I couldn’t just throw in the towel, and I’m eternally grateful that they kept supporting me. I’m a simple person who comes from extreme poverty, which I overcame day by day. I never thought I’d have a house or even live in Santa Rosa, but as I earned more I was able to establish myself here, and, with the company believing in me, I work toward my goal of becoming a maestro de cigarro.” He even managed to get a degree in accounting, parallel to his job, despite also finding love. “I started college when I was still single. When I got married I had to prioritize and support my family. But I got my degree in the end.” Becoming a cigar master, Orlin learned all the areas of production; now his job is making sure that everything runs smoothly. He’s the main supervisor, more or less responsible for all areas of production. “It has opened doors for me to grow as a person. I supervise all five teams, and I have to be able to identify and solve a problem if there is one. I’m more focused on being a good leader; in order to get respect from the employees, it’s important for me to respect them.” 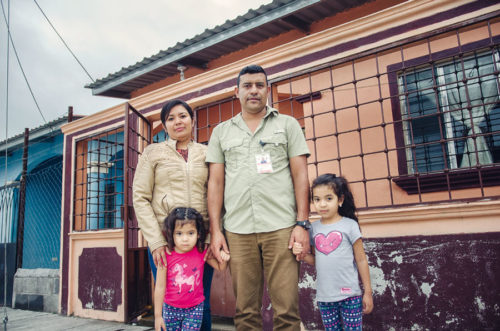 Orlin outside his house with his wife and two daughters

Orlin shows me around the facilities, stopping every now and then to check on the quality of cigars being made. “This Flor de Copan Titán is still not finished; it’s a bit too soft at the end,” he says and shows me one of the cigars he’s taken out of one of the bunchers’ molds. He grabs a tobacco leaf from the guy’s work station, tears off a piece, folds it and forces it into the already made cigar. He studies it, feels it, cuts off the ends to make it even, and puts it back in the mold. “It’s definitely an advantage to know all the steps to making a cigar,” he says. “I’m the only supervisor who’s had a chance to learn about the whole process, from growing, treatment and fermentation of tobacco to bunching and rolling. People who don’t have that can be more pessimistic and not accept the challenges that I’ve had.” Orlin actually knows it so well that he’s received a few awards, among others, for best buncher. “It was probably one of the best, since I didn’t consider myself the best. But I got it for my behavior, ability to follow orders, being on time and making a quality product. It did a lot for my self esteem when I realized they considered me the best.” He keeps walking through the factory, and I suddenly realize something. No one is smoking. “It’s not allowed,” he explains. “We’ve got a designated smoking area over there,” he says, pointing toward an office. There’s always a first, I guess. He stops at an empty buncher work station and picks the bunching machine up from the table. He takes out some tools from his back pocket and starts fixing it – this is also what he does. It has been a pretty fast career climb for the 35-year-old, and watching him in action, it’s pretty clear that he’s a very determined person – driven, with set goals. “I want to advance in the company,” he tells me. “That’s something you can’t stop reaching for. Eventually, I also want to be one of the best tasters, so I can make my own blend. I’ve started experimenting, and I can distinguish between full-bodied, mild, sweet, and so on, but I’m still far from being able to create a blend of my own.” It’s the end of the working day. The employees are packing up and Orlin goes to take his motorbike back to his house, which you can actually see from the factory entrance. Outside the gates, a couple has sporadically set up a stand, selling tortillas and avocados, and, I must say, doing quite well with cigar workers on their way home. His house is in a cul-de-sac in an unfinished neighborhood of small, pastel-colored houses, established by a foundation started by the owners of Flor de Copan, Imperial Tobacco, in collaboration with Lions International. It’s more or less for the employees only, and Orlin and his family were one of the first residents when it was built three years ago. “We got the lot from the foundation. I had been with the company for more than six years. My salary was good enough and I had performed well, so we met the requirements. Then we had a raffle to see which property we were to be allotted and we were lucky to get the biggest one. We’re the only ones with a garage space, which we plan to put a roof over soon. Then, all that’s missing is a car,” he says, laughing out loud. 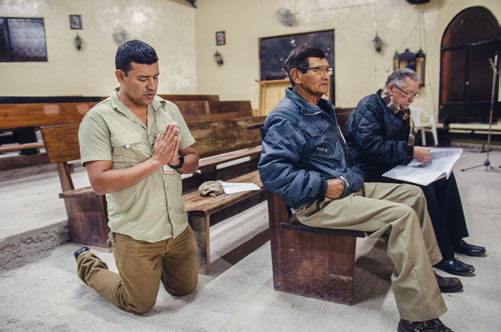 God has played an impor- tant role in Orlin Portillo’s life, and still does; he goes to church three times a week

With his wife, he has two daughters, aged five and three. When their debt to the bank is paid in 20 years, they will own the house. “This is all thanks to Flor de Copan,” Orlin explains. “They hired me, even though I had no education; helped me get back to my studies, and made me cigar master. I’m very grateful to them.”
We enter through the living room where a sofa set takes up almost all the space. The other side is a wall that goes through the whole house, living room and kitchen. Outside, the sun is setting on the pile of unfinished wooden benches that is blocking Orlin’s future garage – work of the carpenter from the opposite side of the street. There is more life outside now, as some of his neighbors are coming home from work and their children begin playing in the streets. Here, Orlin lives a quiet life with his family, but it used to be different. It’s time to address his second life change. “I used to drink quite a lot, and smoke cigarettes,” he tells me. “It wasn’t very often, maybe once a week or so, but two years ago I quit. I told myself that if I continued I would end up dead or in prison. I still have a beer or two, to be social, but I don’t want more than that.” Orlin turned to God instead of the bottle. I notice the only picture hanging on the long wall – The Last Supper. “I’ve always been a believer, but now I go to church three times a week.” It’s one of those nights tonight, so we make our way over narrow, uncomfortable, stony streets up a hill to the Catholic church above. From here, you see the whole city and when we enter there are only a few other visitors. In the front sit two older men. One of them is singing gently. Orlin gets down on his knees next to them and prays. I hear his silent murmurs as he pays respect to God, who got him out of his old habits. It’s a powerful moment, to be honest. Even though I, myself, am as far from religious as can be, I still appreciate a strong experience, and for Orlin, it’s obvious that his faith has helped, if not been crucial to his breaking loose from the chains of his past. The two men kneel before the altar and start singing louder. The rest of the visitors join in. When they are done, one of them signals Orlin to read, so he walks up and kneels down in front of the altar. After that, he grabs a candle and follows the two men as they walk, singing about Jesus to a small back room with another altar. One of them carries a religious symbol and I can’t quite figure out what they actually do in there, but when they come out again they all actually back out. “Strong moment,” I say as we walk out the door after the service. “Yes, it was,” he replies and pats me on the shoulder, as if to say I just witnessed something bigger than life. “I don’t know if you’re religious, but this is very important to me.” I see in his eyes how much this affects him, and this was supposed to be a spontaneous visit. Mass isn’t until later. “Thursday is the day of Holy Communion, and when I take it I feel a lot of respect because I know I’m talking to him. It’s not like the usual mass. I’m on my knees, exposed, in front of the altar and since I didn’t plan on going today I surrendered completely to him when I said my prayers. I felt happy and humble, because, before him, we are nothing. We all come from him and he decides when it’s time for us to go.” 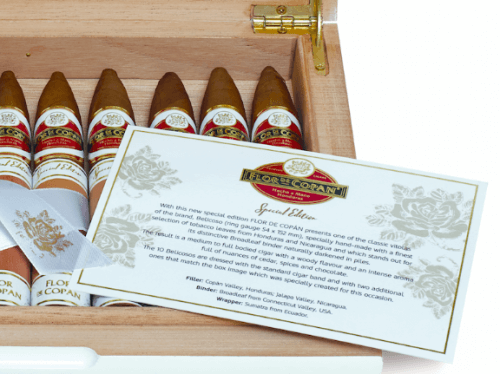 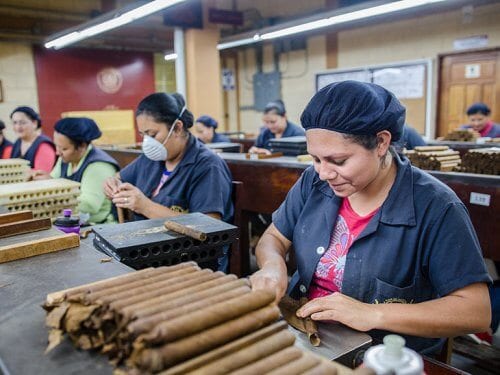