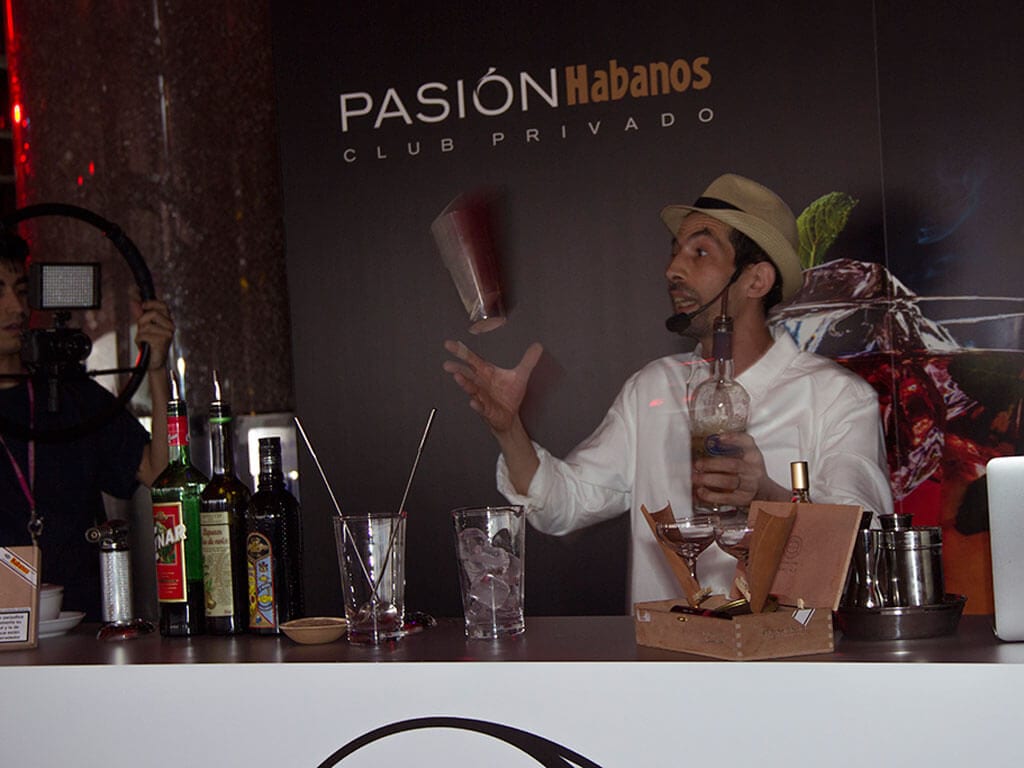 Tupac Kirby, bartender at The Cocktail Room in Madrid, has won the Habanos Perfect Twist Contest. With the Skynight Bar in the Puerta de América Hotel, Madrid, as the host location, more than one hundred Club Pasión Habanos members attended a fantastic display of creativity by five of the best cocktail makers in Spain.

Kirby surprised the jury and the audience with a presentation of his Habemus Habano cocktail, made with a base of light Cuban rum (Havana Selección de Maestros), carob liqueur, and coffee and walnut liqueur, designed to be combined with a full-bodied Habano, the Partagás Serie D No. 4.

The goal of the contest was to combine two trendy products: the Habano cigar and a cocktail – products that are a fashionable combination in Spain due to their sophisticated match.

The jury consisted of journalist Sergio Sauca, the famous comedian Antonio Castelo, sommelier Manuela Romeralo (winner of the Habano Sommelier contest 2006 at the Habano Festival), and the Habanos brand ambassador, José Andrés Colmena. The judges had to evaluate not only the good combination of cocktail and cigar, but the bartenders’ performance in front of the public.The cocktail presentation of the Argentina-born Kirby was very good and original, although he had already made it to the final with a surprising video in which he rapped his presentation.

Imaginative Display
Cisco Rodríguez, bartender at Peyotesan, Madrid, chose a Hoyo de Monterrey Petit Robusto to match his cocktail, La Giraldilla. With the help of a chandelier and dressed as a pirate, Rodríguez raised the epic of the Spanish explorer Hernando de Soto, who discovered the Mississippi River and traced it on the quest for the fountain of eternal youth. The cocktail had a brandy base and reduction of rum, with cocoa and ginger syrup, three citrus juices, egg white and tobacco bitter. It was introduced to the public inside an original glue tube.

Next, Manu Iturregi, bartender at Residence Café, Bilbao, Basque Country, touched the hearts of movie lovers with his cocktail Il Capo, which combined perfectly with an H. Upmann Magnum 46. Iturregi departed from the combo that, as told, made the actor Marlon Brando famous in the filming of The Godfather – whiskey and amaretto, subsequently named “The Godfather” – and gave it a new twist with Amontillado sherry, a spoon of smoked pineapple marmalade and a few drops of bitter. He presented it in a glass with chocolate frosting.

More classic but still a good combination was the cocktail by Borja Mauriz, bartender at The Doctor Cocktail, in Salamanca, north-west Spain. He went for brandy as the base of his cocktail, El Lector (The Reader), to match a Partagás Serie D No. 5. He presented his creation as a combo, part-Harvard (cognac, vermouth, angostura) and part-Rob Roy, its whisky version, together with an extra-aging of two weeks in a French oak cask. The cocktail was presented to the public in a test tube.

The final contestant was Curro Marín from Granada, Andalucía, who presented a refreshing fusion between the mythical Daiquirí from El Floridita, Havana, with a gin distilled in his homeland. Marín did a live final distillation of the gin with cane syrup, adding orange juice, a little bit of June liquor and a hard streak of haba tonka, and ended his performance with smoke and fire. The public was able to try Curro’s refreshing daiquiri-gin in a closed plastic bag with a straw.