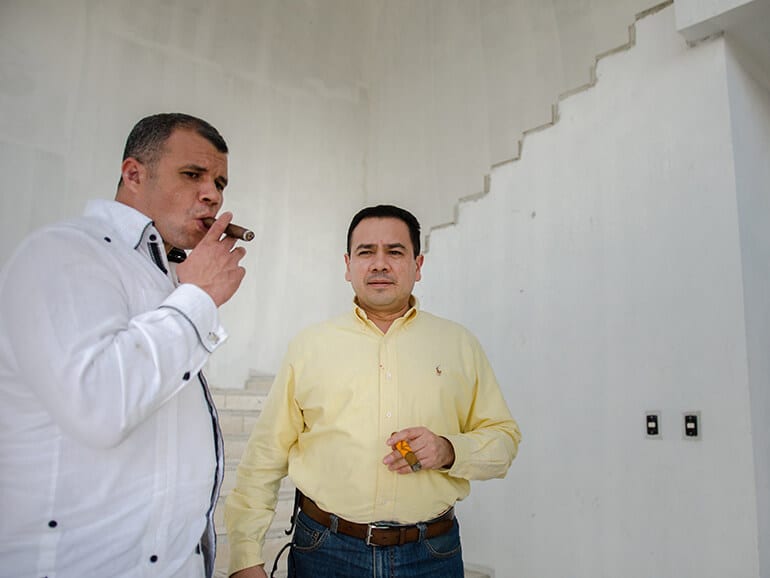 There’s still a lot to do when I visit what is going to be the new Camacho factory in Danlí, Honduras. All around this massive building, workers, with or without the proper security gear, are climbing around on scaffolding, drilling holes in walls, mixing cement and connecting wires. “ This is where we’re going to store material for packaging, and that’s where we’re going to have the deveining machines,” Manuel Batista says, as he and Luis Tábora give me the grand tour. We walk up a semi-finished staircase that has no railing and the main rolling area opens up in front of me.

The entire place is 21,000 m2, almost twice the size of Camacho’s current factory. “We will have our own curing barn and fermentation there and we’ll start growing our own tobacco here in Honduras.” “Until now, all our own tobacco has come from the Dominican Republic, but hopefully we’ll have our first crop this year,” Tábora adds. “Up to now, we’ve been dependent on other suppliers, so it’s good to have another source of tobacco. We’re taking control of our own supplies.”

The plan to build a new factory came about two years ago and construction started in May last year. The reason was an expected increase in demand. The company is growing and production is expected to double within the next five years. It wasn’t certain from the start, however, that it would be built in Honduras.

The head office was deciding between Estelí in Nicaragua or Danlí, but the company already had the workforce in Honduras. Camacho had started growing tobacco in Condega, Nicaragua, but at the factory they would have had to start from scratch. Oettinger Davidoff then took over Tabacalera Santiago in Estelí as well. Having operations in both places is beneficial due to the facilities being only about two hours apart; they are able to use tobacco from both countries. In addition, if Camacho wants a place to prepare the tobacco, for instance, one facility can be used for both. It is an impressive facility, with a very high ceiling and a lot of light. Behind the main building is a big storage room for the tobacco; in front, the administration offices. In comparison, the current factory seems small, dark and humid, which it also is.

Camacho now not only hopes to produce 24 million cigars within the next five years, the company also wants to show its appreciation for its employees. “Many companies have come and gone, but with this investment we’re showing that we believe in them,” Batista says. “ This will give [the staff ] a better environment to work in, and they know now that we are here to stay.” For Batista, this has been one of the biggest challenges. In August last year, he moved to Honduras from Santiago in the Dominican Republic, where he worked for Davidoff , just for this job.

“I had to first establish my leadership and then try to build a good relationship of loyalty, trust and good communication instead of fear of the power of my position,” he says. Which is not always easy for a newcomer, often for more basic reasons than others. “Sometimes they don’t understand my dialect. Some words don’t even mean the same here. The other day I told this guy we’d do something ahorita, which means ‘now’ in the Dominican Republic, but he just stood there. ‘No, ahorita,’ I told him again until I realized that it means ‘later’ here. So now I’ve learned to say luego. Anyway, I try to listen to what [the workers] have to say, value their opinions and encourage them to come with suggestions.”

Tábora adds: “It used to be a family company where the owner made all the decisions, and that’s what [the staff ] is used to. Since the general manager stayed on after Davidoff bought the factory in 2008, this culture existed up until recently, so it’s a challenge to change that mindset.” “Sometimes they don’t feel comfortable when we try to have an exchange of ideas,” Batista says, “but we want to hear their ideas.” 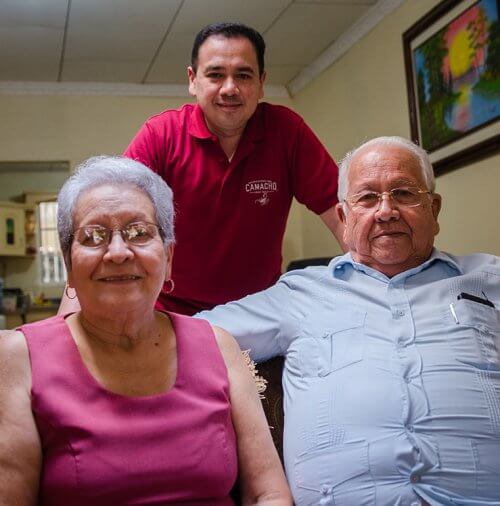 For lunch I go with Tábora to his parents’ house, where he stays during the week. When he took the job at Camacho two years ago he and his wife decided to move to Tegucigalpa instead of Danlí with their three children. Every weekend, he makes the one-and-a- half-hour trip back to the capital. “My wife and I thought it would be better for the kids to live in Tegucigalpa. The schools and the home environment are better, and it’s not that far. Sometimes I go back in the middle of the week, too. It’s just not possible at the moment, with the work demand. In the future I hope they can move here, or maybe we move to another city.” It’s also a way for him to spend more time with his parents, he says. “We’ve moved around a lot, so I haven’t been back to Danlí for 20 years. This is like a second chance to spend time with them at this stage of their lives, when they live by themselves.”

This is Tábora’s first job in the cigar industry, and he’s “the finance guy,” as he puts it. “I’m the guy who says ‘no’ when everybody wants me to say ‘yes’,” he says with a quirky smile. However, the move brought a lot more responsibility than that. Batista and Tábora are currently multi-tasking and they usually work until late in the evening. “We deal with a lot of things we normally wouldn’t,” Tábora explains, “like people matters, purchasing, logistics, computer matters, legal things and talking to suppliers.”

The conditions at the new factory seem immensely better, which apparently other people also have recognized. “A representative of one of the other big cigar companies here wanted to see the facilities,” Tábora tells me. “Afterward, he said that it’s really bad for them and the other companies now, because once cigar workers have seen this place they will never want to work in their factories again.” One of the reasons Tábora took this job was the conditions of the workers. “I grew up here, so I know there are improvements to be made in this industry. I saw an opportunity to make a difference.”

Even with the new philosophy, it wasn’t until the annual company party at the end of 2015 before the staff found out about the new factory. In customary “old managerial style,” the new facility was kept confidential, but once the workers saw the construction site they began to suspect that something was going on.

After the workday is over I accompany Batista to the house he rents in the hills with his wife and their two sons. It’s nice and large, has a swimming pool and a big, lush garden, a hammock and two rocking chairs on the spacious patio. Batista didn’t hesitate to move when he was offered the job in Danlí. “It’s what I had dreamed of and worked for, so I was all smiles,” he says. Batista grew up around tobacco, working at his father’s tobacco factory, OK Cigar, during the summers as a child. He helped his father in the aging room, with quality control and packaging. When he graduated from high school he worked there part-time while studying in the afternoon. He was later promoted to production manager. 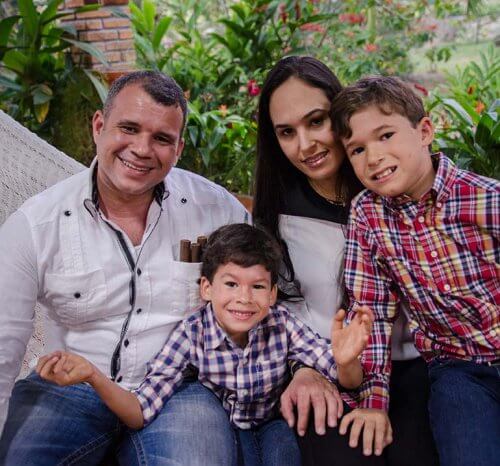 In 2008, Davidoff bought the factory which they already partly owned, and last fall, Batista moved to Honduras. “When I said yes, Davidoff told me to talk to my family first, but I was sure they were going to say yes.” His wife, Gladys, says, “I told him that as long as the four of us are together it will be alright.” “It’s been easy to get into Honduras,” Batista continues. “My wife felt very alone the first two weeks, but now it’s a lot better. My son, Brian, even has a Honduran accent now.” “Ahorita means ‘later’ [in Honduras], not ‘now,’ ” I hear the nine-year-old say in a firm voice from the doorway. Batista and his wife laugh.

“I didn’t know anything about Danlí, and when we drove here the first time I was wondering where we were. [There were] mountains everywhere, but it’s ok. On weekends we go to Tegucigalpa, since there’s not a lot for my kids and my wife to do here. You read a lot of bad things in the news about Honduras, but we feel safer here than in Santiago.” In other words, they’re here to stay. “My contract is for one year, but is open for renewal, and I really like what I do here. We’ve got a good team and Luis and I work well together. We even call each other compa now. Compadre.”