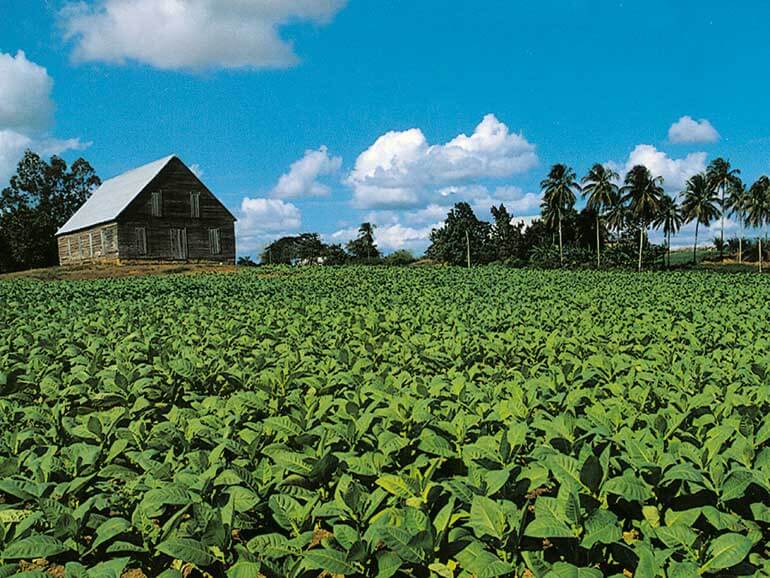 To begin with, a little geography and history: Honduras is at the centre of the Central American isthmus, its northern and eastern shores washed by the Caribbean, with the Pacific Ocean’s Gulf of Fonseca to the south-west. The republic has a population of 6.5 million, and itsneighbours are Nicaragua to the south, Guatemala to the north and El Salvador to the east. The country is dominated by a mountainous central massif, while a constant north-easterly Passat wind provides regular rain and damp warm air conditions in which the tobacco plant flourishes and in which the mostly Cuban exile vegueros and tabaqueros soon felt at home.

Honduras is the home of major brands such as CAO, Camacho, La Intimidad, La Libertad, Peterson, Puros Indios, Toraño, Zino, and many more. Tobacco was grown here by the Mayas as early as the 5th century 1000 years before Columbus first set foot on Central American soil and gave the name Honduras-the “deeps“ – to the vast country beyond the cape.

From Tegucigalpa to Danli

A large modern aircraft takes us from Miami to the Honduran capital Tegucigalpa. I am not too sorry that Wolfgang Held, an Austrian cigar importer and internationally renowned designer, has been held up by business matters in Miami and left me in the delightful hands of his charming wife Marlies.

Through the window we can see thick cumulus clouds into which the plane often plunges. In Honduras, the largest rainforest region of Central America, densely forested mountains alternate rapidly with luscious green valleys. Tegucigalpa occupies a relatively narrow valley, and the plane descends in a steep spiral, with the mountain slopes visible on one side and the first houses, cars and people so close we could almost touch them on the other side.

After passing through the almost informal and friendly immigration controls, we are pleasantly surprised to find Maya Selva, the Franco-Honduran cigar lady, waiting for us in person. For the next two hours in the pickup truck to Danli I can enjoy the role of a true king of the road, flanked by two enchanting ladies and a mighty Flor de Selva El Galan between my fingers. The route takes us through magnificent valleys, over mountain passes, past sleepy villages, horse paddocks and old tile-roofed churches. Vast banana plantations testify to the long arm of the United Fruit Company, and it was here that the contras gathered in their war against revolutionary Nicaragua to the south. 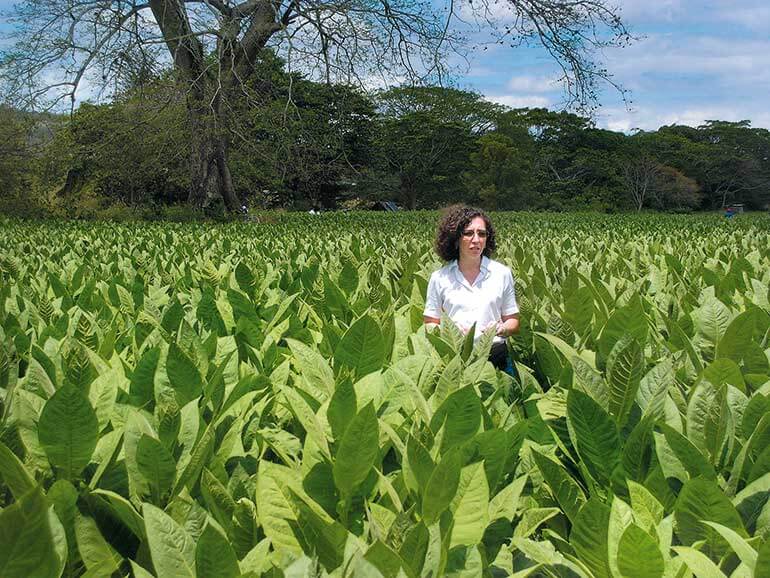 We come to a sudden halt by a small tobacco field. It is early May and the harvest, the campaña, has just begun. Things are later here than in Cuba, sowing beginning in January and the harvest three months later. Traumatised by the devastation caused by the dreaded blue rot fungus, which in the past destroyed the entire harvest on more than one occasion, the farmers deliberately shifted the vegetation cycle into the drier season.

In Honduras there are three regions in which tobacco is cultivated: “Copán in the east, Comayagua, the smallest region, accounting for around ten percent of total production, in the centre, and here..“, Maya Selva points to the savannah hills all around, ” the largest area, the high-lying valley of Jamastran. My Flor de Selva is made up of 40 percent Copán and 60 percent Jamastran.“ In the Vuelta Abajo in Cuba, the earth is rich and an almost vivid red. In the Jalapa Valley in Nicaragua, a volcanic region, the soils are hard and black as ebony. And here in the Jamastran Valley, the soil varies from grey to pink, with the occasional touch of reddishness. There is a constant humidity in the Vuelta, up here in this mountain valley, it is comparatively dry. The main cultivation is Connecticut and Cuban Seed Habana 2000 wrappers under canvas, filler tobacco out in the sunshine.

With the Connecticut, a plant that grows to a height of two and a half meters, or almost 8 feet, and bears up to 26 leaves, the attractive pastel pink blossoms are left on the plant. The desbonado, a Cuban practice of systematically removing the blossoms, is applied only to some of the Habana 2000 plants here Honduras. Only an experienced Veguero knows the criteria are applied. “Starting from the top, the leaf types are known as ligero, seco and volado viso.” Our delicate and energy-laden hostess is forced to stretch out to reach the ligero.

If the blossoms are removed, what may happen is that all the growth energy goes into the leaves, making them too thick. A short digression on tactile sensations: If you feel tobacco leaves in Cuba, they are often slightly sticky thanks to the many essential oils in the plant. In contrast, what stands out in my memories of Honduras is the feeling of the softness of velvet. A huge casa del tabaco stands close by. The drying barns in Honduras are very large. Marlies and I pay close attention to our guide and master, who explains that the humidity in the hall is regulated using a fine spray drizzle. The smell of the drying tobacco is perhaps not quite as acerbic as in Cuba, and similarly, the smell of the next stage, fermentation, which only takes six months for the Honduran ligero, is much milder than in Cuba.

After a peasant lunch with tortillas, ticucos and tamales de viaje with adobo sauce – delicacies wrapped in maize leaves – and a cool local beer, our bubbly hostess takes her leave: “have to go to Villa Zamorano today and Nestor (Plasencia, editor’s note) tomorrow to try out some new blends.“

In the Realm of Don Rolando 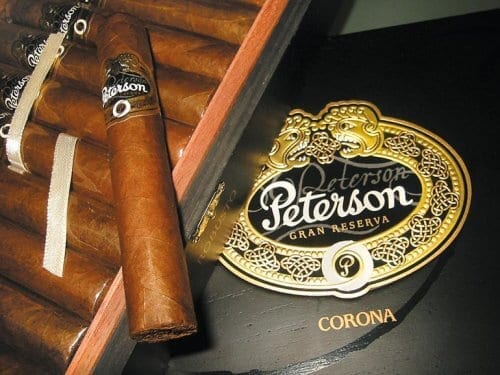 We’re not left on our own for long. Alex Diez, Don Rolando Reyes’ grown-up grandson, comes to take us to the Puros Indios factory, not far from which stands the company’s own farm, where we stay overnight. It is also an ideal spot for Don Rolando to oversee his realm.

The sun is setting over the hills, time seems to have stopped for a while. Without saying much, we sink, somewhat exhausted, into the comfy armchairs of the hacienda and light our cigars-the dust from the tobacco fields clinging to our shoes can stay there for all we care. It is one of those rare moments of harmony and mutual understanding, so perfectly described by Maya Selva in the context of her Petit Cigares: “A brief moment of tenderness, perfectly balanced…“

At the entrance to the brand-new factory flutter side by side thewhite and blue stripes and five stars of the Honduran flag, and a slightly smaller Cuban flag. The slim, white-haired patriarch gives us a warm welcome, his beloved aliados in his hand, even at this early hour of the day. His snow-white shirt is embroidered with the name “Rolando“. We ask when he starts his working day, and the answer comes from his daughter Oneida, a blonde latina who never seems to lose her good mood: „My father is an indefati-gable workhorse, rarely in his bed before sunrise. During the night he wanders through the halls and checks the cigars that were rolled during the previous day.“ The industrious Don Rolando impishly claims 130 years of professional experience“ – 65 years as a taba-quero, and another 65 years of overtime. 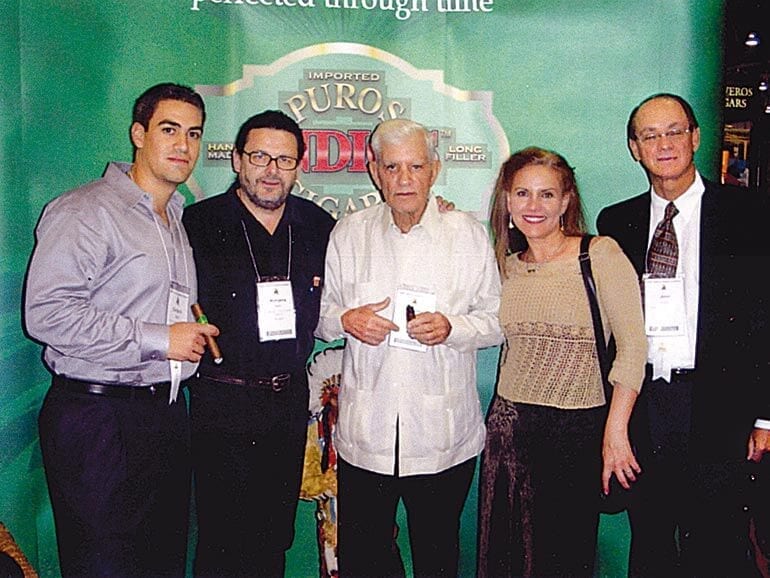 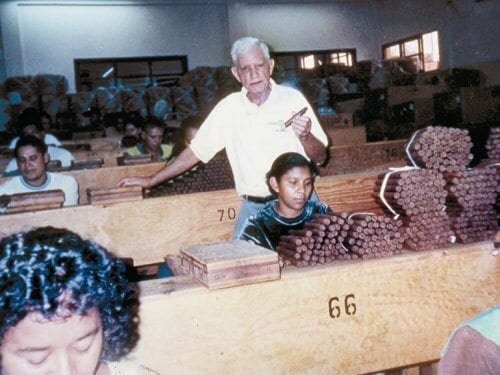 He and his family did not have an easy start, a fate he shares with the Plasencias and the Toraños. Emigration from Cuba with family and small children, a difficult new start in the USA. The cooperation with Lew Rothman’s J. R. Cigars, the USA’s largest cigar dealer, had its ups and downs, but it gave him a fresh impetus. His life’s work was crowned by the construction of the new factory in Danli, a scene of busy activity. Tobacco is sorted, weighed and rolled by a largely female and well-fed workforce that works with concentration combined with cheerfulness and a generally relaxed feeling. Foreman Maria Luisa darts past with an armful of torpedos.

Everything is made by hand here.The patriarch is greeted with respect. He can be pretty severe when his keen eyes spot even the slightest fault, dispatching the guilty cigar with a quick gesture of his hand. Nor can it be denied that Don Rolando has a slight tendency towards the eccentric, what with his huge formats or his refusal to use Honduran tobacco in his factory in Honduras. The sunripened Sumatra wrappers from Ecuador are supplied by the Oliva family, friends with whom he has worked ever since his time in Cuba. The fillers come from Nicaragua,Brazil the Dominicam Kepublic.

An Offering for Yum Kaax

For a while my mind is with the cloud of smoke from my cienfuegos, trying to pick up the light precious-wood notes. But then I drain my mojito and, having taken brief but cordial leave from my charming guide and the hospitable Reyes family, I make my way to the bus station. As the green landscape drifts past I’m on my way to the capital and then to San Pedro Sula – I reflect on what cigar I should use to pay my respects to the ancient Mayan harvest god, Yum Kaax: a CAO from the ever-cheerful Cano A. Ozgener, a full-bodied Camacho, a Flor de Copán with its fine bouquet ora Maria Mancini, the inspiration of the writer Thomas Mann. As I climb the hieroglyph stairs of the ruined city of Copán, I can’t help thinking about what Maya Selva said: “If you find Dominican cigars too subtle and the Cubans too heavy, then Honduras is just the place for you.”

With a tobacco blossom behind my ear and a flavour some cigar in my top pocket close to my heart, I’m off to new shores and green valleys.

This article was published in the Cigar Journal Spring Edition 2006.  Read more