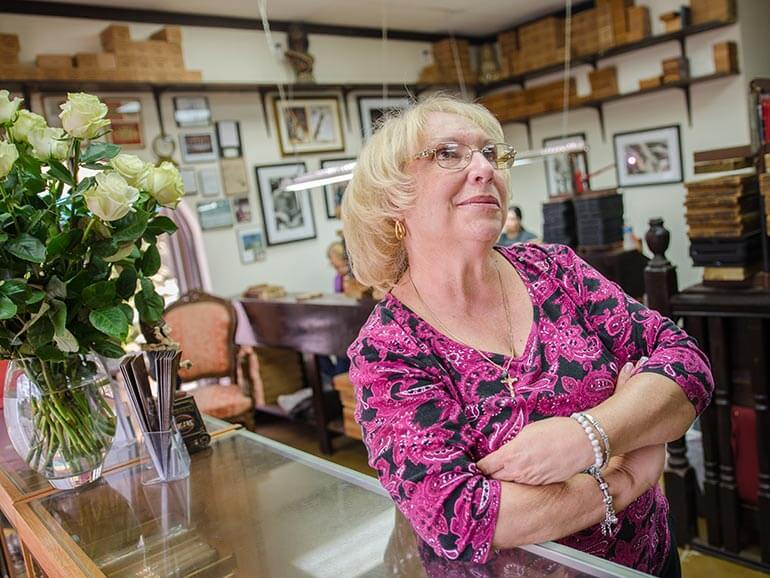 For Sandy Cobas it’s all about the stories. Someone wanting a cigar made at her factory had better bring something to the table. And at El Titan de Bronze in Miami there are many stories to be told, starting with the name.

“I don’t want to work with anyone who’s not sincere about what he wants to do,” Cobas says. “I like if there’s a story behind it, because I really get into what I’m doing. If you don’t have the passion it’s not going to turn out well. The brand is named after Antonio Maceo one of the three patriots of Cuba alongside José Martí and Máximo Gómez. He was very big and husky, and he fought with a machete in the Spanish-American war. Since he was mulato they called him El Titan de Bronze. I always liked that name. It’s very masculine and that’s our heritage. I might’ve been brought up here, but my roots are Cuban. I talk, eat, dance and feel Cuban, but I love America too.”

The factory is located on the famous Calle Ocho in the Little Havana district, Miami. After having worked in the liquor business for many years, Cobas decided to turn to cigars – a somewhat rash decision, as it turned out.

“It was during the boom in the Nineties. People used to come in and ask for cigars, so I thought we should add that to our selection, since liquor and cigars marry well. So we got a roller and some humidors. The problem was that I thought cigars were included in the license I already had, you know from the ATF*, the Bureau of Alcohol, Tobacco and Firearms, but a customer of mine, who worked undercover for the ATF, came in one day and asked me what I was doing.” It turned out that, to sell tobacco, a specific license was needed. So with the help of her customer, Cobas applied, got the right license, and finally moved from Westchester, where she’d had her liquor business, to Little Havana. She has been there for 20 years.

“We started off with one or two rollers and then slowly expanded, depending on what the business demanded. We only had half the space that we do now. Everything happened in here,” she says and looks around her small office. 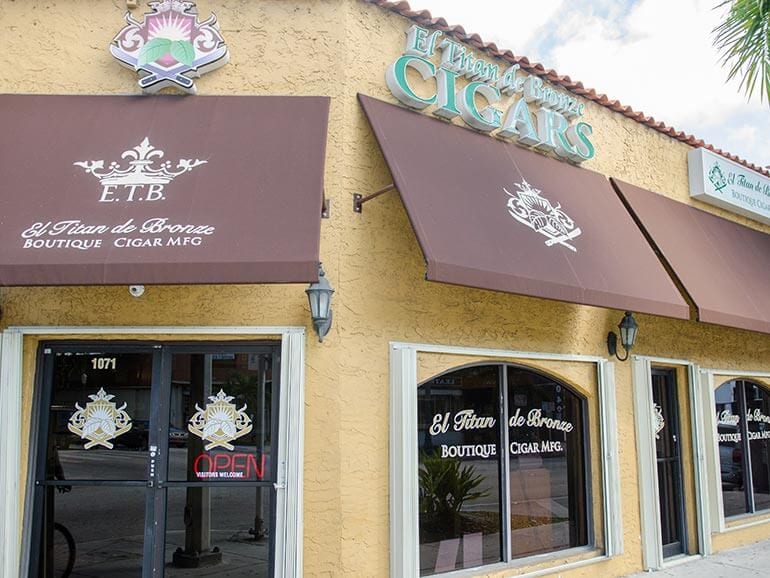 This area was once full of cigar factories, like My Father, Perdomo and Padrón. When they moved their production to Central America, El Titan stayed put. Today Cobas has ten rollers in what is one of very few factories left on the street. She produces 250,000 to 300,000 cigars a year, and that’s about as big as she wants to be. “Everyone asks me why I don’t move my production to Nicaragua and Honduras, but I don’t want to expand too much,” she explains. “I’ve had a lot of offers to join partnerships, or from silent investors, but I want to be on my own. Also, my parents are old and I can’t move them over there.”

Staying small means staying in control, according to Cobas. “I have the privilege to do things my way and the way my customers want to do it. I like the wrapper to be shiny, for instance, not spotty or with veins, and I like the triple cap. The good thing with that is that the cigar doesn’t unravel when you cut it. It’s like putting three seams on a pair of pants. I also like buying from small farms, because if you use tobacco from the same land it’s going to taste the same. If you jump from producer to producer it’s going to throw off the blends, and since I’m small I can stick to the same place. You have all the control.” 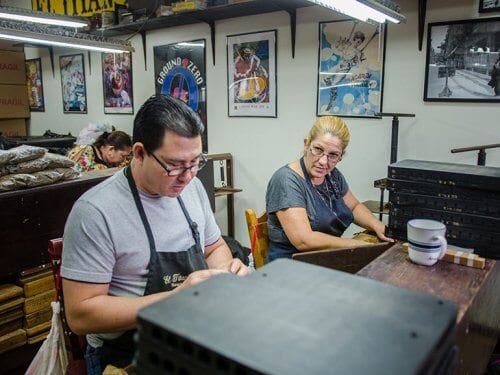 Another story worth telling is that of her star roller, 66-year-old María Sierra, who came from Cuba five years ago and, due to merits, instantly got a job at El Titan. “Her daughter called me up and said that her mom was coming to Miami and wanted a job. I asked her where she’d worked in Cuba and she said El Laguito, the famous factory in Havana that only produced cigars for Fidel Castro. ‘Are you kidding? Tell her that she has a job!’ I said.”

María Sierra was one of 30 female rollers to be chosen from hundreds when Fidel Castro’s indispensable helper, Celia Sánchez, decided it was time for women to get into the business.

“Back then, women were housewives and home-makers,” says Cobas. “They didn’t work. María was 18 years old then, and worked there for 31 years.” Her fame is well known in the cigar world. Of the first 30 girls, María is one of the few who still alive, and her cigars sell instantly.

“They’re sold before they hit the shelves, more or less,” Cobas tells me. “People come in and ask if María’s here. A guy from Seattle, in Florida for business, drove down from Sarasota to get his boxes signed by María. He had bought one box of every cigar she’d made, and he was so excited.”

In fact, the boxes were already signed, in a way. At El Titan, rollers and bunchers don’t work in pairs as they do in Central America and the Dominican Republic. They work according to Cuban tradition, where each roller is responsible for his or her own cigar, from beginning to end. When a box is done, the roller’s name is put on the bottom. “That way, the rollers feel a greater responsibility and pride for each stick, and customers love knowing who made their cigars.” 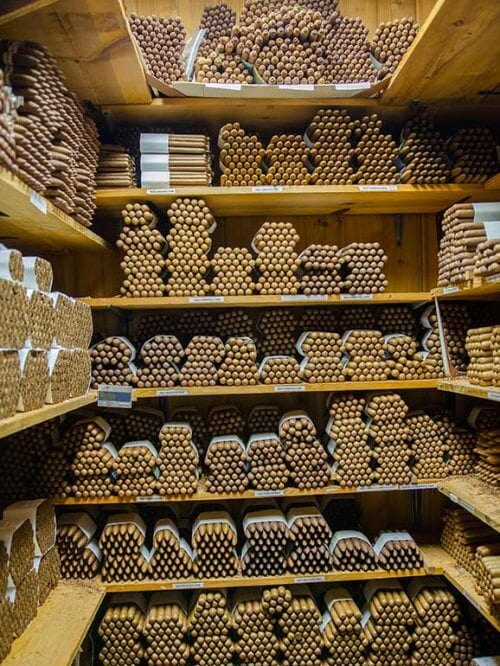 There are five different Titan cigars, Redemption Maduro, Redemption Sun Grown Habano, Grand Reserve Maduro, Gold, and My Way. They are only sold at Cobas’ store. “I don’t do cigar stores anymore,” she says. “They sell the cigars I produce for other companies, but not mine. I can’t commit to both. I can’t produce enough for them to be happy, and I’m committed to the ones I do manufacture for.”

Of the five cigars, My Way is the only blend Sandy came up with herself. The rest were done by her son-in-law, Willy Ferrera. “He had such a great palate that Jonathan Drew from Drew Estate offered him a job. He was a great blender and when he left he was worried how I’d get on without him. So was Jonathan. So I decided I was going to create a cigar, my way.”

Sandy Cobas also makes cigars for a number of different companies, like La Palina, Warped Cigars, Chinnock Cellars Cigars, Bonita Smoke Shop, Padilla, and many more. In addition, she makes some that are liquor flavored.

“We put a couple of cigars in a Tupperware box and cover them in tobacco leaves that we spray with different types of liquor, like Macallan, Rémy Martin and Louis XIII cognac. These we do for Atlantic City Cigars and the owner sells them for $100 a stick.”

So, to round off the story of El Titan, here’s another captivating subplot, suitably enough involving both liquor and tobacco. Sandy is making a cigar with Scottish whisky for 1880 International, owned and run by Andrew Brice. “The owner’s grandfather was a hard-working man from Detroit who went bankrupt,” she tells me. “But he then invented an undercoat [rust-proof protection for vehicles] and became a millionaire.” His children convinced him to travel, and he went to Europe. In Scotland he visited a distillery and bought several barrels of whisky, which he never received. As these barrels were never claimed, after the inventor’s death, his relatives found the receipts of the order. Some forty years later, the barrels of liquor were retrieved by the grandchildren through a lawsuit. “They asked me if I could make a cigar with it,” Sandy Cobas concludes. “It’s called 1880 Family Reserve.” 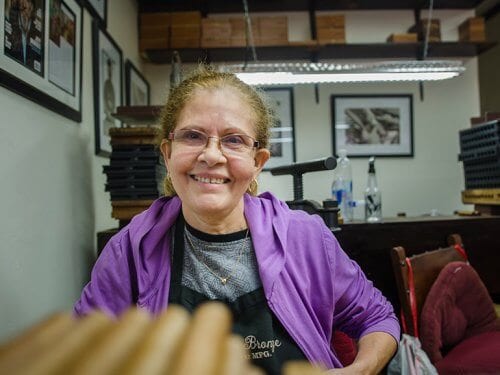