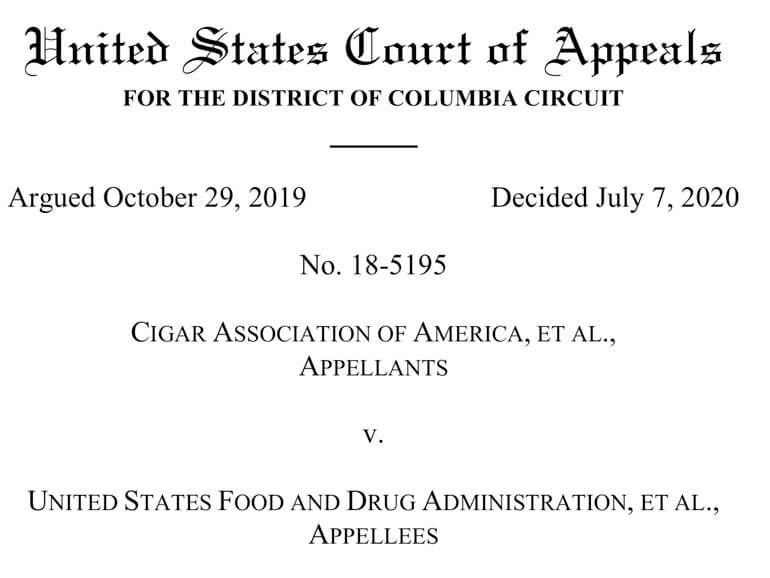 In 2016, FDA decided to regulate cigars and require massive health warning labels on all cigar products.  Due to ongoing litigation, the warning label requirement has not yet taken effect.  Today, the U.S. Court of Appeals for the D.C. Circuit struck down FDA warning labels for all cigars, declaring that they are “arbitrary and capricious.”

In their opinion linked below, a panel of three appellate judges noted that FDA’s proposed cigar warnings are four times the size as existing health warnings and would cost the cigar industry $100 million to implement.  In explaining their decision, the judges noted that “FDA candidly acknowledged that ‘[r]eliable evidence on the impacts of warning labels … on users of cigars [and] pipe tobacco … does not, to our knowledge, exist.’”  Because FDA provided an insufficient scientific basis for requiring warning labels on cigars, the three judges unanimously decided to reverse a 2018 decision by the U.S. District Court for the District of Columbia upholding the warning labels.

“We have long believed that there is no legal or scientific basis for FDA to regulate premium cigars like cigarettes,” said Drew Newman, general counsel of J.C. Newman Cigar Co., America’s oldest family-owned premium cigar company. “Today, the U.S. Court of Appeals for the D.C. Circuit agreed, concluding that FDA ‘acted arbitrarily and capriciously’ in deciding to require massive new warning labels on cigars.  Today’s decision also raises serious questions about the legality of health testing, premarket review, and other costly and onerous requirements of FDA regulation.  In light of today’s decision, we hope that the courts and FDA will reconsider the regulation of premium cigars altogether.  As an industry of small, family-owned businesses that handcraft natural products in small batches, regulating premium cigars like cigarettes simply does not make sense.”

On July 22, the cigar industry will present its case challenging FDA regulation in its entirety before Judge Amit P. Mehta of the U.S. District Court for the District of Columbia.