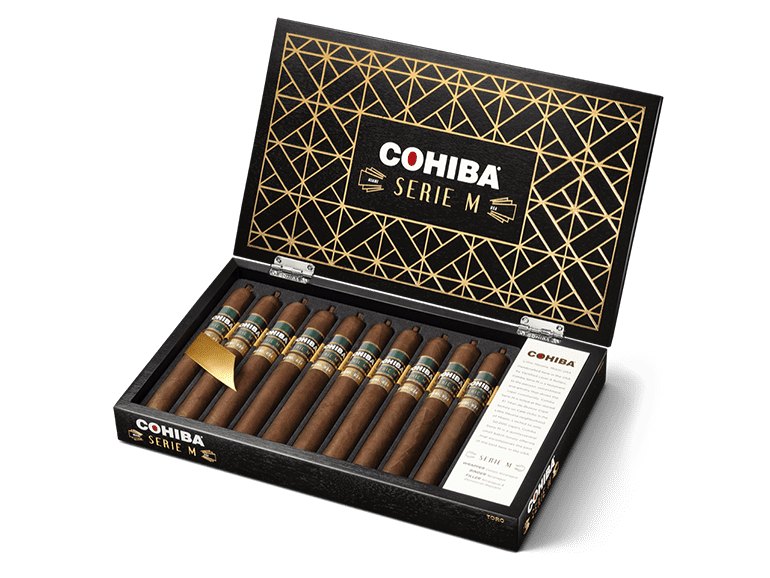 Cohiba is launching the Cohiba Serie M, the first collection of Cohiba to be handcrafted in the U.S. for sale in the U.S.

General Cigar’s Cohiba Serie M is the result of a collaboration with the family-owned El Titán de Bronze cigar factory in Miami’s Little Havana district. The limited edition collection is crafted by Cuban expatriate cigarmakers. This collection will be available through cigar shops across the U.S. starting on April 12. Only 5,000 boxes have been made.

Cohiba Brand Ambassador Sean Williams said, “Cohiba Serie M has been a passion project for all of us on the Cohiba team. To take a brand as iconic as Cohiba and make a cigar in the U.S. in collaboration with a boutique, family-owned factory has been an honor for all of us. Serie M gives a nod to our long-standing commitment to craftsmanship, our focus on innovation and alludes to the exciting releases that we are planning in the future.”

Sandy Cobas, owner of El Titán de Bronze said, “I am honored that we were chosen to craft the first American-made Cohiba cigars. Unlike in other countries where cigar makers work in teams, our cigarmakers at El Titán de Bronze personally create each cigar from start to finish, and we put their name on every single box they make. Our team of rollers have achieved the highest skill level that a cigarmaker can achieve, with only a select few having the dexterity and artistry required to meet our stringent qualifications. Every cigar represents the very best of each of our rollers and is an opportunity for us to share their artistry with the entire country. The buzz for Cohiba Serie M is building in Miami and based on what I’m seeing, these cigars will sell out as soon as they hit the cigar shops.”

Crafted according to old-world techniques and featuring a double binder, closed foot and triple cap with a signature fan, Cohiba Serie M is a medium-to-full-bodied cigar of depth and character. Made with exquisite, aged tobaccos, the cigar is enveloped in a lustrous Nicaraguan Corojo wrapper, a first for Cohiba. The binder is Nicaraguan and the blend features hand-selected Nicaraguan Jalapa and Estelí and Dominican Piloto Cubano tobaccos.