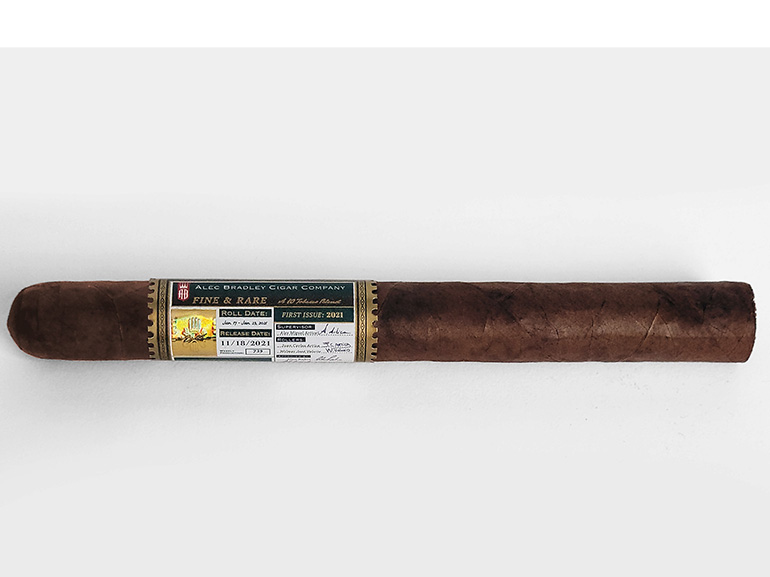 Alec Bradley Cigar Co. are now shipping US allotments of Fine & Rare BC-(13)4EV. Originally scheduled to arrive to appointed tobacconists in November 2021, packaging for this Fine & Rare release was affected by supply chain issues plaguing the cigar industry. Containing eleven cigars to celebrate the 11th iteration of the project, only 2500 Fine & Rare BC-(13)4EV collectable sets were created for global distribution. Ship dates to international accounts are unavailable at this time.

For this special release, Alec Bradley founder, Alan Rubin blended BC-(13)4EV, a first of its kind 7 x 50 ring-gauge, Churchill. As well, he created the BC-(13)-4EV-B, an undisclosed “very special” vitola presented in its own coffin within the collectable set. Although the blends and shapes are different, both cigars showcase 10 distinct tobaccos, a defining characteristic of the Fine & Rare project. As is tradition, both ultra-premium cigars feature an exclusive estate grown wrapper from Trojes, Honduras set atop a blend of rare binder and filler leaves from Nicaragua and Honduras. Each of the 2500 Fine & Rare sets contain ten BC-(13)4EV cigars and a singular BC-(13)4EV-B cigar. Mr. Rubin noted that Alec Bradley will not be the first to identify the size and shape of the “very special” BC-(13)4EV-B, as he wants tobacconists and enthusiasts to reveal and experience the cigar firsthand.

First released in 2011, Fine & Rare is an iterative project Mr. Rubin created to push the boundaries of cigar blending. To achieve extraordinary complexity, flavor and balance, each version of Fine & Rare contains 10 unique tobaccos, an amount more than any other blend in the world. Only 25000 BC-(13)4EV cigars were constructed for this release by the same singular pair of master rollers who have ever been entrusted to the Fine & Rare project. Presented in collectable high-gloss, two-tone blue box sets, Alec Bradley is urging tobacconists to sell the entire 11 cigar experience as a single unit.

MSRP has been set to USD 260.00 per box, before any applicable taxes.
Fine & Rare is produced at Fabrica De Tobacos Raices Cubanas – Danlí, Honduras.