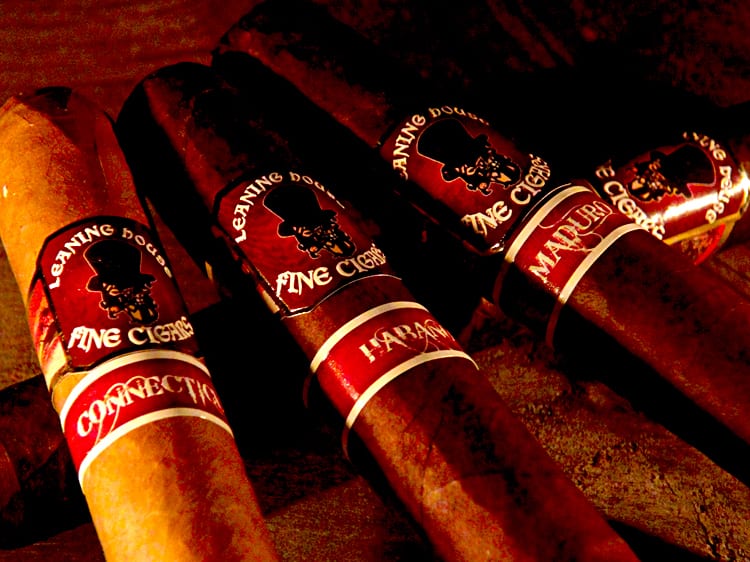 Leaning House Fine Cigars – after a successful local launch in October – opens up online sales for a national rollout of its four handcrafted Nicaraguan cigar blends.

Back in February, after he sampled a wide selection of blends, Founder Dave Puskavich chose four blends to be used for the Leaning House Inaugural Cigars.

In March, as the country shut down Puskavich and new partners Kerra Penn and Pat Ulie (aka the 3 Stogies) had a decision to make. Feeling hopeful, a unanimous decision was made to move forward. Despite some delays, on October 19th Puskavich and Penn went to the airport to pick up the first shipment of cigars just 6 days before the official Pittsburgh launch to be held at an off-site winery.

Leaning House is the house cigar of Leaning House Fine Cigars, a cigar lounge in Southwestern Pennsylvania, founded by Dave Puskavich in 2006. Puskavich, a lover of all things unique, opened his shop offering “Antiques, Collectibles and Fine Cigars”. Later, he transformed the collectibles shop into a cigar lounge. That is when his well-honed curation skills could shine as a Tobacconist, masterfully sourcing boutique and limited edition cigars. When the lounge opened, it was 1 of only 7 cigar shops in the Pittsburgh area. Now there are likely over 25. Luckily the strong relationships Leaning House formed early with the boutique brands paid off for this pioneer. That is why despite its rather off-the-beaten-path location – about 50 minutes from Pittsburgh – visitors from around the globe somehow find this lounge. Wanting to expand, Puskavich teamed up with partners (fiance) Kerra Penn and Pat Ulie in early 2020 to form 3 Stogies. The goal: To bring the “Coolest Cigar Shop in the Universe” to the world. 3 Stogies, operating under the Leaning House brand, has done this by creating an e-commerce website, opening a second location, expanding its live music events and launching its own Leaning House Cigar. Next up, Leaning House Waikiki (aka “The Coolest Cigar Shop in the Pacific”) in early 2021.