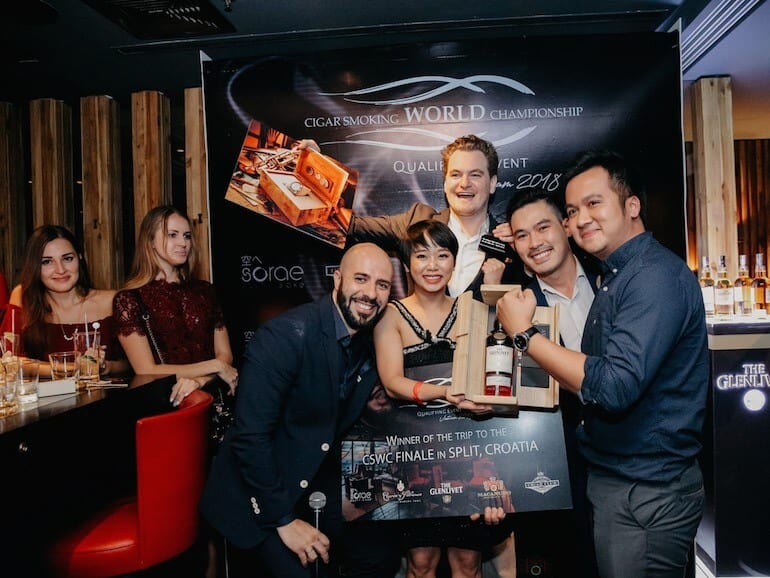 The second Asian qualification round of the Cigar Smoking World Championship for 2018 was held on Friday evening at Saigon Cigar Club in Vietnam. 20 competitors and a large group of spectators filled the club. It was standing room only to applaud the final three competitors, with Ms Luong Phan claiming victory with a time of 1.30.23.

Although fifteen minutes separated first and second place, Ms Camy Fayet finish second with a time of 1.14.58 and Lam Bui come third at 1.04.12. A delegation of three Russian competitors from the Russian Cigar Club also took part. Ivan Munteanu’s time of 1.32.32 was the best of the visitors.

Prizes on offer included a trip to the Cigar Smoking World Championship final in Split, Croatia, a Cuervo y Sobrinos watch, boxes of Macanudo Inspirado, and a bottle of Glenlivet XXV.

“This was first time we have conducted the event in Vietnam and the interest is mind-blowing,” said CSWC Founder Mark Bilic. “Saigon Cigar Club is the perfect venue for the competition and a big thank you to everyone who attended – it was a great party and celebration of cigars.”

“It was our absolute pleasure to host the first Cigar World Smoking Championship in Vietnam at Saigon Cigar Club,” said Timen Swijtink. “We’re very grateful that Marko chose our club to host the event in Vietnam and we want to work with him in the future. We’re also grateful for Cigar Journal’s coverage of the event as well.”