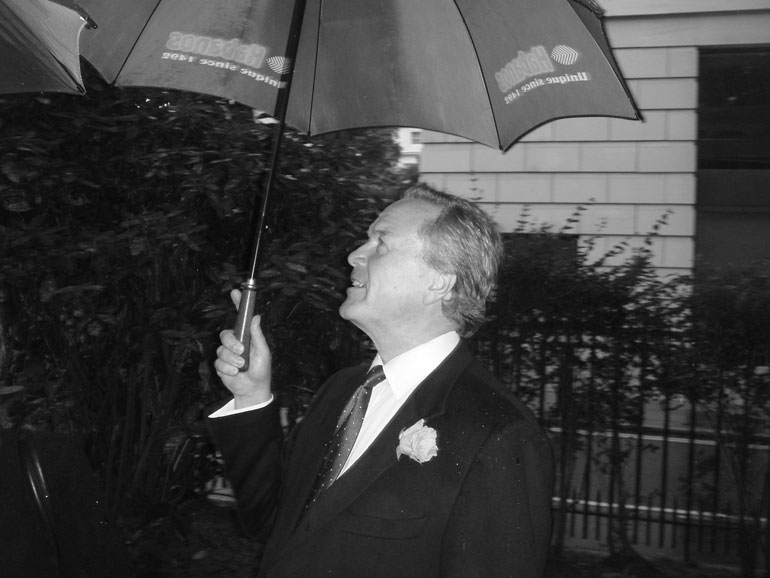 Some might say that John was a natural for the cigar industry; he was a bon viveur who loved to be around people, and people loved to be around him. Following a suitably long lunch at the Ritz with the late chairman of his prospective employer in 1984, John joined Davidoff’s UK Cuban Cigar distributor, Anglo Havana Cigar Company Limited which at the time which was a subsidiary of Hunters & Frankau, as managing director. He promoted their cigars to specialist tobacconists and 5-star hotels, taking over this role from Simon Chase.

The following year he was appointed Sales Director of Hunters & Frankau and he carried out both roles until Hunters & Frankau was appointed the exclusive distributor for Habanos S.A. (Cubatabaco as it was then) in 1990. John remained in the role of Sales Director of Hunters & Frankau until March 2009. During this time, John was also instrumental in expanding a nationwide sales force as the company amalgamated the businesses of Knight Brothers and Joseph Samuel in the early nineties. John developed not only Havana cigar sales but also those of Macanudo, Santa Damiana, Agio and Villiger. He also worked closely with Hine to develop & launch the Hine Cigar Reserve Cognac which is still available today.

Jemma Freeman, Chairman of Hunters & Frankau said “there was a wonderful sense of loyalty between John and his team, and he was a very good advocate for the challenges of their roles and for their successes. It is often mentioned how he looked after them in the good times and the bad, and the fun they had together. John was an extremely popular member of the team at Hunters & Frankau and of the wider trade, with his easy manner and gentle humour he was welcomed by all and spent considerable time visiting accounts all over the country. He built close friendships with customers and many of those friendships have continued to this day. John was also an excellent dry fly fisherman. He was an expert entomologist and a beautiful caster of the dry fly, he spent many years fishing on the Chilbolton beats on the River Test where he made many friends. Further afield on several occasions he joined his friend and past Chairman of Hunters & Frankau, David Lewis, at his family home in Scotland where they fished together on the Spey and the Stinchar rivers. His passing is a great loss, and our thoughts are with his wife and family at this time.”

His clients fast became friends; Edward Sahakian, proprietor of Davidoff of London on St. James´ Street said “I have had the privilege of knowing John for nearly forty years. We first met in 1984 when he joined Hunters & Frankau to run the Davidoff Agency and because of our almost daily contact we became very good friends and shared many trips to Cuba and the USA along with my other very dear friend, Desmond Sautter. Our trips to Cuba were always memorable as John was an excellent host, guide, and a witty and charming companion. I treasure the fond memories of our times together. I knew John socially as well as in business and we would meet both in London and in Nice with my wife, Greta and his wife, Belinda. And it was Belinda with whom, in John’s own words, he spent the happiest years of his life. John was a wonderful advertisement for the cigar trade. He was a genial, knowledgeable, and popular figure and a loyal friend. He will always be in our minds and hearts and will be very much missed by us all.”

Mitchell Orchant, who developed UK internet cigar sales and started C.Gars Ltd met John in the mid 1990’s. “I was fortunate to have his guidance throughout my career in the cigar industry. I will always remember the wonderful trips to Havana and chatting with John at the gala Festivals. John was straight talking, witty and fun to work with; truly one of the good guys in our trade who I will dearly miss. My sincere condolences to Belinda and the family.”

John understood that the cigar industry was about having fun and caring about customers as well as doing business. Michelle Adler from C.Gars Ltd said “I was always looking forward to seeing John and having a chat about cigars, dogs, and life in general. I remember once, many years back, we snuck out of a cigar launch party and went for a dinner instead. One of the most memorable evenings and laughs I have ever had!”

Following his distinguished career selling Cuban cigars, John ventured into the new world side of the business in 2010, developing the Regius brand of handmade cigars with Akhil Kapacee. The brand grew exponentially with John taking responsibility for UK sales; it is now one of the most recognised brands in the UK with a solid presence internationally.

Akhil Kapacee, director of the Regius Cigar Company said “John was a true gentleman. He epitomised the cigar business: charismatic yet humble, John was integral to the company`s success. He was one of the very best salesmen I have ever had. Personally, I found him to be entertaining, interesting and always happy to share his experiences. From the first meeting to the last glass of wine we shared 3 weeks before he passed away, he was always on good form. We came a long way together and he really gave meaning to the words `business is personal`. A true professional, he was someone who prided himself on his relationships and doing business the right way. He will be missed.”

A colourful character in the cigar industry, John enjoyed fly fishing on the River Test, and shooting in Yorkshire. He leaves behind his wife Belinda, daughter Maddie, son Max, son Pierre and 6 grandchildren. He passed away aged 71 on Friday 5th August 2022.