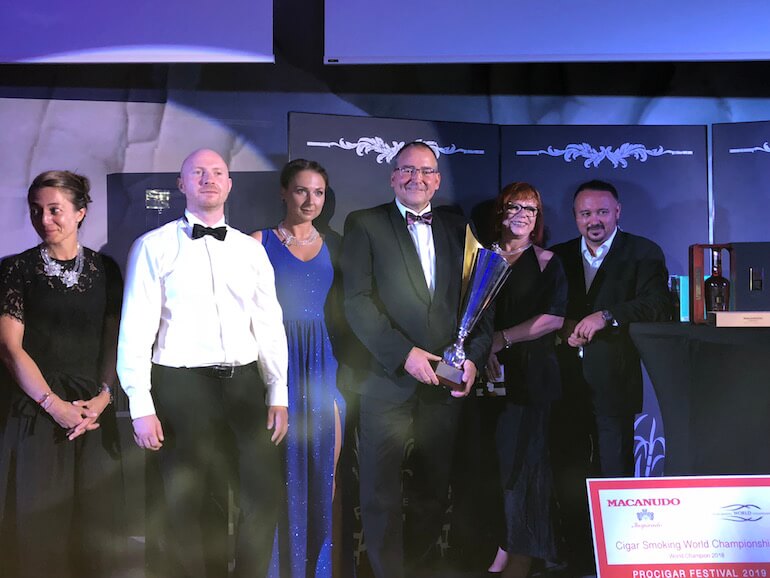 For the first time, a contestant from Germany won the Cigar Smoking World Championship (CSWC). Hauke Walter, a member of the German Club Aelteres Tabaks Collegium Heddesdorf 1870 and currently number five in the world’s Top 20 list finished his Macanudo Inspirado after 168 minutes and 5 seconds at the 2018 CSWC finals. Runner-up was Alexander Shagai from St. Petersburg Horse Power Cigar Club. Shagai is the only double world champion (2013+2017) and had to put down his cigar only a few seconds earlier than the winner (167:52 minutes). Tomasz Żołądkiewicz from Poland finished third with 147:49 minutes. In 2017, Żołądkiewicz was the first one to ever exceed the magic 180-minute line and is currently listed as number four in the world’s Top 20 list.

The prize for the slowest female smoker also went to Germany. Patricia Benden from Dusseldorf finished after 133:11 minutes. Agata Piotrowska from Poland took 95:15 minutes to finish her cigar and Martina Kleinlagel from Germany won third place with 95:09 minutes. The three ladies are all listed in the current Top 20 list.

128 contestants from 28 countries participated in the ninth edition of the Cigar Smoking World Championship on September 1, 2018 in Split/Croatia. Among them were the 27 winners of the official national qualification tournaments that took place during the past 12 months throughout the world.