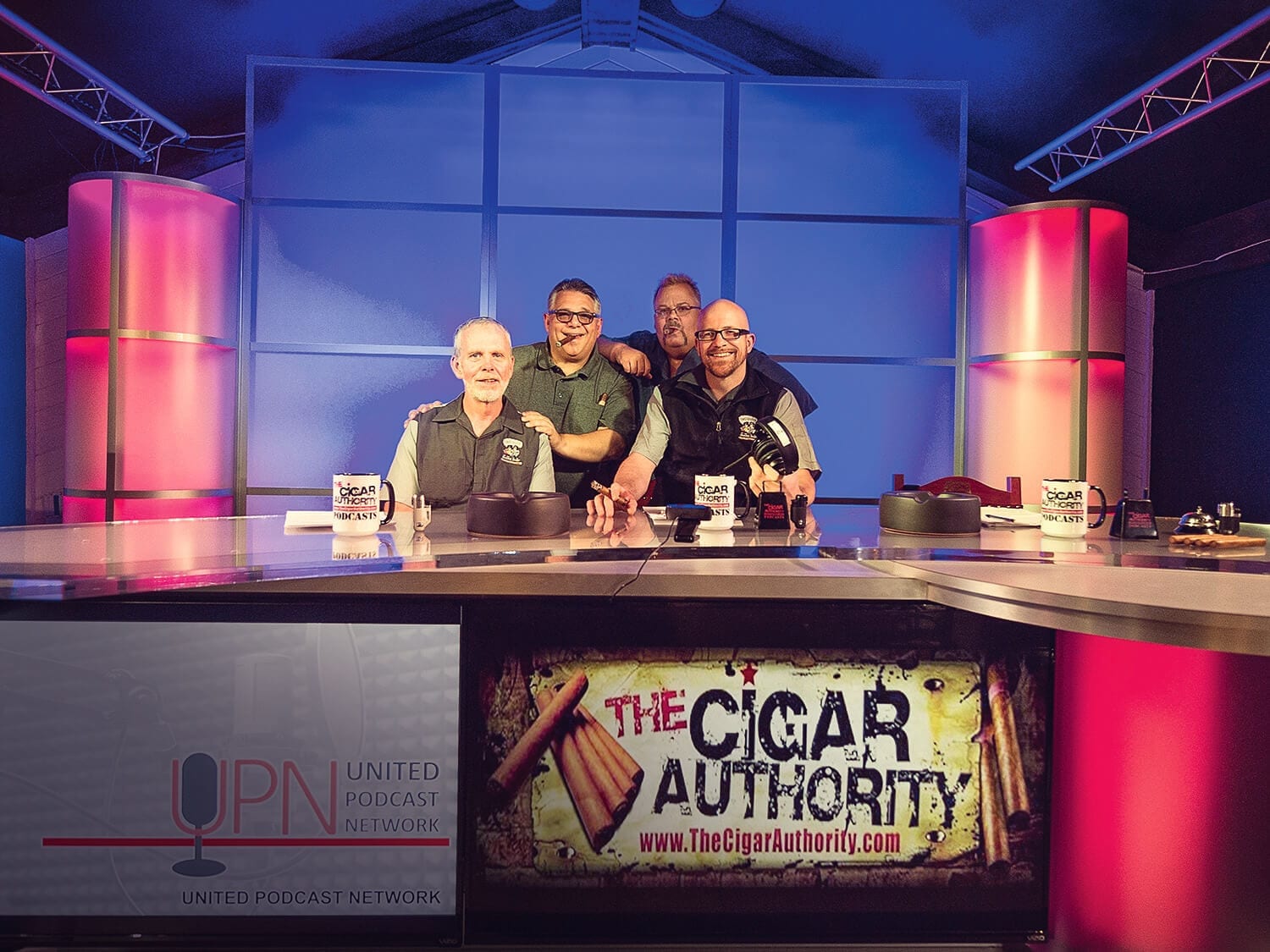 Would you eat a stick of butter for 50 dollars?” It might not be a question you would anticipate on a podcast about cigars. Then again, if you’ve ever watched or listened to The Cigar Authority, it’s probably exactly what you would expect.

As I’m invited to sit next to the podcast founder and owner of Two Guys Smoke Shops in New Hampshire, Dave Garofalo and co-anchors, Barry Stein, Jonathan Barbeau (who goes by his DJ name, Mr. Jonathan) and Ed Sullivan, I’m prepared to talk about anything. Dave had compared their show to one of the most famous sitcoms ever. “You know on Seinfeld, they say it’s a show about nothing,” he says. “Well, this is a show about nothing … and cigars.”

Two hours earlier, I’d arrived at the Two Guys Smoke Shop location in Salem, New Hampshire. Dave Garofalo started his business more than three decades ago and today has three top-notch shops in the south part of the state. The two-hour show is broadcast from his professional studio on the second floor of the cigar shop, at least when it’s not shot at a special location, like a Connecticut tobacco field, or Barry Stein’s wedding party, or the IPCPR trade show. With eight-plus years on the air, The Cigar Authority is the longest-, continuously running cigar podcast. “As a 50-year-old guy I wasn’t that much into social media, but I read it was attracting customers and becoming an authority on a subject. So, there was the name, right off the bat.” He started by setting up a Facebook and Twitter account before he met a DJ named Mr. Jonathan. “He came into the store and told me he had a podcast I should listen to. I thought that was amazing, so I asked him if he wanted to do one on cigars. Being 50, I saw Johnny Carson in front of me. I wanted to talk cigars, do interviews and reviews.” Jonathan was to produce the show and Dave brought in his friend and customer Tommy Grella, who had been on the TV show Food Network Star. “I also wanted a funnyman to bounce things off, so we hired a nightclub comedian, but he only lasted one show since he thought he knew more about cigars than he did.” So for the second show Jonathan joined instead.

At this point it was all audio; they tried bringing on customers and retailers, but most of them froze when the microphone was turned on. Then they introduced a phone line, which only resulted in people trying to promote their own businesses. “So, we thought we’d go to people who were really passionate about cigars, like bloggers. But again, the same thing. They could write, but not talk, with very few exceptions.” One of those was Barry Stein. “He was able to bust balls when he was on, which is what we wanted,” Dave tells me. “It came naturally to me, since I’m from New York and these guys are from Boston,” Barry says. “There’s a rivalry there, so we ended up mostly talking about the [baseball teams] Boston Red Sox versus the New York Yankees.” 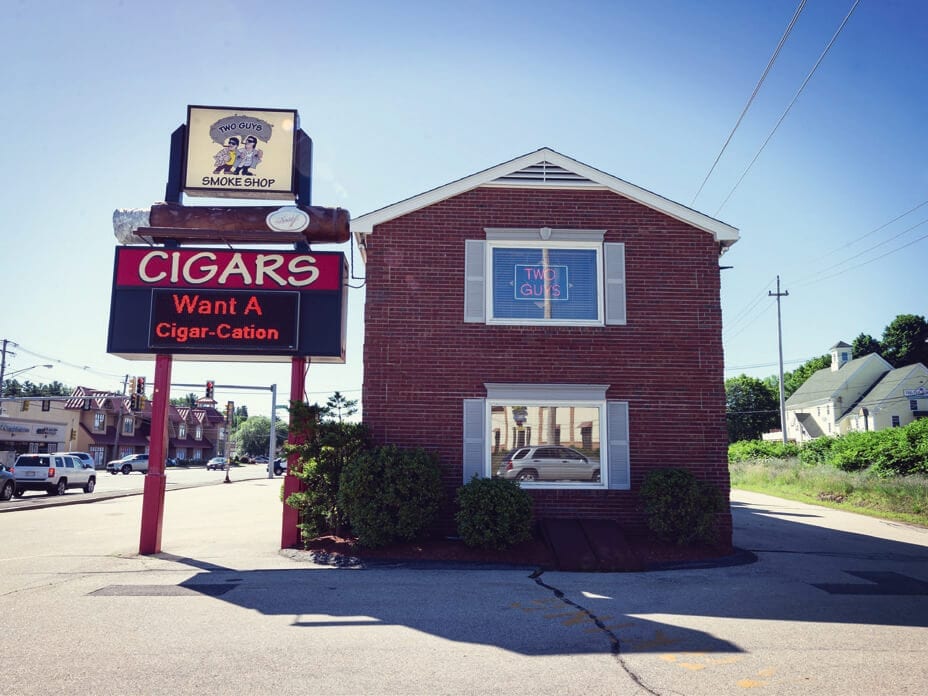 The Cigar Authority professional studio on the first floor of the shop in Salem | Photo: Micah Gummel

Since 2011, The Cigar Authority has also been visual. Co-hosts came and left. Today, Dave, Barry, Mr. Jonathan, and Ed make up the team.

“As you can see, Barry and I love food,” Dave says, rubbing his belly. “And you often use food analogies when describing a cigar, so we’d sometimes compare the taste to, for instance, putting butter on a pop tart.” But Jonathan is the opposite; he eats health food, is almost a vegan and doesn’t want to hear comparisons between cigars and Twinkies. “Our listeners get a kick out of this,” Barry continues,” so nowadays they send us snacks. We don’t even have to buy them ourselves. It drives Jonathan crazy.” The only preparation the team does for the show is a quick glance through some notes just before the show. The producer goes “Check, check, check” into the microphones and then they’re on air.

The theme of the day is unicorn cigars – cigars already produced that may or may not exist because of the new FDA rules. Half an hour into the show, I’m invited up and we discuss everything from my work to dreadlocks, coffee cakes, the age of Crocodile Dundee star Paul Hogan and how we Swedes celebrate Fat Tuesday.

The relaxed atmosphere and ball busting is probably why the show had 1.5 million downloads last year, and that’s not including the people watching on Facebook Live. Dave and his men have indeed become cigar authorities. “It’s mind boggling,” Barry tells me. “There are people in South Korea who want to listen to us for two hours. Sometimes I don’t even want to do that. There’s also a cigar shop in Thailand that has Cigar Authority Wednesdays.” Because the show has been on every Saturday for more than eight years and now reaches people in 80 countries, Cigar Journal magazine awarded The Cigar Authority the Cigar Ambassador 2016 Cigar Trophy. They even attract fans outside the cigar world. Dave tells me about his dry cleaner, who saw his license plate one day, which reads “cigar.”

“He said I sounded like the guy on the radio talking about cigars. ‘I am that guy!’ I told him, and went to my car to get him three cigars. It turned out he didn’t smoke cigars, but he never misses the show. He just found it very entertaining.” So, what about the butter challenge – “Would you eat a stick of butter for 50 dollars?” Some fans, including Barry’s wife, are in the studio audience; they all laugh when Jonathan seems offended by the butter proposal.

“I most definitely would not!” he says emphatically. “It’s so much fat that you have to flush through.” The other hosts and I all say yes, some of us hesitating a little, and Jonathan’s disgust increases.

Finally, Dave caves in as well: “Give me six crackers and I’d do it for 50 dollars! I’d divide the butter into three pieces and put them between two crackers.” “You mean you’d do little butter sandwiches?” Jonathan asks with a contorted face. “Yes!” “That might be the most disturbing image I’ve ever imagined,” is Jonathan’s final comment on the matter. 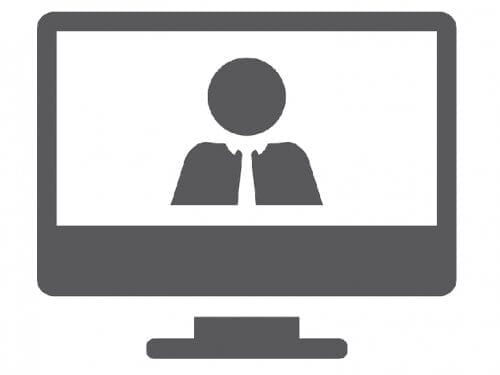 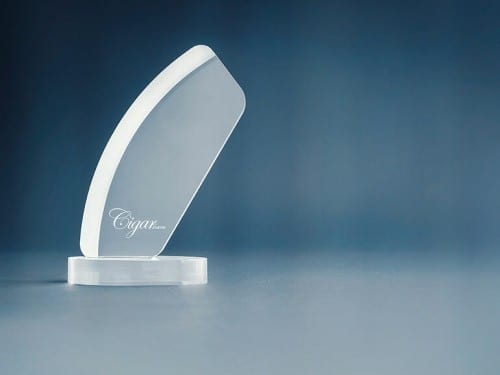