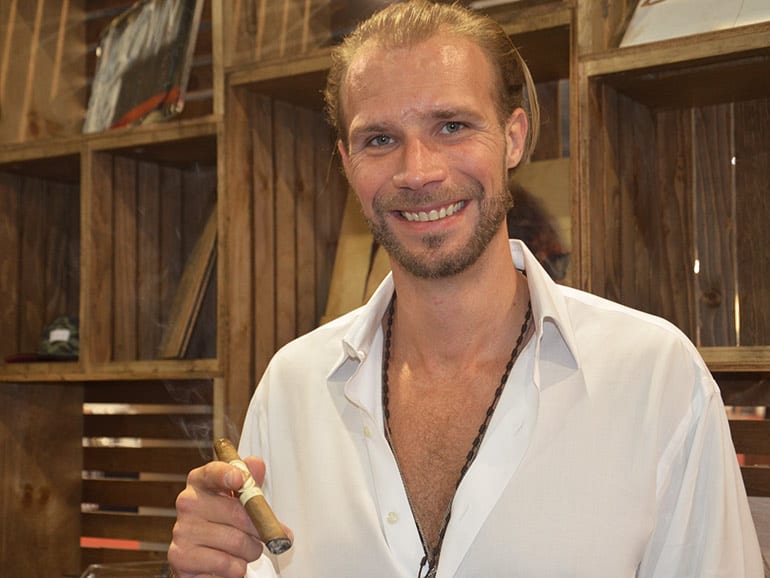 The man who has been shaking up the cigar industry has chosen to focus on subtle, contemporary marketing directed at the European market. We met the American in France, where, in the meantime, three of his products are being marketed: The King is Dead, Long Live the King and Eastern Standard.

You have been focusing on Europe. What benefits do you expect?

ROBERT CALDWELL: I have Nordic roots on my mother’s side. The logo for my brand Eastern Standard is an image of a bearded man for whom I invented a name and history: Hans Nielsen Lahkso of Finland, who after suffering shipwreck and other adventures went to Cuba and finally to the Dominican Republic. Besides that, I think that consumers have had enough of enormous sizes and overpowering blends. My cigars are available in modest sizes, are round, and that’s in keeping with European preferences, especially those of the Nordic countries. For another thing, my cigars are not part of the “guns, motorcycles and tattoos” style. My marketing is more subtle, and I think that makes it easier for European consumers to appreciate our cigars.

What countries did you target first?

Sweden, first of all, which was actually quite recent. I met the Swedish distributor last year in Dortmund. We started distribution there and had to restock after only six weeks. Then came Denmark, Norway, Belgium, Luxembourg and Switzerland. Since last summer we have also been distributing to Macedonia, Bulgaria, Albania, Kosovo, Russia, Ukraine and Romania, and the response has greatly exceeded our expectations. Today, without even including Germany, France and Spain, where we are just getting started, 20 percent of my sales are in Europe. I’ve made sure that I have what I need to do it right. This year I’ve come to Europe just about every month.

Have your blends had the same reception in the United States?

There are some small differences. In contrast to the Eastern Standard − the lightest of my cigars − the formats sold in the United States are mild to medium. In other words, it’s a breakfast cigar! In Norway the same cigar is considered quite powerful.

Have you always worked in the cigar industry?

I started eight or nine years ago, working for a company that sold cigars to restaurants, bars and hotels. Some of the clients wanted cigars that were really exclusive, so I approached a few producers about creating special blends. Gradually, I have learned to taste everything and keep my eye on the market.

And what lessons have you learned about creating cigars?

Regardless of your social station, in the United States today you have to drink craft beer and buy exceptional chocolate and coffee that has been roasted in small batches. And the trends are all shared by word of mouth: “If you like that beer, you’ll probably like this special little chocolate brand.” My idea was to base the development of my cigars on the same proposition: do something that is both classic and contemporary at the same time and unconnected to large companies or famous families. I think that approach is far more subtle than anything you would have found in this industry 20 years ago.

Where are your cigars made?

At the Tabacalera Ventura in the Dominican Republic. The Ventura family has been working in the cigar industry for three decades. The paterfamilias, Willy Ventura, was the right-hand man of Zino Davidoff for many years. We did pose a problem for them: they were making about 300,000 cigars a year, and we ordered 500,000 cigars in the first six months! They were a little behind the times, but today, after their expansion, they have three times as much space, and they’re making 600,000 cigars a year for us.

This interview is apparently the first you’ve ever given a magazine (Note: Summer 2016). Hard to believe!

It’s true, all the same. In the US there are so many magazines, so many bloggers. The American public is aware of my products, at least to some extent. Why should I bother? ‘Robert Caldwell was unavailable for a response,’ is what you’ll read on a lot of Internet sites [laughs]. It’s different with the Cigar Journal. I know that there are not that many cigar publications in Europe and that yours this highly respected, so it’s an honor to answer your questions. 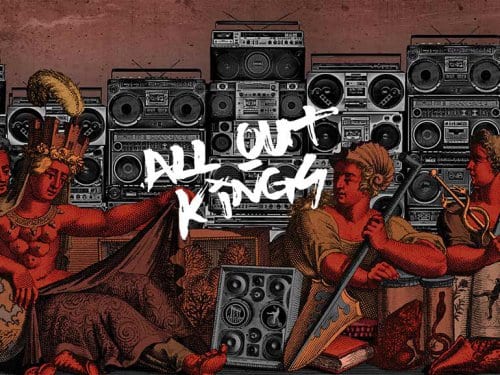