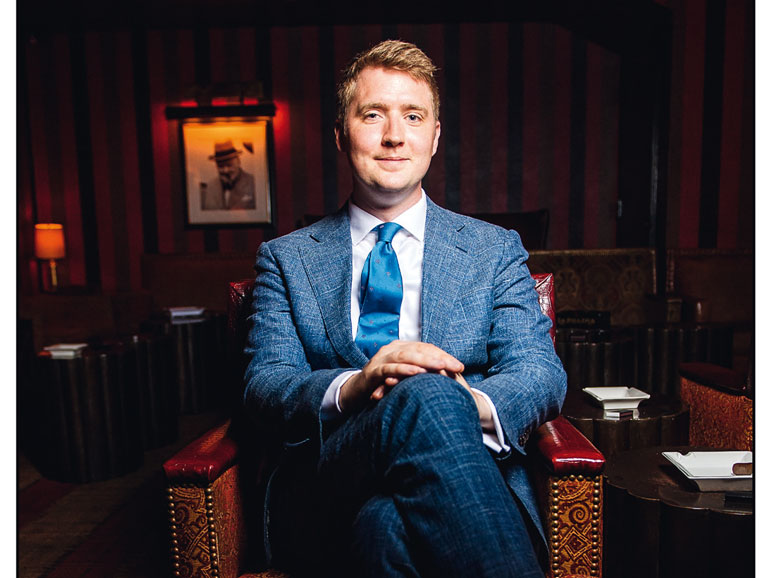 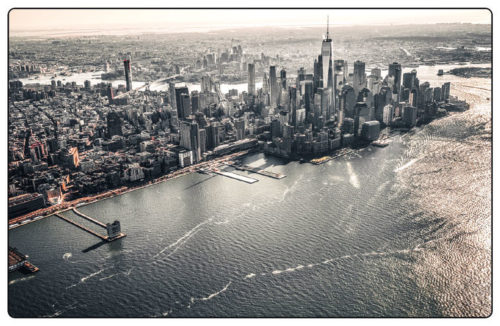 In the past couple of years, some of New York’s notable cigar lounges and bars have closed down. Despite this, more and more people are getting into cigars, at least according to Matthias Clock, founder of Fine Tobacco NYC and member of the Cigar Journal tasting panel. “The fact that we’ve been able to organize events for 5,000-plus people in the past eight years indicates that there’s a strong community,” he tells me. Clock has been in the business since 2010 and has agreed to show me around the city’s cigar spots. First up is Nat Sherman’s beautiful townhouse right next to Grand Central Station on 42nd Street. “The main reason I chose this place is because of its selection. They carry brands large and small, and undoubtedly have the biggest selection of OpusX.” “The genesis of that is a charity event we had with Fuente in May of last year,” sales associate Adam Panarella adds. “They brought in more or less everything that’s rare.” “The other reason they make my list is their pricing,” continues Matthias. “Michael Herklots [vice president at Nat Sherman] not only understands the cigar business, but while other places may jack up their prices, Nat Sherman knows what their customers need.” The interior is beautiful and rustic with a high ceiling. In between the counters, a couple of armchairs and tables are set up, but it’s not really a smoking place. “You can smoke here, but it’s not a lounge,” Panarella explains. “We’re a full luxury retailer and tobacconist. We do, however, have the Johnson club room downstairs, for members only. Johnson was Nat Sherman’s nickname for his wife, by the way.” “I’d say it’s a cross between a lounge and a shop,” says Clock. “If someone asks me where they can sit down and smoke a well-priced cigar, I point them here.”

We walk through a busy Midtown as the sun is setting behind the towering high rises around us. The sidewalks are packed with people on their way home after a day’s 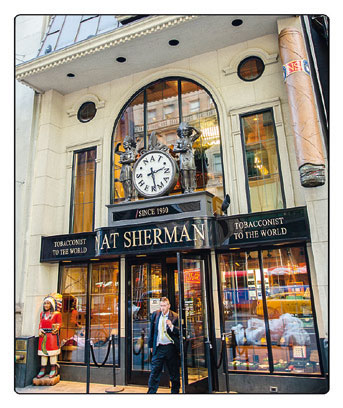 work as we make our way up Madison Avenue to one of three Davidoff locations in the city. Besides an extensive Davidoff selection, the Madison Avenue location tends to offer a lot of exclusive cigars, as well as an unparalleled air ventilation system in the lounge. “We receive a lot of high-end cigars, not only Davidoffs, but also other brands,” sales professional Alejandro Ceballos tells me. “And our lounge has great ventilation. While people might complain about reeking after having visited other spots, our lounge can be packed, and you won’t even notice it.” “I can vouch for that,” says Matthias. “The lounge is also very quiet, which is a big contrast to Nat Sherman where people sometimes yell across the room. That doesn’t happen here, and having a quiet place to go to when living in a noisy city is very nice. Also, a lot of celebrities hang out here. Al Sharpton is one.” Another contrast is the decor. While Nat Sherman is very much old school, New York, Davidoff has a more modern and European vibe. As darkness falls, we take a walk to the nighttime spots. First up is the Carnegie Club, a glimpse into 1920s New York. With the red- and-black-striped wallpaper, dim light, book shelves, leather furniture and pictures of celebrities smoking cigars it’s not hard to picture the old mobsters here, cigar in one hand, whiskey in the other. “The decor here is phenomenal, their whiskey selection is incredible and it’s a vibe you otherwise only find in private clubs. It’s open past midnight and attracts an after-work crowd. I do a lot of events here, and so do other companies,” Matthias explains. A few years ago, Davidoff celebrated Avo Uvezian’s 90th birthday there. At the table next to us, Rob Robinson, the owner of Figaro Cigars, is enjoying a cigar. “This place reminds me of a very old-school cigar club where you can relax and have good conversations with random strangers,” he comments. It is a place for people of moderate consumption. With live music, it’s very much anchored in backroom business culture. “You often hear comparisons with this place and the TV series Mad Men,” Matthias discloses. 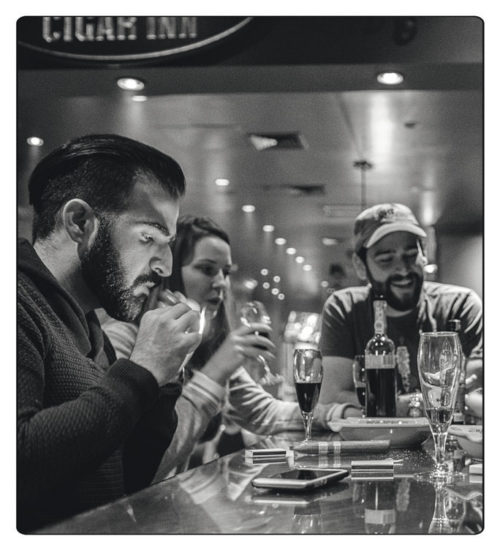 With stricter smoking rules, this is one of few places left in New York City where you can smoke and buy a drink. Matthias tells me that it is no longer possible to open up a cigar bar in the city. While lounges are still okay, they are not allowed to serve alcohol. He laments that, in the future, private clubs may be the only places left. Nat Sherman is not allowed to serve water to the public, and, except in Paley Park, a small park next to Davidoff on Madison Avenue owned by Bill Paley, owner of La Palina Cigars, smoking in parks is prohibited as well. A mix of heavy-handed regulation and a shifting consumer base has forced a few iconic cigar spots to close in recent years, like OK Cigars, Florio’s, Velvet Cigar Lounge, and Merchants NY Cigar Bar. Our last stop is Cigar Inn on 2nd Avenue, which was recently acquired by Casa de Montecristo/Altadis USA. “It’s a BYO place, and there’s a great liquor store next door, with the second- or third-best selection of scotch in the city. It’s a very social place with a mixed crowd. While I’ve had friends worried they didn’t dress up enough for the Carnegie Club, this is more open doors. It’s very relaxed and probably has the second-best cigar selection after Nat Sherman.” Again it’s a glimpse into New York, but a more modern version. “It’s away from the business center, so born-and-raised New Yorkers come here. Rudy Giuliani hangs out here, for instance.” As Matthias Clock runs into some old friends I leave him to it and head back to my temporary apartment. Places might be closing down, but having been shown the full span of cigar spots in New York, I feel fairly confident that the city that never sleeps won’t be shutting its eyes for some time to come. Not even when it comes to cigars. 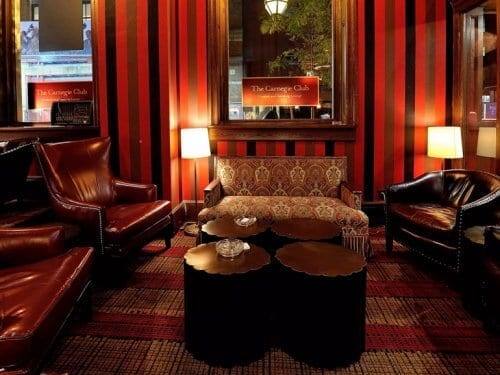 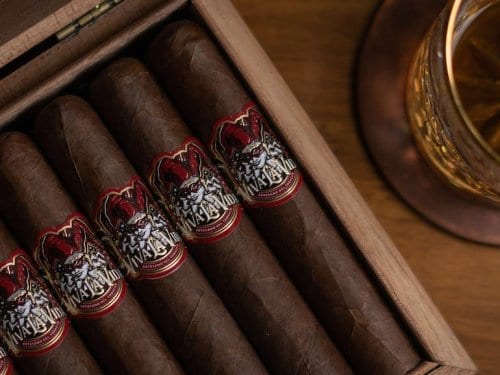 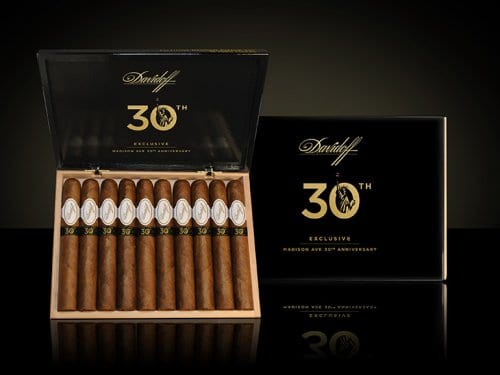 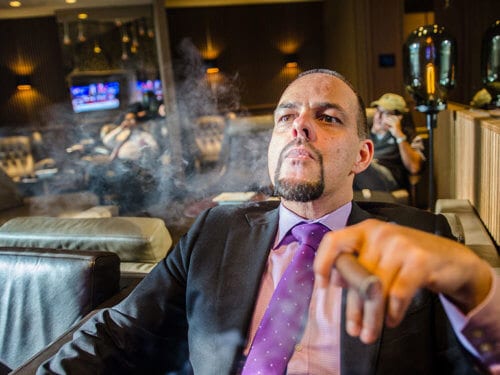