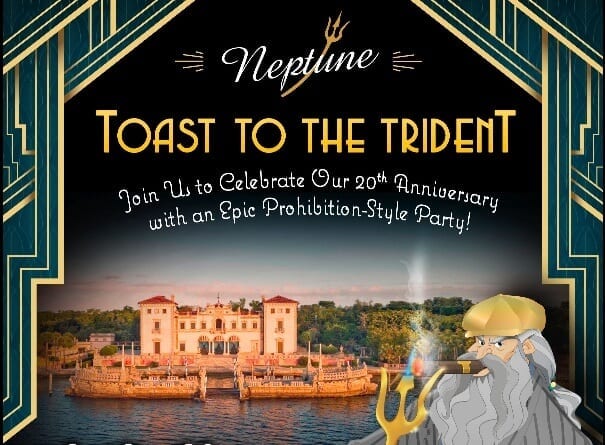 On Saturday, October 26, 2019, Neptune Cigar Superstore, the premier cigar store based out of South Florida, will be celebrating its 20th anniversary with an epic Prohibition-style party at Vizcaya Museum & Gardens, overlooking Biscayne Bay.

The 1920’s/Prohibition themed event will feature unlimited top shelf open bars with themed cocktails and cigar pairings, delicious passed bites and carving stations from Lasso the Moon – one of Miami’s top caterers, live entertainment, Casino-style table games, cigar girls, outdoor lounges and more. In addition, each guest will receive an assortment of complimentary premium cigars – 35+ cigars – to be enjoyed during the party or taken home in a branded souvenir bag.

Christophe Normand, Founder of Neptune Cigars, says, “The Toast to the Trident is our way of thanking the cigar-smoking community for their continued support these past two decades. If it wasn’t for their continued patronage, we would not be where we are today.”

The party is open to the cigar-smoking community and the general public as well.