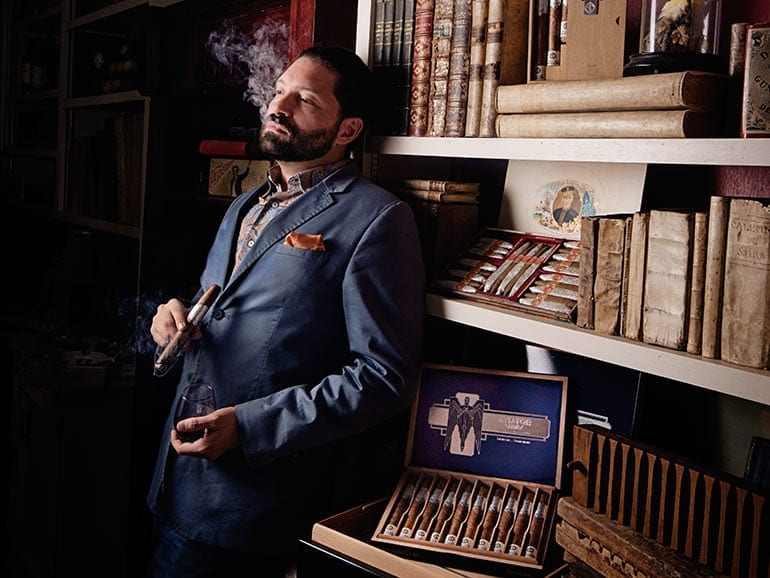 While everyday life seems to constantly speed, up, Darren Cioffi tends to go the other way. Darren is the world record holder for slow cigar smoking. This past summer in Paris, Cioffi took 2 hours, 50 minutes and 9 seconds to smoke a Macanudo Inspirado Mareva (a 42 x 5 1/8 cigar) at the Cigar Smoking World Championship (CSWC) qualifier. Alas, while Darren holds the world record and was the world champion in 2014, he placed third in the finals in September 2016, losing to the Swiss competitor Mirko Giotto.

The finals this year were very stressful, Cioffi says. The cigars were extremely dense, and about 10 minutes into the competition he already knew he was not likely to win. According to Cioffi, the key to competing is paying attention. “Paying attention means different things to different people,” he explains. “You can pay reasonable attention while having a good time, or stare at the cigar for the two or three hours required to win these days. A cigar can go away at any moment, so pulling every second out of a smoke truly requires uninterrupted focus. It is, simultaneously, extremely fun and the world’s most boring activity.”

Yet, holding the world record is a good thing and Cioffi is going to semi-retire for the coming season. Instead, he’s going to concentrate on helping promote the Cigar Smoking World Championship. Qualifying tournaments are held around the world; most are in Europe, but three are in the United States.

“When you tell people about the CSWC they don’t quite understand it at first,” says Cioffi. “Once they try competing, they’re hooked. That’s why I love the qualifying tournaments because the local folks try it on a lark. Once they’re out of the competition, they talk immediately about what they will do differently next time. We are naturally competitive as humans. This is special because it brings a gentlemanly, competitive aspect to something that we all already love to share with others.” But in promoting the CSWC, his goal is two-fold – getting more people to compete and raising awareness for his Principle Cigars lines.

Based in Nashville, Principle Cigars is primarily a European line, though there are select retailers in the United States who carry them, such as Biggs in Chicago. The story behind the cigars is also interesting. In high school, Cioffi became fascinated with and started collecting and selling antique paper and documents. Particularly early cigar-label art and vintage cigars themselves. During college and grad school he traveled around the world tracking down this material and started smoking whatever outlandish cigars he could find. For 15 years he produced special cigars for himself, friends and family, never thinking he could be happy with the results if he made them commercially.

Then, in 2013, he met Hendrik Kelner Jr. – the son of tobacco guru Henke Kelner of Davidoff fame – who had recently opened his own factory [Kelner Boutique Factory (KBF)] in the Dominican Republic. Hendrik assured Cioffi he could maintain the quality on a larger scale but still utilize small groups of very special tobacco. The result was Principle Cigars.

The company name comes from Cioffi himself, who says he is a principled man. “I read a quote one day about the smart having plans while the wise have principles. I thought, ‘that’s a great name!’ It was clean and it embodied what I bring to everything I do.” Cioffi adds that his partnership with Kelner is fantastic: “Hendrik works hard, and everything coming out of his small factory is special. He’s been instrumental in helping us source some unique, very well-aged tobacco. He is conservative to a fault, which works perfectly with our tiny production runs.” 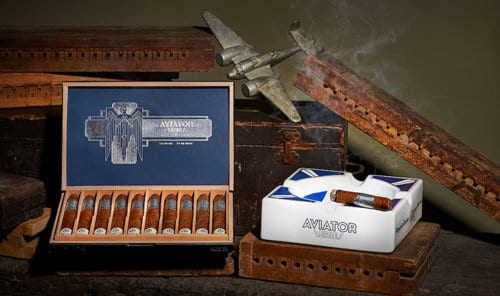 Cioffi says his Aviator Series continues to be produced, but is limited by necessity due to the rare tobaccos that are used. These are Principle Cigars’ most complex and vibrant blends. While each Aviator vitola is similar in spirit and style, the blends are different. The reason for this, explains Cioffi, comes down to one of pure logic. “You just can’t say ‘this is my Robusto and now I want it in a 6×60’ and [think] it’s going to work. Once you start changing the ratios – the filler to binder to wrapper – you need to tweak the blends, particularly when such flavorful tobaccos are involved. Does it not make more sense for each vitola to employ a blend designed specifically for the experience you wish it to deliver, rather than use another cigar’s adjusted recipe?”

Of each cigar, less than ten thousand are produced annually. The Envoi is a 5 x 50 Robusto; the Vainqueur, the flagship cigar of the line, measures 6 1⁄2 x 56; and the Cochon Volant is a 5 x 65 Figurado, which Cioffi says resembles a Flying Pig in that the tapering is exaggerated and it is sealed at the foot. There is another Aviator – the Grande Pyramide, measuring 71⁄2×60. At USD 25.00 (EUR 22.00) per stick, this is the most expensive cigar of the line. But then again, it’s also the most limited. It is a special five-country blend, and only 10 cigars are rolled per day by the manager of the Kelner Boutique Factory himself.

Principle Cigars has a secondary, more traditional line called Accomplice in which the blends remain the same across the vitolas. Accomplice has four different lines that each sport beautiful satin cigar bands. The Corojo blend has a purple satin band; the Maduro’s is green; the Habano’s white; and the blue satin band belongs to the Connecticut.

For the future, Cioffi says he is focusing on slow growth. “We’re excited to be at J.J. Fox and Harrods in the UK, both being the epitome of luxury retail in that part of the world.” He has partnerships with similar retailers around the globe and, in the coming year, he is going to focus even more on the European market. To that end, in Dortmund, Cioffi recently introduced to Europe the Frothy Monkey – created for the famous Nashville coffee house chain. It uses an exclusive Dominican Cotui wrapper that provides the bright flavor, with notes of citrus and chocolate.

The Frothy Monkey signature is a 5×40 cigar with a monkey tail on the cap and a retail price of USD 5.00 (EUR 4.50). But Principle Cigars is also looking at Asia, slowly driving growth in India, Singapore and beyond. Says Cioffi, “It’s exciting in that there’s a huge opportunity for growth in markets where smokers are just beginning to appreciate the exceptional non-Cuban options available to them.”