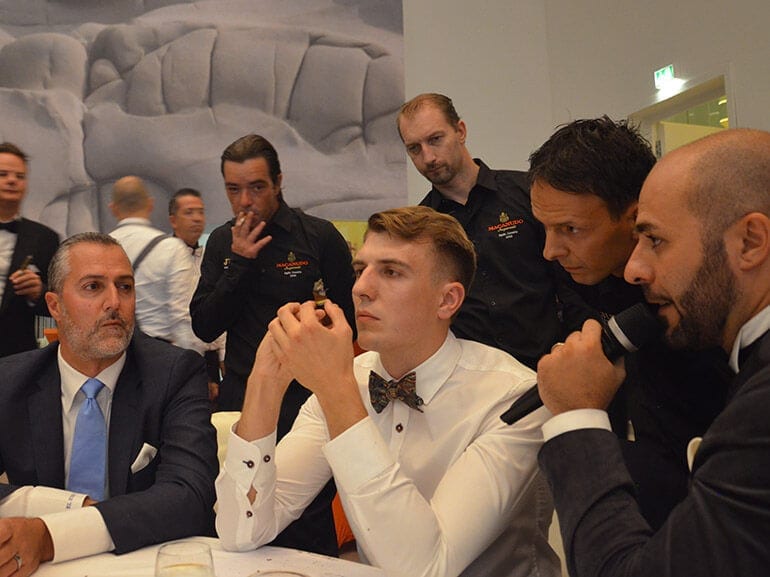 The grand finale of the Cigar Smoking World Championship (CSWC) is almost here. This year, the event deserves an epithet like “grand finale” more than ever. Exciting qualification tournaments have been held in 17 famous world cities like Paris, Rome, Chicago, Warsaw, New York City …

The world records in slow smoking have been broken several times in 2016 and the titles were switching like a seesaw between the U.S.A and Russia. The best results have pushed the benchmark well beyond the 2-hours-mark. “This is only part of the excitement that the last season has brought us”, says Marko Bilić, founder of the CSWC and he adds: “The quality and stability of the new competition cigar, the Macanudo Inspirado, certainly contributed to the results and gave fare chances to all the competitors.”

The 2016 season will be remembered for the big fights between two world’s slowest cigar smokers Oleg Pedan of Russia, the current world champion (in picture) and, Darren Cioffi (USA), world champion of 2014. In 2016, they broke the world record five times. Darren Cioffi did so in Sweden, where he had already set a record in 2015. Ten days later, the 2015 world champion Oleg Pedan won the Russian national tournament in St. Petersburg and took back the world record. Two months later, in Chicago, Darren Cioffi set a new record again but Pedan was not waiting for long. He competed in Tallinn, Estonia and magnificently achieved a new world record. In Paris, the American Darren Cioffi took 2 hours 50 minutes and 9 seconds to smoke a Macanudo Inspirado Mareva – another record time.

The Cigar Smoking World Championship 2016 will be held on the first weekend of September in Split/Croatia. And it might end with yet another world record, but maybe not. There are several in the list of the top 20 smokers who are capable to take the title. (rcw)