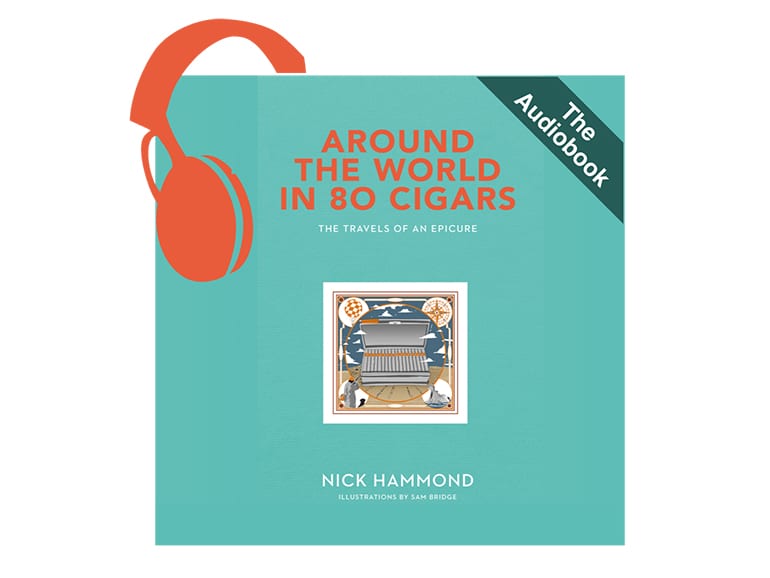 For a limited time (only 3 weeks from today … until May 6, 2021) Cigar Journal readers get the audiobook for only GBP 3.99! Hurry and download the book NOW at www.nick-hammond.com. Your coupon code is SUB399.

Following hot on the heels of the worldwide success of Nick Hammond’s cigar travelogue, Around The World In 80 Cigars – The Travels of An Epicure, comes the audio version – read by the author himself.

Nick gives more than five hours of unabridged reading from the book in the new release, which is available worldwide via audio download, priced just GBP 5.99.

The original book, Around The World in 80 Cigars, has been hailed as a first of its kind and an instant classic since it was launched at the end of 2019. Combining Hammond’s unique perspective as both a professional journalist, reporter, traveller and world-respected cigar authority, it features tales of poignancy, wit and wonder.

With locations from across the globe, from Africa to Borneo, USA to the Maldive islands, this unique travelogue is a compilation of more than 25 years of exploring the planet – and enjoying good cigars. There are extensive chapters on cigar-producing countries like Cuba, Nicaragua and the Dominican Republic, as well as visits to the set of Star Wars in Tunisia, the minefields of Bosnia and the dangerous coast of South Africa where Great White Sharks patrol.

Now you can hear these remarkable stories in the voice of their creator. To download your copy, visit www.nick-hammond.com/audiobook

Nick Hammond is known worldwide among the cigar cognoscenti and has worked with a number of cigarmakers, brands, magazines, retailers and publications within the industry. He was commissioned by Joya de Nicaragua, the country’s oldest factory, to write their story in Cinco Decadas: The Rise of The Nicaraguan Cigar; won the inaugural Spectator Magazine Cigar Writer of the Year Award in 2013; hosts his own podcast – also called Around The World in 80 Cigars – which has attracted 20,000 listeners in more than 70 countries; and regularly hosts and presents live and ticketed online and in-person events featuring guests from around the world. Aside from cigars, Hammond is a sought-after freelance writer, host and consultant, and in 2020 collaborated with Luxury label Leggets to create the Leggets x Nick Hammond Collection. The launch product was a first – an English gin, blended by Hammond, and designed to be enjoyed alongside a fine cigar.